I happened upon this image while looking for a United States Patent related to a future post.  My first thought, this could easily be a piece of modern art.  I was not surprised that the patentee was from York, PA, because that was one of fields I’d specified in my search.

The Hench & Dromgold Company made agricultural implements in York, PA.  S. Nevin Hench and Walker A. Dromgold were the owners.  Their company was located at the northwest corner of North Hartley Street and the Railroad Tracks.

The seat in the illustration was used in horse drawn agricultural implements produced by Hench & Dromgold, however this is the same basic seat design that later appeared in many early tractors.  Walker A. Dromgold stated in this patent:

This invention relates to improvements in chairs, and particularly to that class known as “park or lawn seats.”  The object of the invention is to produce a chair which will yield to the weight of the occupant.

Furthermore, the object is to produce a chair composed of iron, in which the legs, seat, and back are clamped in place by a single bolt, which arrangement simplifies the construction and makes it comparatively inexpensive.

Futhermore, the object of the invention is to produce a novel form of back in which an upper portion is arranged with a yielding or spring connection attached by the bolt above referred to.

Finally, the object of the invention is to produce a chair of few parts, which will prove strong, durable, and efficient, as well as satisfactory in use.

The drawings page from United States Patent No. 644,506 follows: 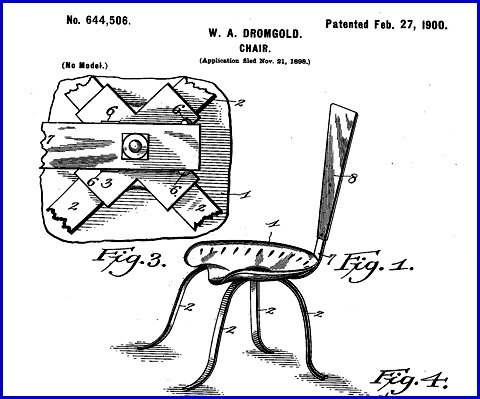 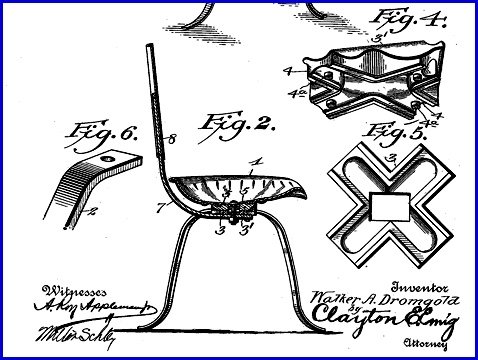