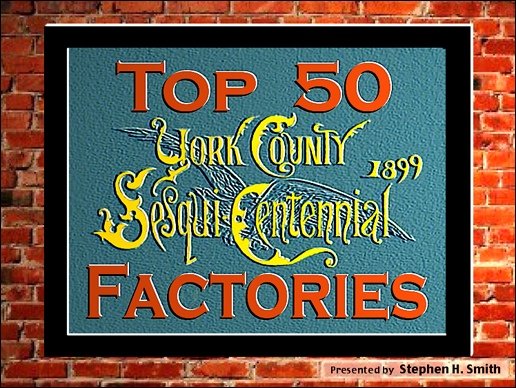 I used employee data from the 10th Report of the Pennsylvania Department of Factory Inspection to rank the 479 York County factories by numbers of employees; #50 has 47 employees, on up to #1 with 510 employees. Employee counts in these reports are from state inspector visits that examined employee records and are claimed to be more accurate than Chamber of Commerce or Manufacture Association publications, which tend to significantly round-up employees counts.

This post provides condensed highlights for the top 10 factories. These highlights are followed by links to all of the 50 top factories during York County’s Sesqui-Centennial.

Of the six original founders of the York Manufacturing Company, Jacob Loucks was the sole remaining founder with the company after 1880. Loucks was the individual responsible for getting the company into the ice making business; selling their first machine in 1885. This turned out to be an expensive move that nearly bankrupt both the company and Jacob Loucks; however it was a necessary move, otherwise YORK Air Conditioning may have never happened. From only 50 employees prior to the hiring of Thomas Shipley as General Manager in 1897, the company went through a ten-fold expansion of their workforce in only two years. By 1899, the York Manufacturing Company had skyrocketed to become the second largest factory employer in all of York County.

By 1899, the Martin Carriage Works in West York had grown to become the third largest factory employer in all of York County. Milton D. Martin established this company in 1888. This post takes the reader through company highlights until the successor Martin-Parry Corporation moved out of York County in 1946. Most Yorkers know Milton D. Martin today via his bequest establishing the free public Martin Library on the corner of Market and Queen Streets in York.

#7 York Rolling Mill in Spring Garden Township; site of a Massive Explosion in 1908

The York Rolling Mill was established in Spring Garden Township three years after the end of the Civil War. By 1899, it had grown to become the seventh largest factory employer in all of York County. After a massive explosion on August 10, 1908, all useable equipment from the site was moved to a Susquehanna Iron & Steel Company mill in Columbia. The remains of the damaged York Rolling Mill building were demolished and the factory was never rebuilt.

The York Carriage Company was established during 1889, at 158-160 North George Street in York. That location is presently occupied by the Pullman Building; housing the Pullman Apartments at 238 North George Street. Don’t be misled by the different street numbers; between then and now, the street address numbers changed in York.

The following are links to all of the 50 top factories in York County at the end of 19th Century. As a group, these 50 factories provided employment for 6,215 people in York County during 1899.