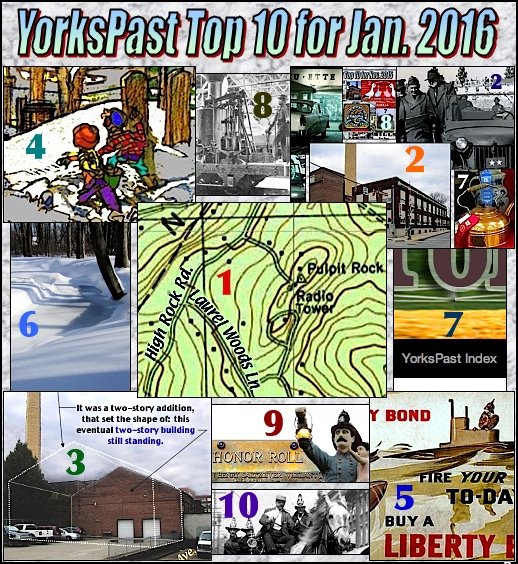 Near the beginning of every month, I’m sharing with my readers the top 10 posts from the previous month. This single graphic, features illustrations from all top 10 posts; however giving greater space to the higher ranked posts. These are your favorites during January 2016:

3—Edison Lights Streets as York becomes a City. On January 11, 1887, York was incorporated as a City. The same year marked the replacement of gas lighting with Edison electric lights on the streets of York; necessitating an addition to the 2-year-old electric generating station along Gas Avenue. This is Part 3 of an industrial chronicle of the buildings on that property recently purchased by the York County Heritage Trust, with their goal of renovating the buildings into a York County History Center.

4—SNOW WARS—Snowball Battles of Yesteryear. Cliff Satterthwaite’s snowball fight artwork brought back memories of the semi-organized snowball battles of my youth. These began when I was in third-grade; upon our families’ move to Springettsbury Township. Two teams were selected among the neighborhood children. We’d have a set amount of time to build the snow forts and then a set amount of time to do battle with the snowballs. On the honor system, individually we kept track of the number of times we were hit with a snowball. Every so often, we’d have a truce to add up the hits; thereby keeping running team scores during the battle.

5—German Submarine Mailed Letter at Newport then Sank 6 Ships. A York Daily account of a German submarine entering Narragansett Bay and dropping anchor in the harbor at Newport, Rhode Island, during the second year of WWI. The captain of the submarine was transported to shore, mailed a letter to the German Ambassador. The following day, in the Atlantic Ocean, just outside the three-mile territorial limit, the submarine sank six commercial ships; of British, French and Danish registry.

6—Stony Brook, Stony Run and the Trolley. In 1882, the Stony Brook area, in what is now Springettsbury Township, received its name from Stony Run; the stream running through that area. Trolleys ran from the City of York to Wrightsville, passing through Stony Brook in Springettsbury Township.  Trolley service in and near the City of York existed from August 18, 1892 until February 4, 1939.  However the York to Wrightsville trolley was in service for a shorter time span, from May 21, 1904 until February 1, 1933.

7—Reading the HEADLINES: An Index to ALL YorksPast posts.  This link is on the YorkBlog menu bar and at the end of every post; providing a linked quick view of all the YorksPast Headlines. I continually get complimented on this feature; one reader summed it up, “It’s just like reading the headlines on various pages or sections of the newspaper.” She liked using my listing of headlines sorted into broad categories; especially the ability to virtually see all headlines in each section, all at one time.

8— Phineas Davis designed Grasshopper Locomotives. Andrew Jackson was the first sitting president to ride on a railroad. The locomotive pulling that train was a “Grasshopper” type, designed by Yorker Phineas Davis.

9— Memorials to Firefighters and to Mack the Fire Horse. In 1900, the Rescue Fire Company constructed a Firemen’s Monument on Penn Commons. In a June 1928 meeting, the Rescue membership agreed to remove its name from their monument on Penn Commons and share it with the other city fire companies. The memorial to York firefighters, who lost life while in active service, is now located next to the York Fire Museum, 757 West Market Street.

10—Exploits of Mack the Noble Fire Horse. “Mack” was the veteran hose carriage horse of the Rescue Fire Company on South George Street in York, PA. For 25 years “Mack” served the Rescue firemen faithfully, for a large part of that time being their only hose carriage horse. “Mack’s” remains are presently interred next to a monument, in his memory, at the York Fire Museum, 757 West Market Street. 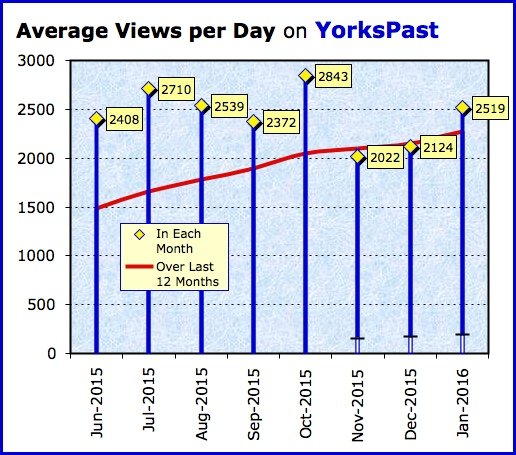 If you are reading this on the Ydr.com site, click on this LINK for a Full View of the illustrations in this post on the original YorkBlog site; since the Ydr.com site will occasionally cut off important details in the cropping of illustrations. Thanks for your understanding as the York Daily Record continues to work with USA Today in solving this problem of butchered illustrations.