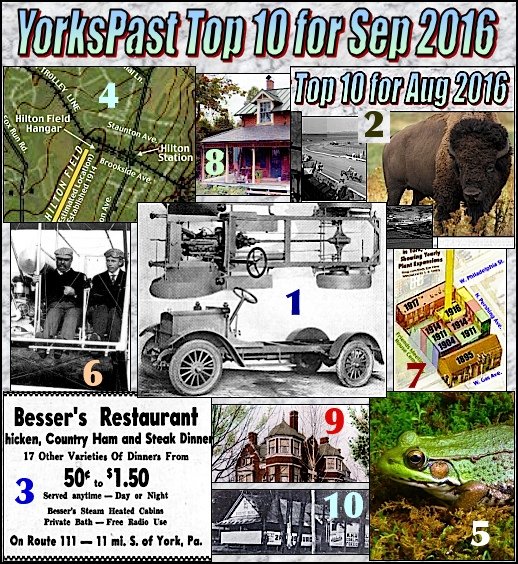 These are your favorites during September 2016:

1—Hoover Worn Drive Truck debuts at 1916 York Fair.  Hoover Wagon Company advertised “Do Not Fail To See The HOOVER WORM DRIVE TRUCK at the York Fair—Main Building Annex. BUILT IN YORK.” This York Daily ad appeared during the York Fair 100-years-ago, i.e. in 1916; when the fair was held in early October. The appearance at the fair marked the debut of the first Hoover Truck built entirely in York; since the companies’ automotive line previously involved purchasing a Ford chassis and added a Hoover commercial body. This post contains a trade publication review of Hoover’s newest product, along with illustrations.

3—Remembering Besser’s on the Susquehanna Trail.  Liz Holtzapple provided some neat memories of Besser’s, which began as a 1934 Esso Service Station, 11-miles south of York, on the Susquehanna Trail in Shrewsbury Township, York County, PA. It quickly evolved into a destination, with the addition of Tourist Cabins, a Department Store, a Restaurant and a Park.

5—Zion View’s Green Frog BBQ on Labor Day.  Zion View is located 6-miles north of York, in Conewago Township; along the Susquehanna Trail at Canal Road. Kathy Mummert’s grandfather worked in the cigar industry at Zion View; he shared with her the story of the Green Frog Bar-B-Q. Her grandfather emphasized it “was THE event of the year in Zion View.” This post contains Kathy’s memories of what her grandfather told her and my findings.

6—York County’s First Airplane Passenger was Charles Eastlack.  On June 19th 1914 a Wright Brothers Model B Flyer took off from Hilton Field, in Dover Township, carrying York County’s First Airplane Passenger, Charles Eastlack. The Wright Brothers manufactured about 100 of their Model B Flyers between 1910 and 1914. It was their first passenger-carrying airplane; capable of carrying one passenger, nestled side-by-side, between the motor and the pilot.

8—1860 Buildings 51-60 in West Region of Springettsbury Township.  Using Shearer’s 1860 Map of York County, I identify ten 1860 buildings in the Pleasureville region within what is now Springettsbury Township. These 1860 dwellings are matched to the families resided in them; utilizing the 1860 United States Census. I also examine John Cunningham’s residence in greater detail; he cleared much of his 104-acres in the area, where he also built three more dwellings also appearing on Shearer’s 1860 Map of York County.

9—Lafean and York Fair of 100-Years-Ago.  Daniel F. Lafean hosted Pennsylvania Governor Martin G. Brumbaugh at his residence during the governor’s visit to the 1916 York Fair. Lafean was a politician, banker and manufacturer. His vast York residence was located on the northwest corner of West Market Street and Richland Avenue. Lafean entertained a host of leading state and national politicians at this residence, including two presidents; Theodore Roosevelt and William Howard Taft.

10— Red Lion Fair ran 8 Days in August of 1924.  During 1924 the Red Lion Fair opened on Saturday August 16th in Fairmount Park and ran 8-days; closing the following Saturday. This was the first year that the Red Lion Fair was held both day and night. The fair included the staples: food, games, rides and entertainment. Exhibition buildings held commercial exhibits; while automobiles were exhibited in large canvas tents. In 1924, 55% of the exhibitors were from York, 40% were from Red Lion and the remaining exhibitors were from Dallastown and Yoe. 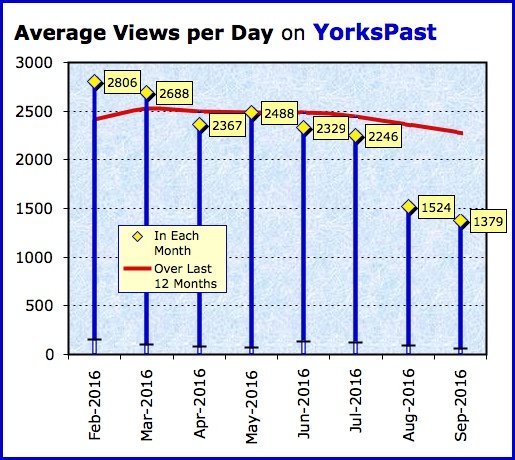 Links to the Top 10 Posts for the 11 most recent months: