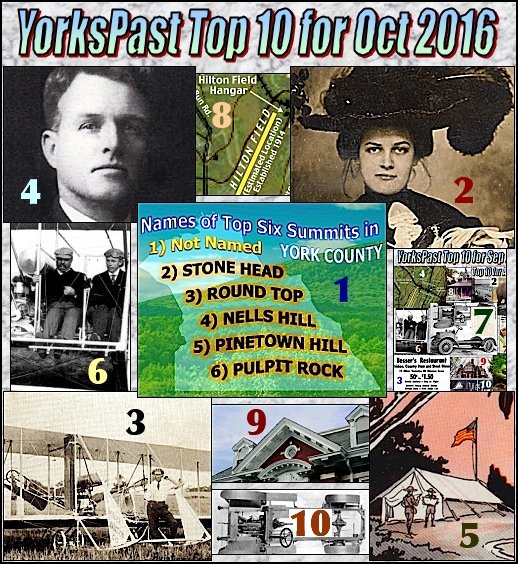 These are your favorites during October 2016:

2—Gilbert Sisters in Big Hats.  A 1909 photo of Gilbert sisters in big hats came to mind when considering a Millinery illustration for a future post about York County’s first female airplane passenger Edith M. Hitchcott; a second generation Milliner in York. A Milliner is a creator and dealer in women’s hats. In our family the Gilbert Sisters picture is known at the “Big Hats Photo.” The Gilbert Sisters are three of my Great-Aunts; i.e. they are the sisters of my Grandmother Iva Gilbert Smith.

3—Motter’s 1914 photos of Wright Flyer at Hilton Field.  During a June weekend in 1914, a Wright Brothers Model B Flyer took off repeatedly from Hilton Field carrying York County’s first airplane passengers; one at a time. The flights were at a newly constructed airfield, on property of George F. Motter, in rural Dover Township. George F. Motter shared a dozen photographs of the activities from that 1914 weekend, at Hilton Field, with The Gazette and Daily in 1935.

6—York County’s First Airplane Passenger was Charles Eastlack.  On June 19th 1914 a Wright Brothers Model B Flyer took off from Hilton Field, in Dover Township, carrying York County’s First Airplane Passenger, Charles Eastlack. The Wright Brothers manufactured about 100 of their Model B Flyers between 1910 and 1914. It was their first passenger-carrying airplane; capable of carrying one passenger, nestled side-by-side, between the motor and the pilot.

9—Dempwolf drawings of Laing Mansion.  John A. Dempwolf’s original drawings for the Springettsbury Township retirement mansion of West Virginia coal baron John Laing are in the Collections of the York County History Center. The first floor includes: a living room, a parlor, a library, a dining room, a kitchen and a pantry. The second floor includes six large bedrooms and three complete baths. The Dempwolf drawings are not dated, however newspaper articles confirm they were created in 1906. The Springettsbury Township building still standing at 2025 East Market Street.

10—Hoover Worn Drive Truck debuts at 1916 York Fair.  Hoover Wagon Company advertised “Do Not Fail To See The HOOVER WORM DRIVE TRUCK at the York Fair—Main Building Annex. BUILT IN YORK.” This York Daily ad appeared during the York Fair 100-years-ago, i.e. in 1916; when the fair was held in early October. The appearance at the fair marked the debut of the first Hoover Truck built entirely in York; since the companies’ automotive line previously involved purchasing a Ford chassis and added a Hoover commercial body. This post contains a trade publication review of Hoover’s newest product, along with illustrations. 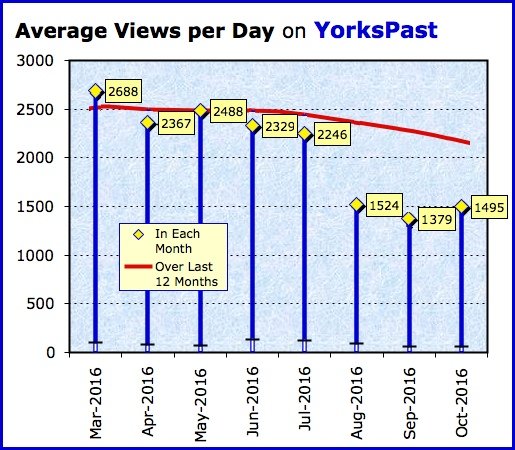 Links to the Top 10 Posts for the 12 most recent months: