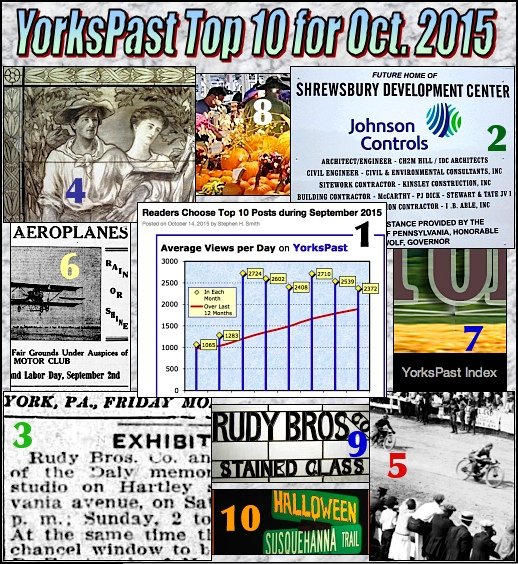 Near the beginning of every month, I’m sharing with my readers the top 10 posts from the previous month. This month, I’ve initiated a single graphic, featuring illustrations from all top 10 posts; however giving greater space to the higher ranked posts. These are your favorites during October 2015:

5—Unplanned Motorcycle Races at York Fairgrounds in 1912. On Labor Day, September 2, 1912, during the intermission between the flights at the Aviation Meet within the York Fairgrounds, an extra attraction, not on the program, was introduced, in the form of motorcycle races by local amateurs. Two five-mile and a ten-mile race were run. Stewart Boeckal, of 297 West Market Street, won two of the three motorcycle races with his single cylinder Indian Motorcycle. Carl Rudy took first place in the other five-mile race with his twin cylinder Thor Motorcycle.

7—Reading the HEADLINES: An Index to ALL YorksPast posts.  This link is on the menu bar and at the end of every post; providing a linked quick view of all the YorksPast Headlines. I continually get complimented on this feature; one reader summed it up, “It’s just like reading the headlines on various pages or sections of the newspaper.” She liked using my listing of headlines sorted into broad categories; especially the ability to virtually see all headlines in each section, all at one time.

9—Stained Glass Windows for Mausoleums were Big Business for Rudy Bros. Co. I did some Rudy Brothers research at the Detre Library, housing the Archives Division of the Historical Society of Western Pennsylvania, within the Heinz History Center in Pittsburgh. Stained-glass windows for mausoleums grew to become big business for Rudy Bros. Co.; peaking during the 1920s. One piece of Rudy Brothers correspondence dated May 19, 1919, in the collections of the Archives, mentions the Community Mausoleum in York, PA.

A big THANK YOU to All My Readers

You’ve pushed YorksPast readership to a new high during October 2015. Several readers suggested this idea: Click on this LINK for a Full View of the illustrations in this post. I used it in a post last week and I’ve already received many compliments for including this link; since the ydr.com site will occasionally cut off important details in the cropping of illustrations. 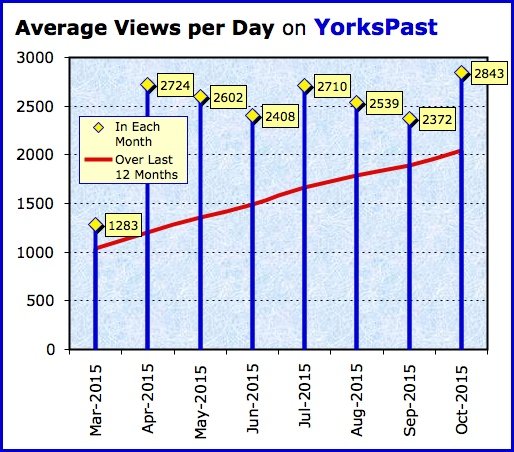