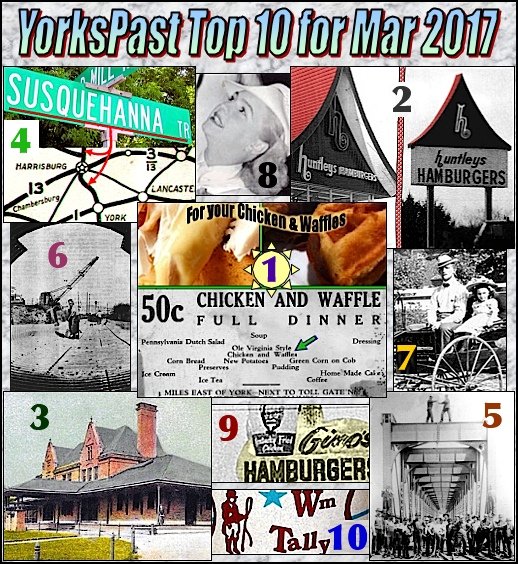 These are your favorites during March 2017:

1—Chicken & Waffles at Ye Olde Valley Inn.  A chicken and waffle full dinner cost 50-cents in 1915 at Ye Olde Valley Inn along the Lincoln Highway, 3-miles east of York, in Springettsbury Township. Ann Turner remembered her grandmother telling a tale of her younger years in the area, when people came from all over, including Lancaster County, for the unique chicken & waffles sold at Ye Olde Valley Inn. Ann wondered maybe they were unique because the waffles were served with fried chicken, like almost everywhere else in the country, except Central Pennsylvania where waffles are instead smothered with shredded chicken and gravy.

3—Yorker shares excitement of vacations a century ago.  In 1961, a Yorker wrote of his 1910 experiences as a youth in traveling alone via train and stagecoach to his grandparents’ farm in Adams County. He recalled, “I think the reason I got so excited last week about the tearing down of the old Western Maryland Railway passenger station on North George street was because that was the place, many, many years ago, that I used to get on the train to go on my Summer vacation. Looking back, I believe that the thing that made that trip so exciting and wonderful was that I was permitted to make it alone.” Read the whole letter, containing the adventures of a York city boy traveling to and vacationing on a farm over a century ago.

5—How a mile long river bridge was built in 21 days.  A photo of the mile long steel railroad bridge over the Susquehanna River, linking Wrightsville and Columbia, is believed to include some of the workmen that erected the bridge in 21 working days during 1897. The Pennsylvania Railroad used the divide and conquer method to accelerate bridge construction.  The railroad utilized two bridge building companies, Pencoyd Iron Works and Edgemoor Bridge Works, each with a responsibility to simultaneously build one-half of the bridge across the Susquehanna River. Competition and the fear of being the company that lags behind in holding up its end of the schedule are significant motivating factors. Read details about the building of the 1897 bridge per information supplied by Wm. A. Pratt; engineer of bridges for the Pennsylvania Railroad.

6—Naming of Three Mile Run waterway in Springettsbury.  Three Mile Run waterway crosses under East Market Street, Northern Way and Eastern Boulevard in Springettsbury Township. In the 1800s, this waterway was so named because the distance from this York and Wrightsville Turnpike crossing point to the square in York is 3-miles. The stream likely took on such a name due to the neighboring inn along the York and Wrightsville Turnpike; the Three Mile House. In the early Twentieth Century, that establishment was renamed Ye Olde Valley Inn, whereas the waterway continued to be identified as Three Mile Run. In 1969, Three Mile Run was placed completely underground between East Market Street and Eastern Boulevard, so as to construct Northern Way between these roads.

7—Dr. Spotz off on house calls in 1900.  Shelly Riedel submitted a photo of Dr. Spotz when he practiced in Hampton, Adams County, PA. In the photo, G. Emanuel Spotz is driving a horse and carriage, while sitting beside him is his 5-year-old daughter, Marie McClure Spotz. In a few years, the doctor switched to the automobile as his mode of transportation in rural Adams County. In the spring of 1912, Dr. Spotz returned to college; taking post-graduate courses at the Jefferson and Polyclinic Hospitals in Philadelphia. On March 21, 1913, his license was transferred to York County, whereupon he established a medical practice in York and added even more horsepower to make house calls, per my post: Dr. Spotz used Race Car to make York County house calls.

8—Lilian Roye international horsewoman in Springettsbury.  Lilian was born in Copenhagen, Denmark. From an early age she excelled at training horses and soon was only entering horses in competitions that she had trained. Prior to WWII, Lilian was the All-Danish national jumping and dressage champion for six consecutive years. It was a time when these events were still dominated by military trained personnel. Lilian picked up more wins in competing throughout Europe. Lilian was the first woman to win the most difficult jumping event in all Europe, The Grand Prix de Luzerne in Switzerland. After WWII, Lilian turned professional, performing in circuses in Europe and the United States. Lilian announced her decision to make York her permanent residence in the States during a June 1950 horse show appearance for the York County Horsemen’s association. Her Springettsbury Township stables opened in 1951 and the full facilities of the Bri-Mar Riding Academy opened in 1953. The International Equestrian Organization was founded there in 1958. My post Bri-Mar track just off Lincoln Highway  contains aerial photos from 1957 and 1972.

9—Pennsylvania’s first Gino’s was in Springettsbury.  Share in the discovery of the deed where the owners of the property at 2500 East Market Street, in Springettsbury Township, leased that plot of land to “Gino’s No. 1 of Pennsylvania, Inc.” Additional research does indicate Pennsylvania’s first Gino’s Drive-In Restaurant was opened in the spring of 1961 directly across from the York County Shopping Center. This popular fast-food drive-in featured 15-cent hamburgers, 10-cent golden French fries and starting in 1962 also offered Kentucky Fried Chicken; all of this nearly a decade before the first McDonald’s was built in York County. 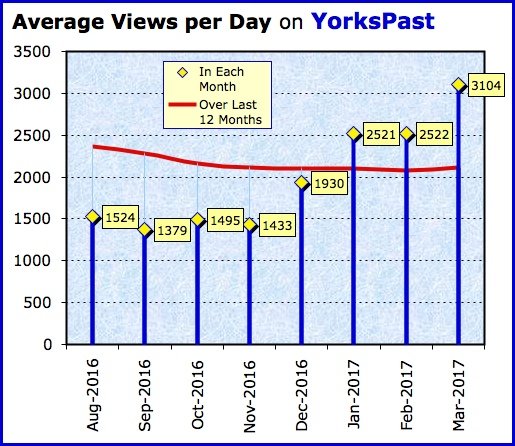 Links to the Top 10 Posts for the 17 most recent months: