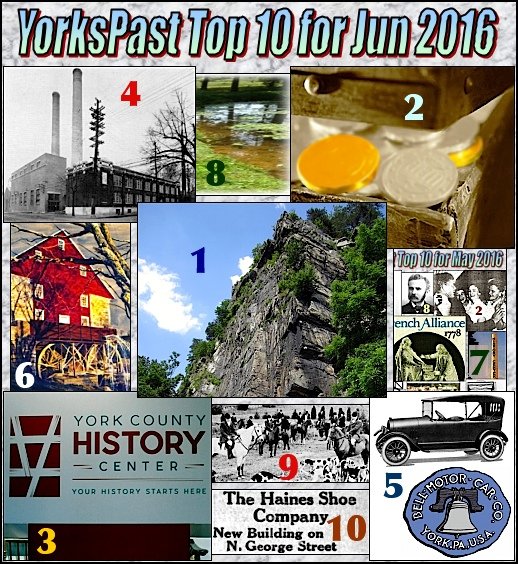 These are your favorites during June 2016:

2—Buried Treasure in Springettsbury Township.  A 1908 newspaper article describes another attempt to find the Rankin Treasure in Springettsbury Township, York County, PA. In 1778, James Rankin allegedly quickly buried a hoard of gold and silver on this property just prior to being arrested and jailed in Yorktown as a “traitor.” Rankin had remained a British loyalist during the Revolutionary War and was dubbed a “traitor” when he became involved in a conspiracy to bring the British troops across the Susquehanna River at the time when the Continental Congress was meeting in Yorktown during 1777-78. James escaped from jail and fled to the safety of British troops and thence to England; evidently planning an eventual return, to claim his buried treasure after the rebellion was squashed.

3—Your History Starts Here.  This is Part 10 of an industrial chronicle of the buildings on the property recently purchased by the York County Heritage Trust (now the York County History Center), with their goal of renovating the buildings into a York County History Center. Thursday evening, June 16, 2016, the York County History Center Brand Launch was moved from beside the former Edison Electric Plant into the Colonial Court House due to threatening weather. After a nice program and unveiling inside, the weather cooperated for a larger scale unveiling next to the former Edison Electric Plant. I liked the simple use of symbolized wood to create the “Y C H C” letters in the logo. The logo became even neater for me, after learning it was inspired by the exposed half-timber construction of the Golden Plough Tavern.

4—Twin Smokestacks at Edison Plant.  This is Part 9 of an industrial chronicle of the buildings on the property recently purchased by the York County Heritage Trust, with their goal of renovating the buildings into a York County History Center. In the post 100th Birthday for the History Center Chimney I wrote about the history of the twin smokestacks; i.e. a 188-feet high smokestack completed in December 1910 and a 182-feet high smokestack completed in July 1916. For at least 40-years both of these smokestacks stood together. Seven readers inquired if photos exist of the twin smokestacks. Photos from 1930, 1942 and 1945 are included in this post.

5—Car Manufacturing Factory planned in Springettsbury.  York County Deed Book 20D, Page 438; revealed on June 9, 1916, The Bell Motor Car Company purchased a factory site in East York from John H. Longstreet’s land development company. The site is located on the southeast corner of the Pennsylvania Railroad and North Hills Road. The “railroad depot” from a 1917 Bell Motor Car Catalog illustration of a new factory is therefore the neighboring Rockburn Station. Learn about the notable event, in area automobile history, that caused cancellation of the construction of this new Bell Motor Car plant in Springettsbury Township.

7—Readers Choose Top 10 Posts during May 2016.  Near the beginning of every month, I’m sharing with my readers the top 10 posts from the previous month. These were your favorites during May 2016.

8—Watershed Event at Wyndridge Farms on June 21.  A local historical perspective on residence in the Chesapeake Bay community was presented at Wyndridge Farms on Tuesday June 21st. The back yard of Wyndridge overlooks the Barshinger Creek Watershed; which was the focal point of this event; entitled Barshinger Creek: “From The Source To The Sea.” The principal speakers were Jack Grove, PhD, Marine Biologist and Dr. Harry Campbell, PA Executive Director Chesapeake Bay Foundation.

9—Rose Tree Fox Hunting Club moves to York County.  The Rose Tree Fox Hunting Club was established in the countryside west of Philadelphia in 1859. Last year Eleanor Boggs Shoemaker of Felton provided extensive comments  about the move of this club to York County in response to my query about Battle Hill One-Room Schoolhouse.  Jim Fry remembered his family flying in his Dad’s plane from Wilmington, Delaware, to Wellsville in the early 70s to attend the races at the club’s William duPont Jr., Memorial Steeplechase Course just west of Wellsville. They landed at a turf landing strip in Wellsville; possibly today’s Kampel Airport at 8930 Carlisle Road.

10—Haines Building on North George Street.  In 1915, the three-story Haines Building, at 231 North George Street, opened and served as the headquarters of The Haines Shoe Company. The first floor contained one of the several Haines Shoe retail stores in York. This John A. Dempwolf designed building no longer stands; it was torn down years ago, to create several off-street parking spaces. 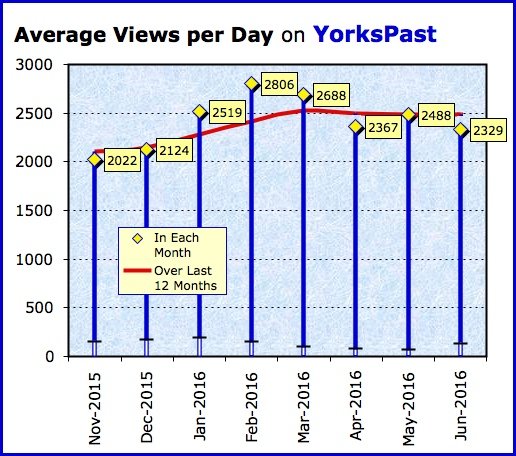