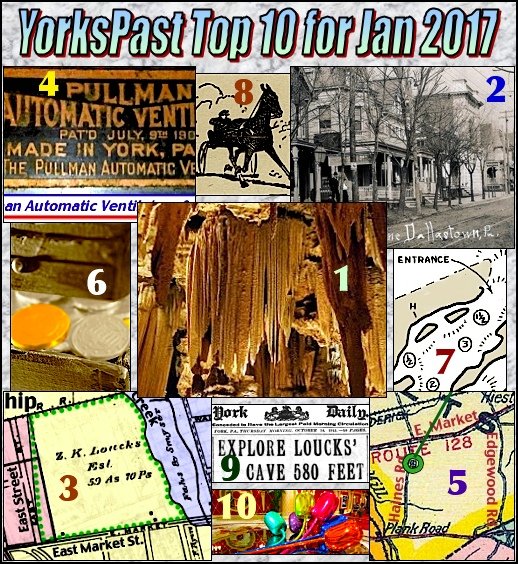 These are your favorites during January 2017:

1—Springettsbury’s 580-ft Cavern discovered in 1915.  Photos of Luray Caverns in Virginia brought back a memory from my Cub Scout days during the 1950s. At that time, an older gentleman told stories about a nearby cavern from his youth. Recently discovered 1915 newspaper articles revealed there was more truth to those stories then originally suspected. As additional newspaper articles were found, it appears this cave was actually located in Spring Garden Township; just over the township line with Springettsbury Township.

2—When Dallastown held a New Year’s Mummer’s Parade.  On New Years Day in 1914 Dallastown held their initial Mummer’s Parade. During the day, the parade covered all the streets of the borough; which were not yet paved in 1914. In the evening, “King Dodo” and his Mummers band marched to a reception held in their honor. The reception was held in an auditorium, located on the northwest corner of South Walnut and West Howard Streets in Dallastown. Built in 1906, that building primarily served as a 300-seat theater hall, showing silent films from 1906 to 1929.

3—Lead Clue leads to locating Loucks’ Cave.  In a comment to my initial post concerning the discovery of Loucks’ Cave, Jeri Jones of Jones Geological Services noted a clue, that popped out at him, was the mention of the lead discovery as being in the area of the cave. Jeri’s knowledge of lead finds in the county resulted in a search for this cave closer to the city limits. Combining that clue with newspaper leads and information in property deeds, pointed to this cave as being under the present front yard of the manufacturing plant at the north end of Ogontz Street; however the entrances have long since been back filled, possibly as early as 1920 when residential development started on the 59-acre Loucks’ Farm in that section of Spring Garden Township.

6—Buried Treasure in Springettsbury Township.  A 1908 newspaper article describes another attempt to find the Rankin Treasure in Springettsbury Township, York County, PA. In 1778, James Rankin allegedly quickly buried a hoard of gold and silver on this property just prior to being arrested and jailed in Yorktown as a “traitor.” Rankin had remained a British loyalist during the Revolutionary War and was dubbed a “traitor” when he became involved in a conspiracy to bring the British troops across the Susquehanna River at the time when the Continental Congress was meeting in Yorktown during 1777-78. James escaped from jail and fled to the safety of British troops and thence to England; evidently planning an eventual return, to claim his buried treasure after the rebellion was squashed.

8—Racing Horses at Haines Park in Springettsbury.  Haines Park was built by Mahlon Haines and was opened for harness and running horse races in 1928. The half-mile track was located in the area of the present intersection of Northern Way and Eastern Boulevard in Springettsbury Township. Sections of that track remained visible into the 1970s. Initially the Haines Park races were held every Saturday at 1:30 P.M.. Two years later, a full card of thrilling night races commenced, every Saturday Night and Holidays at 7:30 P.M. In 1930, Haines Park became the first track in Pennsylvania to hold weekly night races under electric floodlights.

9—Exploring Loucks’ Cavern to 580-feet.  George Figdore and Franklin Minnich equipped with lanterns and ropes, explored Loucks’ Cavern in October 1915 and were able to proceed farther than any of the previous exploring parties. They were able to inspect many large and beautiful chambers. They observed that the stalactites became more beautiful and more fantastical in their formations the farther they advanced into the interior. It also was found that the cave, after they had proceeded 200 feet, is free of accumulations of water. There was no more moisture than that found in the average cellar and some of the chambers are as dry as rooms above ground. George Figdore stated he will lead a well equipped party and as the party proceeds they will make accurate measurements; that follow-up exploration is described in the post: Mapping of Loucks’ Cavern east of York.

10—Jeff Koons’ $33.7 Million Dollar Tulips; from Germany to Las Vegas.  York County native Jeff Koons’ Tulips are on display in the Wynn Theater rotunda in Las Vegas. The 3-ton Tulips sculpture was installed early in 2013 after being acquired at Christie’s in New York for $33,682,500. These Tulips were put up for auction by the German bank Nord/LB. In 2002, Nord/LB acquired the Tulips sculpture from Jeff Koons for $2.5 Million. This sculpture was on display in the courtyard of the bank headquarters in Hanover, Germany for nearly a decade. In 2012, the bank decided to put the Tulips up for auction and use the proceeds to fund a cultural foundation. 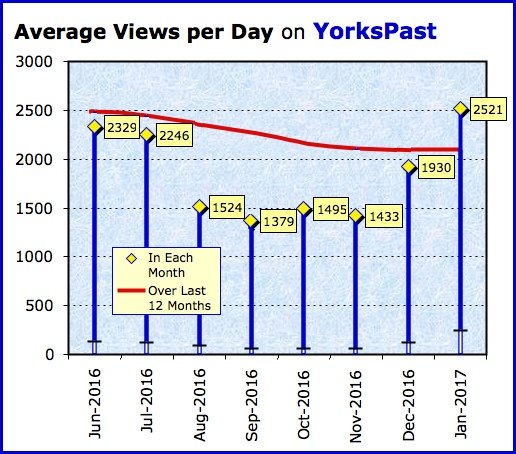 Links to the Top 10 Posts for the 15 most recent months: