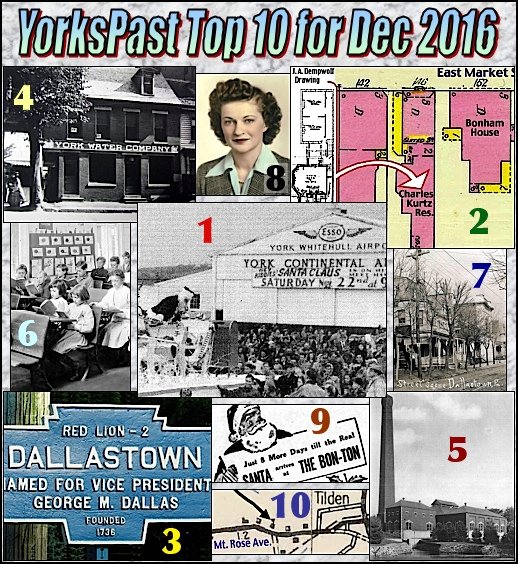 These are your favorites during December 2016:

1—Santa flight that started a York tradition.  Santa’s arrival by airplane at Valley Airways airport, in Springettsbury Township on Thanksgiving morning in 1946, started a York tradition. That year was the launch of over a quarter-century tradition involving Santa Claus’s arrival at the start of the Christmas shopping season in York, Pennsylvania. The arrival by airplane was followed by a parade to the downtown Bon-Ton Department Store. The festivities culminating with Santa climbing the Fire Company’s big aerial ladder into an upper story window to make his headquarters in The Bon-Ton Toyland.

3—Dallastown, Dallas and Geesey.  Following December’s Unraveling York County History ‘Heroes and Villains’ event, at Wyndridge Farm, I was questioned how I knew Adam F. Geesey was an owner of the Eagle Hotel in Dallastown; this post provides that documentation. The post also explores why Dallastown was named for Vice President George M. Dallas.

5—The York Water Company at 100-Years.  An article in the August 16th 1916 issue of the trade publication Fire and Water Engineering provided a detailed look at The York Water Company as it observed its 100th-year in 1916. One of the primary components of the Company in 1916, and continues to be today, is the Pumping Station on the east bank of the South Branch of the Codorus Creek a short distance above its junction with the West branch of that creek. Pumps in that station first went into operation in 1897; lifting water over 200-feet from creek elevation to the Company facilities on Reservoir Hill.

6—Upheaval at the One-Room Schoolhouse.  One of the neat things about December’s Unraveling York County History ‘Heroes and Villains’ event at Wyndridge Farm was meeting more readers who have shared memories appearing in my posts. I got to thank Brenda Knaub, in person, for her memory associated with the Longstown One-Room Schoolhouse,  when she approached me with a related question. Brenda asked, “what ever became of the school director who was arrested for his actions at the Longstown schoolhouse?” Discover the fate of school director Solomon Wambaugh in this post.

7—When Dallastown held a New Year’s Mummer’s Parade.  On New Years Day in 1914 Dallastown held their initial Mummer’s Parade. During the day, the parade covered all the streets of the borough; which were not yet paved in 1914. In the evening, “King Dodo” and his Mummers band marched to a reception held in their honor. The reception was held in an auditorium, located on the northwest corner of South Walnut and West Howard Streets in Dallastown. Built in 1906, that building primarily served as a 300-seat theater hall, showing silent films from 1906 to 1929.

8—Christmas Portraits at Loring Studios during WWII.  Mom (Esther L. Smith) sent Dad (Harold L. Smith) a Loring Studios portrait every Christmas that Dad served in the Army Air Corps during WWII; i.e. Christmas of 1943, 1944 and 1945. Even though WWII ended during September 1945, Harold continued to serve in Germany until March 11th 1946 and hence the Christmas photo of 1945. The majority of that time Harold was assigned to the 7th Liaison Squad in Germany. He returned to the U.S. and was discharged with the rank of Sergeant on April 2nd 1946. Directories indicate that Loring Studies was located at 146 East Market Street from 1941 to 1962. That was the address of Charles Kurtz [1857-1927] in my post Dempwolf building stood next to Bonham House.

9—The Real Santa visits York in 1957.  A Bon-Ton ad in 1957 emphasized “THE REAL SANTA will land at the York Airport, Thomasville, Saturday Morning, November 23, at 8 a.m.” I discovered this ad while doing a multi-year search of newspapers for my post: Santa flight that started a York tradition in 1946.  I was curious why “THE REAL SANTA” was highlighted in this specific Bon-Ton ad; it was the only ad, that I’ve discovered, where this emphasis was made. This post provides the story behind the Real Santa visiting York in 1957.

10—Ghost mystery of Longstown Schoolhouse solved.  Readers provided some neat reactions to my posts about the Longstown One-Room Schoolhouse in Springettsbury Township. Ted Fauth suggested, “A pictures is worth a thousand words. Why not show the 1938 aerial image of the schoolhouse?” Bob Taylor had a question that puzzled me, until Brenda Knaub came to the rescue with her memories of a schoolhouse fire. Linda Long provided enlightening comments about the ghost mystery of that schoolhouse. 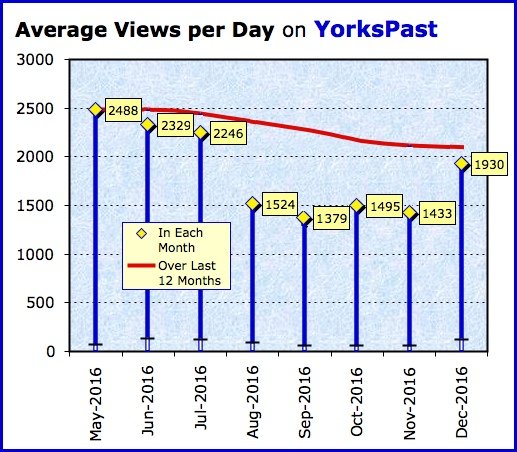 Links to the Top 10 Posts for the 14 most recent months: