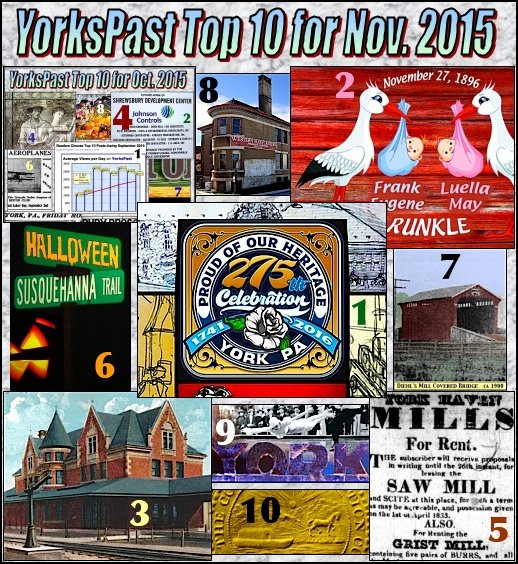 Near the beginning of every month, I’m sharing with my readers the top 10 posts from the previous month. This single graphic, features illustrations from all top 10 posts of November; however giving greater space to the higher ranked posts. These are your favorites during November 2015:

1—Initial YORK 275th Talk at York County Heritage Trust on November 14. This November 14, 2015, talk highlighted diverse and interesting facts of the manufacturing community of York County during the Gilded Age. However, as the City of York Celebrates its upcoming 275th Anniversary, the talk focused specifically on the top factories and industries based in the City of York.

2—The House of Twelve Twins. In 1902, newspapers around the world wrote about a house located midway between Stonybrook and Campbell’s Station, in Hellam Township, York County. They were reporting on a comfortable farm dwelling, which was known throughout the township as the House of Twelve Twins, because six sets of twins were born under its roof in eleven years.

5—The Massive Grist Mills at York Haven. Before the Power Plant and before the Paper Mill, York Haven had some massive Grist Mills, which contained five pairs of 7-feet Burr Stones. In grinding grain, the lower Burr Stone is stationary. The upper runner-stone must be balanced to ensure that it spins true. I can’t imagine the enormity of the task to get a 7-foot diameter runner-stone balanced so precisely to prevent any wobble. For in use, the gap between the stones is on the order of a piece of paper; and one never wants the stones to come into contact.

8—Western Maryland Railway Freight Offices. The Freight Offices of The Western Maryland Railway, dating to 1896, are partly boarded up, although still intact, in York, Pennsylvania. The building sits on the southwest corner of North George Street and the Codorus Creek. This would be a neat structure to repurpose, especially due to its close proximity to the baseball stadium.

10—Codorus Tow Path Railroad to Chickies. In 1825 a charter was granted to the Codorus Navigation Company to construct an 11-mile canal utilizing the Codorus Creek in York County, Pennsylvania. The canal opened in 1833. A tow path was situated on the east side of the creek and through a number of locks and dams, canal boats could navigate the 120-foot elevation difference between the City of York and the Susquehanna River. In 1894, the Western Maryland Railway planned construction of a railroad on the tow path, then bridging the Susquehanna River, to link up with the Reading Railroad system at Chickies in Lancaster County.

This chart tracks the level of my YorksPast readership. Click on this LINK for a Full View of the illustrations in this post; since the ydr.com site will occasionally cut off important details in the cropping of illustrations. 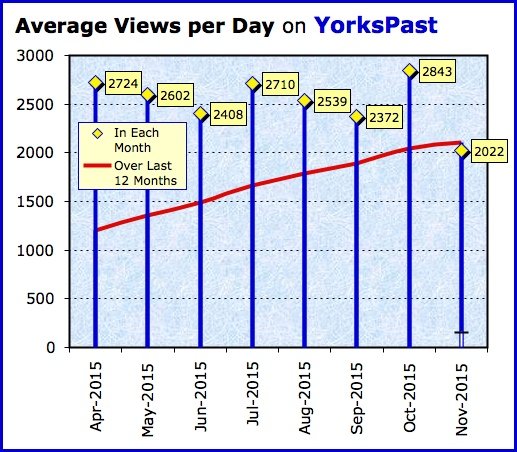