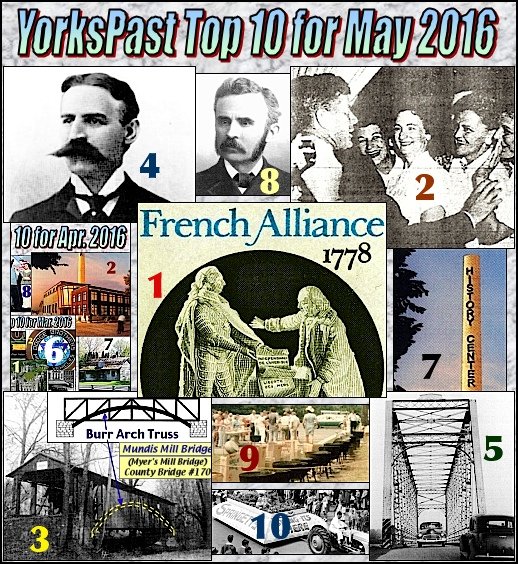 These are your favorites during May 2016:

1—French Alliance of 1778 ratified May 4th in York, PA. The Treaty of Alliance with France, during the Revolutionary War, was both signed in France and ratified by the Continental Congress while York, Pennsylvania, was the seat of government for the new nation. Without France’s significant military aid, provided by this treaty, it is doubtful that the Revolutionary War could have been won against Great Britain. The Journals of Continental Congress, Volume 11, page 418, records the actions taken in the Court House in York, on Monday May 4th, 1778.   Ultimately any misgivings with the treaty were overshadowed by the urgent need for military aid. After the Treaty of Alliance with France was “duly weighted and considered,” it was “Resolved, unanimously, That the same be and is hereby ratified.”

2—John F. Kennedy’s 24-Hours in Central Pennsylvania. The evening of Thursday September 15, 1960, an airplane carrying Democratic Presidential candidate Senator John F. Kennedy touched down in northern York County. A crowd of about 3,000 greeted Kennedy as he got off the plane at Harrisburg-York State Airport; now known as Capital City Airport. His arrival marked the start of a whirlwind 24-hours of campaigning in Central Pennsylvania, with stops in five counties: Dauphin, Lebanon, Berks, Lancaster and York.

4—Residence of Martin Library namesake built in 1895. The residence of Milton D. Martin sits a short distance west of the public library in York that bears his name. Milton occupied this residence for the last 17-years of his life. He died in his home on December 31, 1912. This building still stands today, at 145 East Market Street. To the upper right side of the front door, in the stonework, JAD initials with the year 1895 are carved; indicating the house was built in 1895 and designed by noted York architect John A. Dempwolf.

8—Birth of District Steam Heating in York. This is Part 7 of an industrial chronicle of the buildings on the property recently purchased by the York County Heritage Trust, with their goal of renovating the buildings into a York County History Center. In 1898, Adam F. Geesey was instrumental in the birth of the York Steam Heating Company to make use of exhaust steam; that would have otherwise been wasted at the Edison Electric Light plant. After electric generation ceased in 1959, the York Steam Heating Plant operated until 1977. These buildings housed the first electric generating station in York County. The buildings generated electricity for 75-years and supplied steam, keeping Yorkers warm for 80-years.

9—Evolution of Pleasureville’s Memorial Day Bean Soup. The annual Memorial Day Parade, celebration, and free bean soup event at Pleasureville had its origin in about 1866; in observance of the heroes and veterans who gave their lives in the American Civil War. The annual free bean soup event continues in honoring veterans of all wars. In 1981, 150-pounds of beef and 400-pounds of beans were the primary ingredients for the soup cooked over open fires in 16 large iron kettles.

10—Springetts Springtime Parade in the 1970s. Becka Hornsby of Sydney, Australia, submitted a photo of a Springetts Float after she discovered my post Springettsbury and the Knight, Sir William Springett. The maiden name of Becka’s mother is Springett. 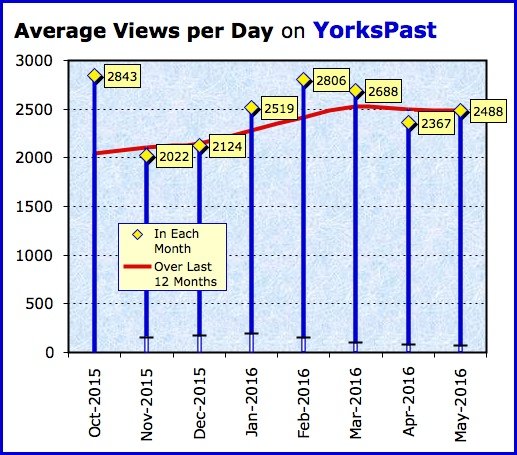