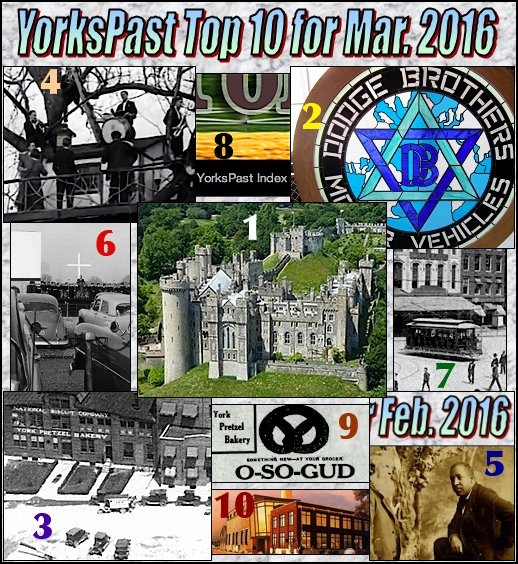 These are your favorites during March 2016:

2—D. E. Stetler, J. Horace Rudy & the Dodge Brothers Emblem.  The Dodge Brothers, John and Horace Dodge, utilized an emblem with interlocking triangles and interlocking “DB” starting with their first automobile production in 1914. Twenty-three year old Daniel E. Stetler obtained a charter dealership for Dodge Brothers automobiles and trucks in 1914. He initially operated that dealership in the Newberrytown area of northeastern York County, PA, and in 1923, D. E. Stetler moved into his downtown-York Dodge automobile dealership. That dealership was topped by a large J. Horace Rudy fabricated custom stained glass Dodge Brothers Emblem. The D. E. Stetler Dodge dealership operated at that location until moving to a bigger location along Roosevelt Avenue in 1990. In 1995, the downtown dealership building was repurposed and opened as the Susan P. Byrnes Health Education Center, which continues to educate thousands each year on the importance of a healthy lifestyle.

3—York Pretzel Bakery makes Billions Annually.  In 1914, the York Pretzel Bakery was established on a large empty lot at the southeast corner where Pattison Street crosses the Ma & Pa Railroad in the east end of York. As a still growing company, one-billion all-hand-formed pretzels were manufactured by the bakery during the year 1921. The bakery was sold to the National Biscuit Company in 1925; becoming their principal pretzel bakery until the 1960s.

4—Two British Films of the Hellam Love Nest.  Post contains links to 1928 and 1930 British films of the Love Nest; a honeymooner tree house perched over Kreutz Creek in Hellam Township, York County, PA. Katina Snyder of the Kreutz Creek Valley Preservation Society graciously provided YouTube links to two short films that British PATHE shot at the Love Nest. One of their members, Jeff Clinton, was analyzing the Kreutz Creek Presbyterian newsletters and discovered in the 1927 newsletter a mention was made that the PATHE film company was filming “The Love Nest.” That clue resulted in their Google discovery of the two YouTube videos.

6—Easter Sunrise Service in 1957 at the Drive-In.  Terry Downs shared some neat photos of a Drive-In Easter Sunrise Service that St. John’s Lutheran Church held at Stony Brook Drive-In Theatre in 1957. My favorite photo is a classic view of drive-in speakers hanging on the car windows, with the Rev. Enno A. Schmoock delivering the sermon, backed by St. John’s Senior Choir and the cross.

7—Edison Electric Plant becomes subsidiary of York Railways.  This is Part 5 of an industrial chronicle of the buildings on the property recently purchased by the York County Heritage Trust, with their goal of renovating the buildings into a York County History Center. In 1907, the buildings, at that time known as the Edison Light & Power Company, became a subsidiary of the newly named York Railway Company; which operated the electric streetcars, i.e. trolleys, throughout the city and county.

8—Reading the HEADLINES: An Index to ALL YorksPast posts.  This link is on the YorkBlog menu bar and at the end of every post; providing a linked quick view of all the YorksPast Headlines. I continually get complimented on this feature; one reader summed it up, “It’s just like reading the headlines on various pages or sections of the newspaper.” She liked using my listing of headlines sorted into broad categories; especially the ability to virtually see all headlines in each section, all at one time.

9—O-SO-GUD Pretzels originated in York.  The local York Pretzel Bakery branded their product O-SO-GUD Pretzels and protected that brand by being granted an “O-SO-GUD” trademark registration from the United States Patent and Trademark Office. The York Pretzel Bakery also pioneered an item we all know today as pretzel sticks; they were granted the “SLIM JIM” trademark registration for that product. The National Biscuit Company acquired the York Pretzel Bakery in 1925. The company, who eventually shorting their name to Nabisco, conducted an extensive country-wide marketing campaign in 1927 that featured “O-SO-GUD” Pretzels and “SLIM JIM” Pretzel Sticks.

10—100th Birthday for the History Center Chimney.  This is Part 6 of an industrial chronicle of the buildings on the property recently purchased by the York County Heritage Trust, with their goal of renovating the buildings into a York County History Center. When it came time to build the giant chimneys, for the coal-fired power plant in these buildings, the premier chimney builder in the United States was selected; the Alphons Custodis Chimney Construction Company of New York. The landmark 1916 chimney still stands and celebrates its 100th birthday during July of 2016. 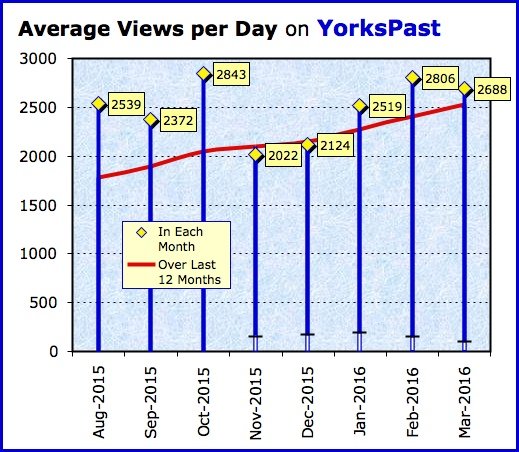