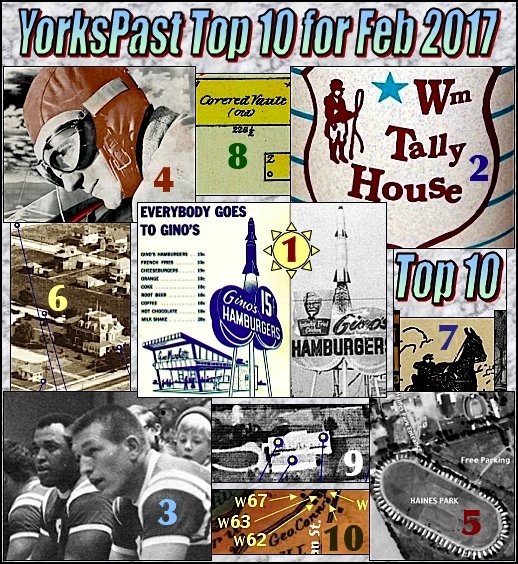 SYNOPSIS and LINK to Each FEBRUARY TOP TEN POST

These are your favorites during February 2017:

1—Pennsylvania’s first Gino’s was in Springettsbury.  Share in the discovery of the deed where the owners of the property at 2500 East Market Street, in Springettsbury Township, leased that plot of land to “Gino’s No. 1 of Pennsylvania, Inc.” Additional research does indicate Pennsylvania’s first Gino’s Drive-In Restaurant was opened in the spring of 1961 directly across from the York County Shopping Center. This popular fast-food drive-in featured 15-cent hamburgers, 10-cent golden French fries and starting in 1962 also offered Kentucky Fried Chicken; all of this nearly a decade before the first McDonald’s was built in York County.

5—Haines Park transforms into a Trailer Park.  Discover the transformation of the track at Haines Park into a mobile home park. House trailers sat along the outside edge of the half-mile track from 1953 until about 1966. This trailer park was located in the area of the present intersection of Northern Way and Eastern Boulevard in Springettsbury Township. In terms of a present landmark structure, the AAA building sits where the track infield existed.

7—Readers Choose Top 10 Posts during January 2017.  Near the beginning of every month, I share with my readers the top 10 posts from the previous month. This post contains a synopsis and link to each January Top 10 Post.

8—York High built on site of Old Vault.  In September of 1927 a new high school building opened in York, Pennsylvania. On that occasion, local aviator Karl Ort took an aerial photo that appeared in The York-High Weekly. William Penn Senior High School was built opposite Penn Park on the north side of West College Avenue, between South Beaver Street and Park Avenue. Just about where the entrance to the auditorium was located in the new high school building, a large covered vault had existed. The vault was approximately 75-feet long by 35-feet wide and was one-story high; how old and what was it used for?

9—Bri-Mar track just off Lincoln Highway.  Bri-Mar track was located just south of the Lincoln Highway near a York County mobile home park. This track was built in 1951 and existed until about 1990. Learn about the track and the horsewoman responsible for its construction; she was a celebrated international rider from Copenhagen, Denmark.

10—Buildings 61-70 in West Region of Springettsbury Township.  This is the 23rd post in a series where I match 1860 dwellings, identified on Shearer’s 1860 Map of York County, to the families resided in them; utilizing the 1860 United States Census. This post examines 1860 buildings at the southern end of Pleasureville and focuses on one of the inhabitants; Dr. George Conn, a prominent Nineteenth Century cancer doctor. 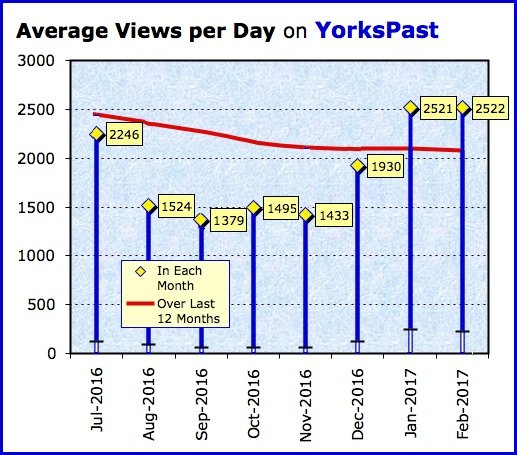 Links to the Top 10 Posts for the 16 most recent months: