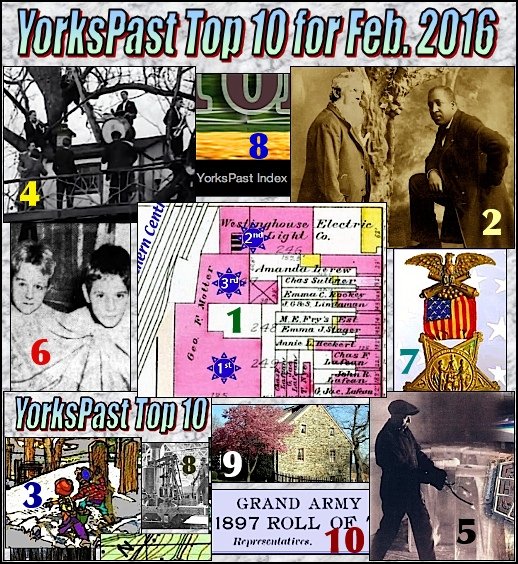 These are your favorites during February 2016:

1—War of the Currents hits York.  This is Part 4 of an industrial chronicle of the buildings on the property recently purchased by the York County Heritage Trust, with their goal of renovating the buildings into a York County History Center. Nationally, the War of the Currents plays out with the company started by Thomas Edison, who favored direct current and was adamantly opposed to alternating current, being transformed, through the financing of J. P. Morgan, into the champion of alternating current. Locally in York something similar happened in 1894. The Westinghouse Electric Light, Heat and Power Co. of York, PA, located in the high bay part of the present Agricultural and Industrial Museum, was absorbed by the much better financed Edison Electric Light Company of York, PA; located in one of the buildings that will become the York County History Center.

2—York Hosts son of John Brown from Harper’s Ferry fame.  Post includes an article to go along with 1891 photo of Jason Brown, second oldest son of abolitionist John Brown, and Rev. John H. Hector, initial Post Commander of the David E. Small Post, No. 369, G.A.R., an African American Civil War Veterans post in York, Pennsylvania. The kick-off of their national speaking tour began in the York County Court House, with both of York’s Grand Army of the Republic Posts, No. 369 (African American) and No. 37 (White), attending the meeting in a body and dressed in full uniform.

4—Two British Films of the Hellam Love Nest.  Post contains links to 1928 and 1930 British films of the Love Nest; a honeymooner tree house perched over Kreutz Creek in Hellam Township, York County, PA. Katina Snyder of the Kreutz Creek Valley Preservation Society graciously provided YouTube links to two short films that British PATHE shot at the Love Nest. One of their members, Jeff Clinton, was analyzing the Kreutz Creek Presbyterian newsletters and discovered in the 1927 newsletter a mention was made that the PATHE film company was filming “The Love Nest.” That clue resulted in their Google discovery of the two YouTube videos.

5—Three Free Talks in Next Four Weeks.  One of these free talk was rescheduled, due to snow. My talk York Air Conditioning & Refrigeration; from 1935 to 2005 will now be presented at the West Manchester Township Historical Society on Monday, April 18, 2016, at 7:00 p.m. The meeting is in the West Manchester Township Building, 380 East Berlin Road (Doors open at 6:45 p.m.)

6—Boys Plunge through Thin Ice.  Seventy-seven years ago York experienced a daring rescue of boys who had plunged through thawing ice on the Codorus Creek. The boys broke through the ice next to the Racquet Club on South Richland Avenue. Betty Wiley pointed out this 1939 news article and also had questions about Highlandtown School and Bon Ton Potato Chip factories in the area.

7—African American Civil War Veterans organize in York.  The Grand Army of the Republic became the most successful of the various veteran organizations, which formed following for Civil War. This post served as a notice for my York Civil War Roundtable presentation; examining of a unique African American G.A.R. Post; the David E. Small Post, No. 369, from York, Pennsylvania.

8—Reading the HEADLINES: An Index to ALL YorksPast posts.  This link is on the YorkBlog menu bar and at the end of every post; providing a linked quick view of all the YorksPast Headlines. I continually get complimented on this feature; one reader summed it up, “It’s just like reading the headlines on various pages or sections of the newspaper.” She liked using my listing of headlines sorted into broad categories; especially the ability to virtually see all headlines in each section, all at one time.

10—Civil War Veterans organize throughout York County.  The Grand Army of the Republic (G.A.R.) became the first nationwide veterans organization in the United States following the Civil War. They were a powerful political force; being responsible for getting May 30th recognized as Decoration Day (now Memorial Day) and in lobbying Congress to establish regular veterans’ pensions. Read about the 13 G.A.R. posts in York County in this post.

This chart tracks the level of my YorksPast readership. Thank you to the multitude of readers that e-mail me with comments, suggestions and finds; you have created a wonderful backlog of subjects for me to post. Your continued feedback is very much appreciated. 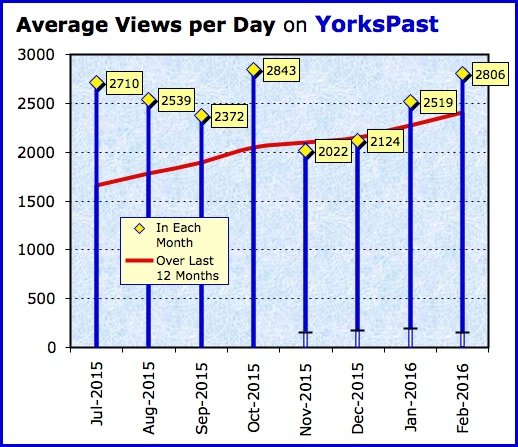