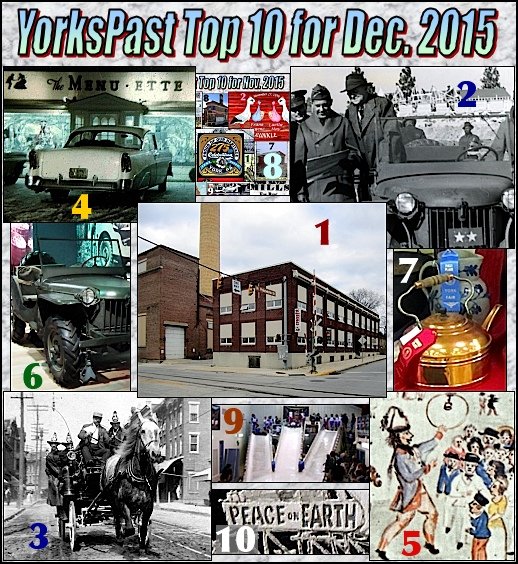 Near the beginning of every month, I’m sharing with my readers the top 10 posts from the previous month. This single graphic, features illustrations from all top 10 posts; however giving greater space to the higher ranked posts. These are your favorites during December 2015:

2—Earliest Jeeps Built 75-Years Ago for WWII. Major General Jacob L. Devers’ Jeep, in the 1941 photo at Fort Bragg, was one of the first 70 Jeeps produced in 1940; 75-years-ago. The photo has two connections to York, Pennsylvania; not only native son Jacob Devers but also a Jeep connection through the York-Hoover Body Corporation, since their Wheatfield Street plant produced the bodies for the initial 70 Jeeps.

3—Exploits of Mack the Noble Fire Horse. “Mack” was the veteran hose carriage horse of the Rescue Fire Company on South George Street in York, PA. For 25 years “Mack” served the Rescue firemen faithfully, for a large part of that time being their only hose carriage horse. “Mack’s” remains are presently interred next to a monument, in his memory, at the York Fire Museum, 757 West Market Street.

4—Menu-Ette linked to York Diner and Playland. The Menu-Ette Restaurant was located approximately across East Market Street from the Modernaire Motel in Springettsbury Township. Bob Sternbergh established this restaurant about in 1960 and operated it for most of the 1960s. The Menu-Ette was not only linked to the York Diner operated by Don Sternbergh, but also to Playland; again via the owners of these establishments. Bob Sternbergh and Don Sternbergh are sons of David Sternbergh, the builder and operator of the Playland Complex along the Lincoln Highway in Springettsbury Township.

5—What is a Fair? I examine early fairs in the Americas based upon two of the Cambridge Academic Content Dictionary definitions. “Fair—a public event, usually held outside, where goods and sometimes farm animals are shown and sold and where there is often food and entertainment.” An example is the early colonial city fair, such as the fair chartered during 1765 and held on the streets around the square in York. “County/State Fair—a county/state fair is one where farm animals and products from that region are shown to compete for prizes and there is food and entertainment.” This type of fair is often called an agricultural fair; such as the York Fair operated by the York County Agricultural Society.

6—York-Hoover Body and the Jeep. The Body Division of York-Hoover Corporation, on Wheatfield Street in York, PA, was repeatedly recognized for their quality and quantity of truck bodies, and similar units, produced for the Army Signal Corps, Quartermaster Corps and the Navy in the military build up and during WWII. The American Bantam Car Company produced the first 70 Jeeps, ever made, during 1940; they all contained York-Hoover bodies.

10—Menu-Ette Christmas Window Artwork. It was a Christmas tradition for Cliff Satterthwaite to decorate the Menu-Ette Restaurant windows with paper murals. Each year there was a different theme. In 1962, pictured artwork, submitted by Cliff, depicted a traditional Christmas. The theme for another year, which stuck out in my mind, was a display featuring a snowball fight and children sledding. Cliff’s artistry, via murals, also graced the interior of this restaurant.

This chart tracks the level of my YorksPast readership. Click on this LINK for a Full View of the illustrations in this post; since the ydr.com site will occasionally cut off important details in the cropping of illustrations. 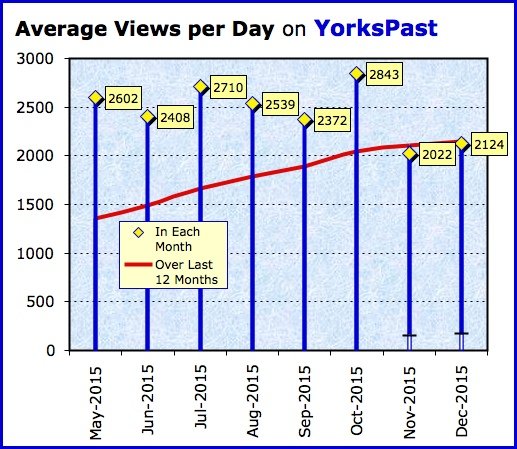