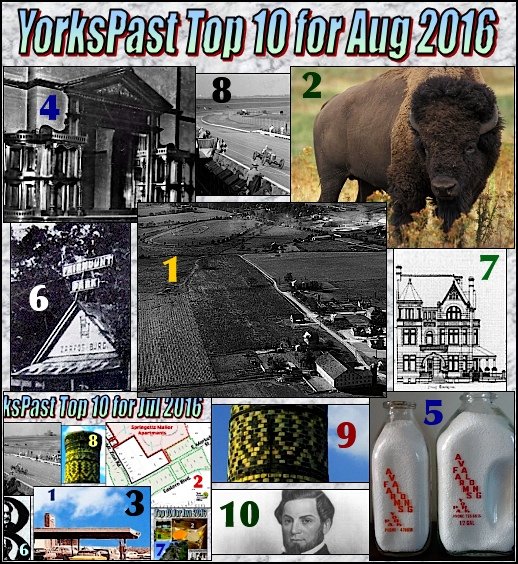 Links to the Top 10 Posts for the ten most recent months:

SYNOPSIS and LINKS to TOP TEN POSTS for AUGUST 2016

1—Mahlon Haines’ Yorkshire Ranch.  Mahlon Haines purchased several properties during October and November of 1924, encompassing 318-adjoining-acres; which became his Yorkshire Ranch. The location of the ranch via marked up historic and present aerial photos serve to orient the reader in viewing a neat photo of the Yorkshire Ranch Barn with Haines Horse Race Track and Playland Pool in the distance. This ranch was developed as the Yorkshire section of Springettsbury Township.

2—Exercising Buffaloes via Airplane in Springettsbury.  During the 1920s, Mahlon Haines utilized an airplane to exercise buffaloes kept in a pasture at his Yorkshire Ranch in Springettsbury Township. These buffaloes were part of a short-lived Government program that provided Bison breeding stock to ranchers willing to abide by certain guidelines.

3—800th Post and Readers Choose Top 10 Posts during July 2016.  Near the beginning of every month, I’m sharing with my readers the top 10 posts from the previous month. These were your favorites during July 2016.

6—Red Lion Fair ran 8 Days in August of 1924.  During 1924 the Red Lion Fair opened on Saturday August 16th in Fairmount Park and ran 8-days; closing the following Saturday. This was the first year that the Red Lion Fair was held both day and night. The fair included the staples: food, games, rides and entertainment. Exhibition buildings held commercial exhibits; while automobiles were exhibited in large canvas tents. In 1924, 55% of the exhibitors were from York, 40% were from Red Lion and the remaining exhibitors were from Dallastown and Yoe.

9—History Center’s Smokestack Twin.  This is Part 11 of an industrial chronicle of the buildings on the property purchased by the York County Heritage Trust, with their goal of renovating the buildings into a York County History Center. In the post 100th Birthday for the History Center Chimney  I wrote about the history of the twin smokestacks; i.e. a 188-feet high smokestack completed in December 1910 and a 182-feet high smokestack completed in July 1916, which still stands. Sam Mills submitted a color zoom-lens photo of the ornamental brickwork believed to be topping the older History Center’s Smokestack twin; i.e. the one built in 1910 and torn down about 1960.

10—Malt, Castings and Turbine-Waterwheels.  William Henry Kurtz [1822-1894] was a York industrialist who manufactured malt, castings and turbine-waterwheels. He had an elaborate downtown mansion built when he was 65-years-old. The Kurtz Mansion stood at 109 West Market Street in York, PA, from 1887 until it was razed in 1946 for a parking lot. The mansion replaced a home on the site originally owned by William Henry Kurtz [1804-1868]; a member of the United States Congress representing York and Adams Counties. William Henry Kurtz [1888-1948] was Executor of the Estate of the last Kurtz owner of the mansion. None of these three William Henry Kurtz’s are father/son, however each W. H. Kurtz was a prominent Yorker; with each deserving a separate post. This post is thus the first of three W. H. Kurtz posts. 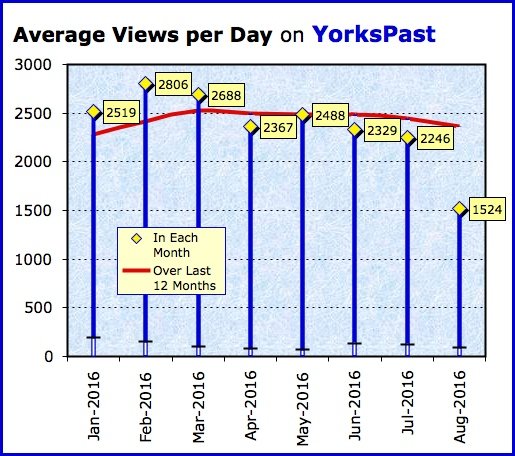