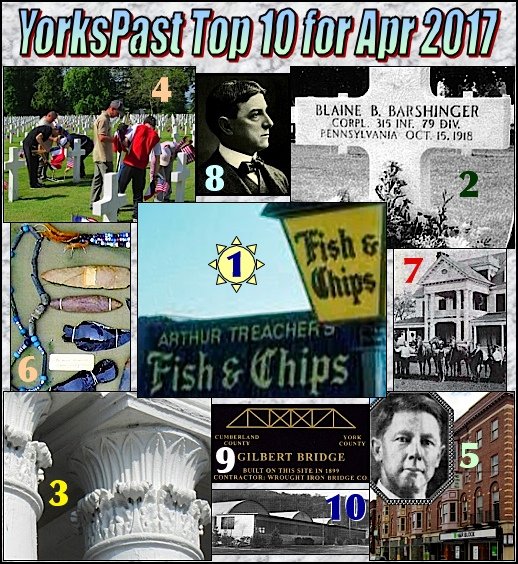 These are your favorites during April 2017:

1—Who remembers Fish & Chips along Memory Lane.  Tammy Roth wrote, “My parents moved from Rhode Island to York County at the start of the Summer of 1975; not wanting to move my younger sibling and me during the school year. Arthur Treacher’s Fish & Chips restaurant opened within days after our move. It became my dad’s favorite. It is where I got my first job, and it is where I first met my husband. I had never heard many facts about the hamburger joint formerly at that location. Thanks for filling in the details with your story about Huntleys Hamburgers.”  Directories at the York County History Center note Arthur Treacher’s Fish & Chips operated at 190 Memory Lane from 1975 until 1981/82. Tammy provides her thoughts why it closed.

2—Local WWI Veterans buried in Europe.  Writing a family history book produces appreciative actions and notes of thanks for connecting distant, and sometimes no so distant, family members. The French gravesite of WWI Veteran Blaine B. Barshinger has received numerous floral decorations by even distant Barshinger relations; these are neat unexpected reactions to his story in my book “Barshingers in America.” Corporal Blaine B. Barshinger served in Company B, 315th United States Infantry, of the famed 79th Division, during World War I. Blaine was wounded in combat on September 27th 1918 and died in France from pneumonia on October 15th 1918, at the age of 25. Blaine is one of 30,086 United States Veterans buried in six WWI American Cemeteries within France.

3—Historic Courthouse Columns built into Meadowbrook Mansion.  A historical note contained within a circa 1986 Meadowbrook Tavern Menu, states: “Of particular note are the six colossal columns on the front porch, which reportedly came from an early York County Courthouse.” Several years ago Jim Rudisill explained the details to me. The six columns on the front porch of Meadowbrook Mansion were repurposed from the cupola of the second York County Courthouse. That courthouse was constructed in 1841 and stood at 28 East Market Street until it was dismantled in 1898 so that the third York County Courthouse could be constructed on the same site. Three years later, prominent York businessman Edwin Myers purchased a summer farm property in Springettsbury Township and immediately retained J. A. Dempwolf trained architects John B. Hamme & Edward Leber to upgrade the house on the property. On August 24, 1901, The York Daily reported construction was about to commence on Myers’ summer residence; the Meadowbrook Mansion.

4—First York County WWI soldier dies in France.  Walter L. Fitzgerald was the first York County WWI soldier to die on foreign soil, doing so on January 5, 1918. Private Fitzgerald is buried in the Oise-Aisne American Cemetery just east of Fere-en-Tardenois in France. Private Fitzgerald was the son of Mr. and Mrs. William D. Fitzgerald of 428 East Prospect Street in York. He was employed as a machinist at the York Safe and Lock Company prior to his enlistment. He served in the United States Air Service, 48th Aero Squadron, Aviation Signal Corps, 2nd Instruction Detachment. He was a member of the First Moravian Church, North Duke Street in York, which held special memorial services in memory of Walter on Sunday January 20, 1918.

5—Mahlon Haines built Haines Building at 101 E. Market St.  Mahlon Haines had shoe stores at six locations within the City of York and three of his stores were within his own buildings; all designed by John A. Dempwolf. Mahlon Haines built the, still standing, Haines Building at 101 East Market Street from Dempwolf drawings dated June 3, 1922. The 101 East Market Street property was recently in the news. The York firm RSDC, formerly Royal Square Development & Construction, is renovating this building on the northeast corner of East Market Street and North Duke Street. RSDC is planning to move its offices to the 101 E. Market St. building and H&R Block will be staying, with 10 new apartments created on the upper floors.

6—Waddy George’s Curioseum in the Accomac Hills.  Bill Neff wrote if I could provide further details about the following message; written on a postcard sent to his grandfather in Virginia and postmarked York, Pa. on June 15, 1937. “The Waddy George Curioseum on the Wizard Ranch is something you gotta see next time you’re up this way.” Waddy’s George’s Curioseum contained over 20000 curious objects and was housed in a museum built by Mahlon Haines on his Wizard Ranch in the Accomac Hills. Waddy was the nickname of longtime York newspaper reporter Wadsworth M. George. In this post, read several newspaper articles describing the museum, the collection, and the fate of Waddy’s George’s Curioseum.

7—Meadowbrook Tavern Menu loaded with neat stuff.  Meadowbrook Tavern menus were always loaded with neat photos and history about the Meadowbrook Mansion; such as a circa 1902 photo of the Edwin B. Myers family standing in front of the mansion with their horses. Restaurant reviews from outside the county, repeatedly asserted Meadowbrook as one of York County’s most admired landmarks. Even today, when shopping at Christmas Tree Hill, which now occupies the mansion at 2840 Whiteford Road, you’ll notice the exterior and most of the interior surroundings remain from the days it was a restaurant, and even before that as a private residence for generations. In this post, also relive sixteen Entrée selections from an 1986 Meadowbrook Tavern menu, with their prices.

9—The tale of Gilbert Bridge over Yellow Breeches Creek.  A York County Archives 1954 photo shows Gilbert Bridge after bridge repairs were made on that Pratt Truss bridge connecting Gilbert Road in York County with Bishop Road in Cumberland County; while bridging the Yellow Breeches Creek. Gilbert Bridge was built in 1899 and was listed on the National Register of Historic Places in 1989, however unfortunately was replaced with a concrete bridge in 2008. A plaque on the concrete bridge pays homage to the historic 1899 bridge that it replaced.

10—US Naval Reserve building in Springettsbury Township.  Thanks to Larry Spangler for sending me a photo of an Eden Road building, utilizing three Quonset huts, with the e-mail subject line: “what’s the story with this building?” Ground was broken on April 28th 1947 for this United States Naval Reserve Training Center in Springettsbury Township. The building utilized three 40 x 100-foot Quonset huts facing Hively [now Eden] Road and connected at the front by a 20 x 148-foot assembly hall made of cinder blocks. The 70-year-old structure still stands today along Eden Road, just north of the intersection with Sand Bank Road. The 15,000-square-foot building remains U. S. Government property, although it has been vacant in recent years. 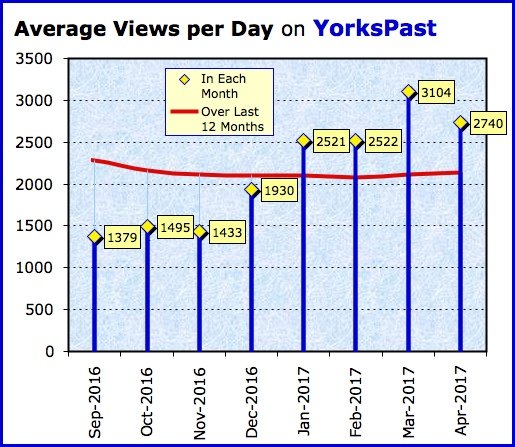 Links to the Top 10 Posts for the 18 most recent months: