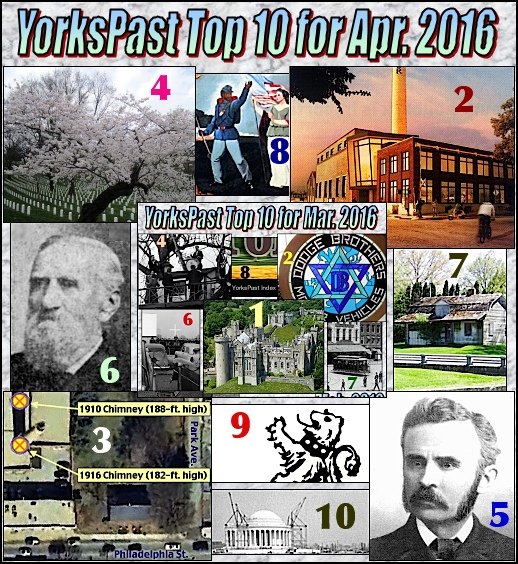 These are your favorites during April 2016:

3—100th Birthday for the History Center Chimney.  This is Part 6 of an industrial chronicle of the buildings on the property recently purchased by the York County Heritage Trust, with their goal of renovating the buildings into a York County History Center. When it came time to build the giant chimneys, for the coal-fired power plant in these buildings, the premier chimney builder in the United States was selected; the Alphons Custodis Chimney Construction Company of New York. The landmark 1916 chimney still stands and celebrates its 100th birthday during July of 2016.

4—DC Cherry Blossoms and Civil War Graves.  I took a break from viewing the blossoming Japanese cherry trees in Washington DC and took a walk across Arlington Memorial Bridge in search of the headstone of a local African American Civil War soldier buried in Arlington National Cemetery. Joseph Edward Lawson was one of the eleven charter members of the David E. Small Post, No. 369, Grand Army of the Republic. This African American G.A.R. post was established in York, Pennsylvania during 1883.

5—Birth of District Steam Heating in York.  This is Part 7 of an industrial chronicle of the buildings on the property recently purchased by the York County Heritage Trust, with their goal of renovating the buildings into a York County History Center. In 1898, Adam F. Geesey was instrumental in the birth of the York Steam Heating Company to make use of exhaust steam; that would have otherwise been wasted at the Edison Electric Light plant. After electric generation ceased in 1959, the York Steam Heating Plant operated until 1977. These buildings housed the first electric generating station in York County. The buildings generated electricity for 75-years and supplied steam, keeping Yorkers warm for 80-years.

7—Campaign Signs on Little Barn Created Problems.  Oversized campaign signs on a little barn, in Springettsbury Township, were judged to be a zoning violation prior to the election primary of 1977. A variance was filed to “legalize” the oversized 6-feet by 12-feet signs on the east and west ends of the barn. In the application, the candidate stated, “The signs will promote public interest in the election of public officials, and spur interest in the American right to participate in elections.”

10—DC Japanese Cherry Tree Intrigue in 1941.  In 2016, the peak bloom of the Washington DC Japanese Cherry Trees was announced for March 25, which was noted as 16 days earlier than the peak bloom during 2015. In walking around the Tidal Basin, one often encounters tour groups with a guide. Every now and then, one overhears a guide with a unique narrative. One such narration dealt with Japanese cherry tree intrigue during 1941. 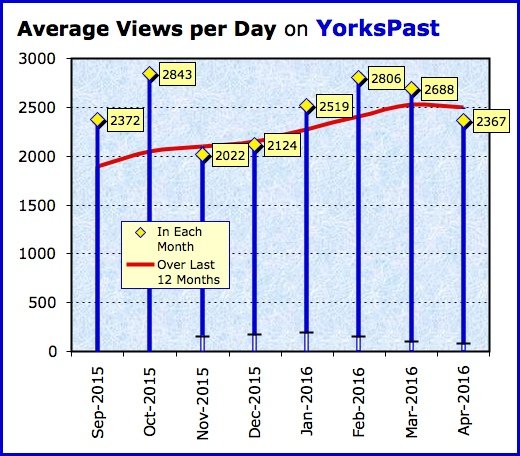