The Northern Central Railway’s Special Schedule, for the Friday April 21, 1865, Lincoln Funeral Train from Baltimore to Harrisburg, lists schedule times for the Pilot Engine; with a footnote indicating the Funeral Train will follow 10-minutes after the Pilot Engine. After I gave a talk in Glen Rock, I got the comment “it would be nice to have a timeline of when the funeral train actually passed by all the Northern Central stations in York County.”

On the Special Schedule, a five-minute stop is noted at Summit No. 1, which is New Freedom; this allowed the funeral train to take on the delegation headed by Pennsylvania Governor Andrew Curtin. New Freedom and York were the only funeral train stops in York County. From Baltimore it was an upgrade to New Freedom; then a downgrade to York. This was followed by an upgrade to Mt. Wolf (Summit No. 2 on the Special Schedule) and then a downgrade to Harrisburg.

York was a scheduled 5-minute stop for the steam locomotive to take on water. However an unscheduled memorial service extended that stop to about 10-minute. The Lincoln Funeral Train pulled into the Pennsylvania Railroad Station in Harrisburg at 8:35 p.m.; 15-minutes past the scheduled time.

Based upon the above information and mileages from Railroad Time Tables, I calculated an estimated timeline for the Lincoln Funeral Train as it passed by all the Northern Central stations in York County. I also included stations and features from later schedules.

The following timeline spreadsheet was used to calculate the estimated times. The spreadsheet also includes today’s Daylight Saving Time (DST) corresponding to the equivalent time of the day on April 21, 1865. 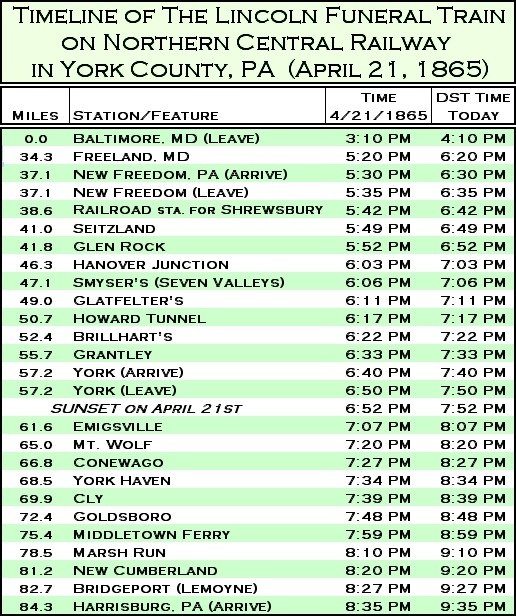