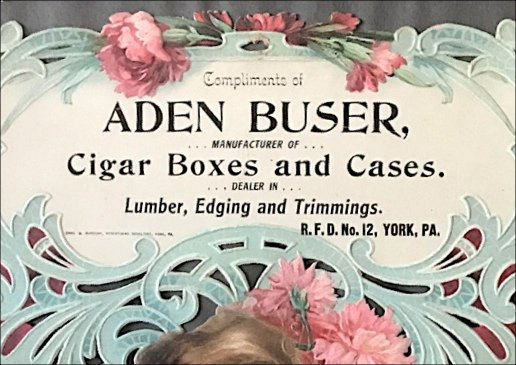 Aden Buser was the supplier of cigar boxes and cases to fourteen cigar makers located in and around Tilden, i.e. Longstown; an unincorporated village which has always straddled three York County townships and presently is the crossroads of four public school districts. Research into one of Aden’s advertising items revealed neat details about Tilden.

An advertising item for Aden Buser’s business was submitted, which was suspected to be located in the York Township sector of Longstown; i.e. within the Dallastown School District. Research confirmed that to be the case; plus digging significantly deeper provided some neat history about Aden, Tilden, Longstown and the printer of the advertising item. York County History Center manuscript and family files, Pennsylvania Factory records, historical newspapers via Newspapers.com, Brethren Church Histories, and U.S. Postal Archives provided the bulk of the source material.

In very small lettering, beneath the word Lumber on the advertising item is “Chas. M. Mundorf, Advertising Novelties, York, Pa.” Charles Myers Mundorf [1862-1930] was a York printer and importer of calendars and advertising items. His place of business was initially located at several locations on South Pine Street in York. In 1909, he had a two-story print shop constructed behind his residence at 822 South George Street; where his business was located for the rest of his life. Charles advertised nationally, the following ad appeared in “Printers’ Ink,” a National Trade Journal for Advertisers. With that ad, Aden was beginning to line up sales, a year in advance, for 1906 calendars.

Aden Buser [1854-1918] was born in York Township, the son of Jacob and Deborah (Fitz) Buser. His father was a carpenter and initially Aden also took up that trade. In 1876, Aden married Priscilla Ann Lefever; they had eight children. In 1879 they located to the village of Longstown, in York Township; where Aden established a cigar box manufacturing business in the basement of their home. In 1880, Aden hired John S. Flory as his first employee; who remained with his business for over 25-years.

Rural villages wondered why are the city and borough folks getting mail delivered to their door for the cost of a stamp, while they were not. Through the remainder of the 1800s, the initial solution, to appease the rural folks, was to allow many rural post offices to dot the landscape; so rural folks did not have to travel as far to pick up their mail. A post office, established in the village of Longstown on December 14, 1886, was one such local U. S. Post Office.

A rule that the U. S. Post Office established for all these new rural post offices was not to duplicate names within a state. New Berlin Borough in Union County, PA, was originally called Longstown; which locals continued to utilize into the 1900s. As such, the Longstown residents in York County had to select a different name. They selected the name of their local church, Tilden, as the name of their U. S. Post Office.

The Tilden U. S. Post Office, in Longstown, existed until November 30, 1903, when it was replaced by Rural Free Delivery (RFD); which delivered mail via rural route 12, out of the York U. S. Post Office. Where, much like today, mail carriers traveled a route to deliver mail to, and pick it up from, roadside mailboxes.

Following 1903, Longstown and Tilden were often used interchangeably as the name of the community; however the Tilden name gradually faded, until seldom used by the mid-1900s. The address, on the Advertising Item for Aden Buser’s business, is “R.F.D. No. 12, York, Pa.”; therefore the item can be dated to sometime after 1903.

The Aden Buser cigar box business, which operated from 1879 until 1914, expanded into a two-story frame 28-ft. x 28-ft. store and factory building with an average workforce of ten, throughout its final 25-years. The Factory Inspection Reports of 1899 indicated Aden Buser’s Cigar Box Factory employed 3-male and 6-female workers, that year.

Links to a few other Longstown posts include: