A southward view photo shows Three Mile Run waterway crossing under East Market Street, Northern Way and Eastern Boulevard in Springettsbury Township. This waterway was so named because the distance from this York and Wrightsville Turnpike crossing point to the square in York is 3-miles.

The stream likely took on such a name due to the neighboring inn along the York and Wrightsville Turnpike; the Three Mile House. In the early Twentieth Century, that establishment was renamed Ye Olde Valley Inn, whereas the waterway continued to be identified as Three Mile Run.

In 1969, Three Mile Run was placed completely underground between East Market Street and Eastern Boulevard, so as to construct Northern Way between these roads.

When the York Mall opened in the Fall of 1968, not all of the surrounding roadway infrastructure had been completed to alleviate the increased traffic on East Market Street. Industrial Highway was completed in 1969, connecting the northern end of the York Mall with Memory Lane. Also the lane running south off of East Market Street, which had previously served as the entrance to Haines Park, was slated for widening to provide better traffic flow to Eastern Boulevard; this would become Northern Way.

The problem with constructing Northern Way; Three Mile Run was located alongside the Haines Park lane in a deep ditch. The solution was to place a section of Three Mile Run underground. The following photo appeared in the August 22, 1969 issue of The Gazette and Daily; quoting from the caption:

STREAM GOING UNDERGROUND—Shown is construction work to put part of Three Mile Run between Eastern Boulevard and the 2700 block of East Market Street underground. The project is being built for Springettsbury Township at a cost of $62,501 by a contractor from Haddonfield, N.J., William Landenslager. Workmen are shown assembling arch plate pipe about 100 yards south of the new traffic light at the southwest corner of York Mall. 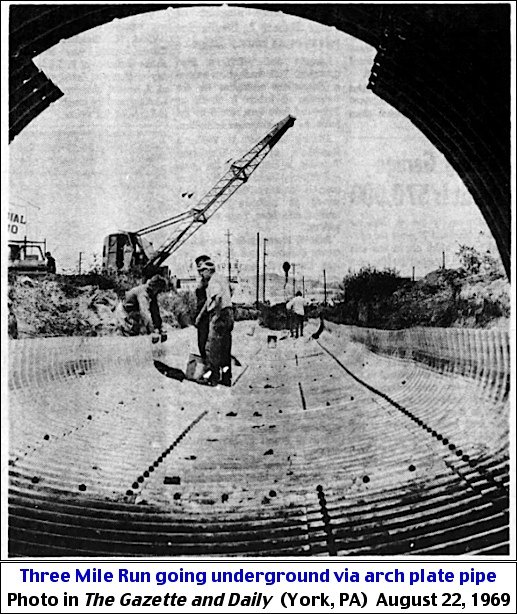 When Best Products built at 2840 Eastern Boulevard during 1977, the section of Three Mile Run placed underground was extended and presently covers three-tenths of a mile. The Best Products building now houses AAA of Southern Pennsylvania.

I’ve marked up the following 1954 Topographic Map section to show the location of Three Mile Run and the drainage area (shaded in blue) feeding its headwaters. The drainage area covers much of Mahlon Haines’ 318-acre Yorkshire Ranch. Three Mile Run ran along the backstretch of the Track at Haines Park and then along the west side of the entrance lane off of East Market Street.

At the middle left is where Mahlon Haines’ 199-acre Haines Acres Farm existed. That farm was not developed until Haines sold the property to Epstein & Sons in November 1953. The development, Haines Acres, had its first buildings constructed in the spring of 1954; these first few homes are shown built along Cambridge Road and Erlen Drive.

I’ve pointed out where Ye Olde Valley Inn was located along East Market Street. An article in the May 29, 1916, issue of The York Daily, points to 1916 as the approximate time frame when the Ye Olde Valley Inn name came into existence; quoting from the article.

A party of young people held a hike to “Ye Olde Valley Inn,” three miles east of York, formerly the Three-Mile House, last Saturday evening. About 10 o’clock, a chicken and waffle dinner was served by the proprietor, William Ball. During the evening a dance was held in the ball room, music for which was furnished by a talking machine. Before departing the participants were served with refreshments, leaving on the last car from Wrightsville for this city.

The car mentioned was the trolley running between York and Wrightsville from 1904 to 1933. In front of the inn, the trolley ran on tracks along the south side of the York and Wrightsville Turnpike. This roadway had been designated the Lincoln Highway in 1913, although it remained a toll road until the turnpike was purchased by the State in 1918. A toll gate was located on the north side of the turnpike between Three Mile House (Ye Olde Valley Inn) and Three Mile Run.