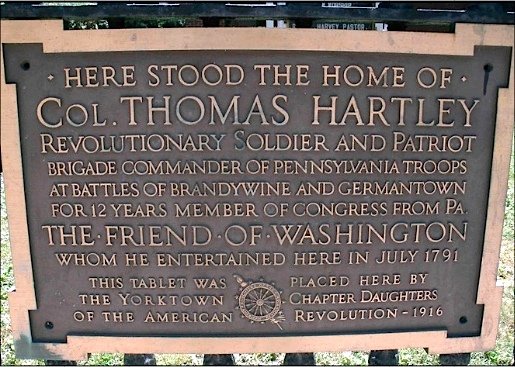 The plaque on the fence fronting Trinity United Church of Christ, at 32 West Market Street, York, PA. “Here stood the home of Col. Thomas Hartley, Revolutionary Soldier and Patriot; Brigade Commander of Pennsylvania Troops at Battles of Brandywine and Germantown; For 12 years Member of Congress from PA. The Friend of Washington, whom he entertained here in July 1791.”
Posted by Stephen H. SmithOctober 28, 2019June 19, 2020 All Posts, Buildings, Businesses, Maps, Pennsylvania, Various Locations, York County

Henry David Lee was nearly the last tenant of the house of Revolutionary War Colonel Thomas Hartley before it was demolished in April of 1876. H. D. Lee & Co. was headquartered in the Hartley house in the early 1870s.

Before I provide details on the H. D. Lee & Co. connection with the house of Col. Thomas Hartley, I’ll address an e-mail from Bill Lee, concerning my post of yesterday; Lee Jeans founder has a York connection. Quoting his e-mail: “You ought to check Wikipedia information on Henry David Lee. There is NOTHING related to an H. D. Lee & Co. in York, Pennsylvania. Henry moved from Galion, Ohio, to Salina, Kansas, in 1889 and set up the H.D. Lee Mercantile Company, the inventors of Lee Jeans. Having the same LEE initials does not a match make!”

Wikipedia is a good starting point in historical research, however that site only provides an overview. The Historian for the Lee Jeans Company made the query to the York County History Center regarding the business, H. D. Lee & Co.; which Henry David Lee [1849-1928] operated in York, PA, during the early 1870s.

Quoting from the entry for Henry D. Lee of Galion, Crawford County, Ohio within “A Biographical Cyclopedia of Distinguished Men, with an Historical Sketch, of the State of Ohio” by J. Fletcher Brennan in 1879; page 359:

“About this time (1870) he became interested in a knitting machine which Franz & Pope, of Bucyrus, proposed to manufacture. Believing it possessed merit, and that it could be profitably introduced, he secured the general agency for five States. Locating his head office at York, Pennsylvania, with a branch office at Galion, he began the work of introducing the machine to the general public, and establishing agencies at various centers.”

Continuing from my post of yesterday. I studied building locations, stated as number of doors, east or west, of the Post Office combined with early house number addresses via the earliest Sanborn Fire Insurance Map of the area; which is March of 1887. From that study I was 95% certain H. D. Lee & Co. was headquartered in the former Hartley house in the early 1870s.

This present view shows where the Col. Thomas Hartley house stood in York until 1876. The plaque on the fence, fronting Trinity United Church of Christ, at 32 West Market Street, states: “Here stood the home of Col. Thomas Hartley, Revolutionary Soldier and Patriot; Brigade Commander of Pennsylvania Troops at Battles of Brandywine and Germantown; For 12 years Member of Congress from PA. The Friend of Washington, whom he entertained here in July 1791.”

Going back into Newspapers.com, with some other search sequences, allowed me to discover articles, which raises the certainty to 100%; that H. D. Lee & Co. was headquartered in the former Col. Thomas Hartley house in York, PA.

The following ad, made to look like an article, appeared in the October 10, 1871 issues of both The York Daily (page 1) and The York Gazette (page 2); two of the newspapers in York, PA. Quoting the whole article:

“IMPORTANT—Family Knitting machines have attracted the attention of housekeepers for years. Some have been offered to the public, but never have they been successfully introduced, not because persons could not see the benefit of such a machine, but those which were offered were not exactly what was wanted in that line, that is there were too many imperfections about those which were within a reasonable price, and those which apparently answered the purpose were too costly for family use, but a new invention in this line has come before the public which is attracting universal attention.”

“It is Franz & Pope’s Family Knitting Machine. One of these Machines was on exhibition at the (York) Fair last week and was appreciated by all who examined its advantages, and it drew the first premium, over the Lamb Knitting Machine, which was in competition. No Machine in the market does the variety of work that this does. A sock knit, heel and toe complete, without taking it off the hooks, in seven minutes, with less hand-finishing than is required by any other machine!”

“Makes any size and quality of hosiery; knits goods of any material whether woolen, cotton, linen, or mized, and of any shape and style; narrows, widens; makes fancy work with much greater facility than other machines; and sets up a finished top for stocking or other work! Simple, durable and cheap, and without any of the complex construction of parts which would render it eternally liable to ‘get out of order,’—that standing annoyance of other inventions of this kind.”

“One of the greatest advantages of this invention is that the same knits all the above named articles. Messrs. H. D. Lee & Co., who are the general agents for this valuable machine, have established an office at York, in the old Franklin House, in front of the Trinity Reformed church, near the post office, where they have those machines on exhibition, and also a large variety of work which was done on them.”

“While the above named firm offer these machines for sale, their principal object is to establish agencies all through the country. This will be a fine opportunity for any person desiring to engage into a good paying business. They can secure county or township rights. Call and examine this very useful machine.”

“Mr. J. Reisinger will be in charge of the office at York. He is a gentleman of experience in the business, and is ready at all times to give every information concerning the machine, and is empowered to attend to all business in connection with this office.”

A 1903 publication of the York County Historical Society contained the text of a lecture delivered before the society on Thursday May 21, 1903, by John C. Jordan; entitled “York in its Relation to the Revolution.” That lecture contained the following: “The house in which Colonel Hartley lived was the most expensively constructed private residence in York. It stood on the site now occupied by Trinity Reformed Church, and for many years was known as the Franklin House.”

No deeds associated with H. D. Lee, or J. Reisinger, were discovered in York. Therefore in all likelihood H. D. Lee & Co. was renting space in the house from 1871 until 1874. It does appear the church acquired ownership of the house many years prior to it being demolished, and was leasing it out until the decision was made in 1876 to tear it down.

The following map section focuses on the area around the Square in York. This is from Beach Nichols 1876 Atlas of York County, PA. Details for these maps were collected a year or two prior to publication date, therefore the ‘Franklin House’ can still be pointed out in front of Trinity (1st) Reformed Church.

Demolition of the Franklin House in April of 1876

The York Gazette of March 7, 1876 reported on the pending demolition; quoting that article: “The old Franklin House, which stands in front of the Trinity Reformed Church, will be removed, causing the handsome church edifice to be seen entire from the street. The house is an old land mark. The wood work upon the inside is fancifully wrought, having been carved by hand, and is said to have been done by British prisoners during the Revolution.” I wonder if these prisoners were part of the work release prisoners from Camp Security; located three miles to the east.

The York Daily of April 5, 1876 reported the demolition has commenced; quoting that article: “The old building in front of the Trinity Reformed church, known as the ‘Franklin House,’ has been vacated by its tenants and the tearing away of the building has commenced. This was one of the oldest buildings in the borough and has quite a history connected with it.”

Both Lewis Miller and William Wagner drew the Col. Hartley house during the early 1800s. I wonder if any photos were taken of the house prior to demolition? Additional research about the Col. Thomas Hartley house, i.e. the ‘Franklin House,’ will be included in an upcoming post.