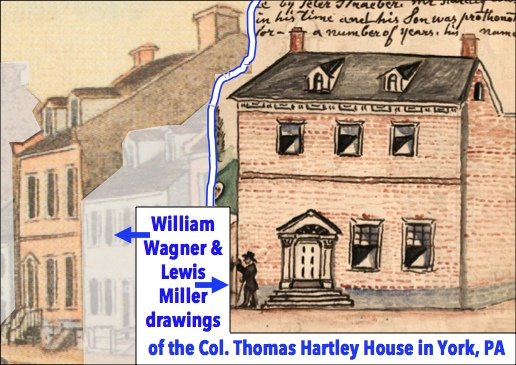 William Wagner and Lewis Miller produced the only known drawings of the impressive house of Colonel Thomas Hartley; a Revolutionary War Soldier and Patriot that entertained President George Washington at his home on July 2nd, 1791.

The 1800s drawings are remarkably similar, however the Wagner drawing is likely better proportionally, while the Miller drawing has the better details. I wonder if any photos were taken of the house prior to demolition in 1876?

The Col. Thomas Hartley house stood at 32 West Market Street, fronting Trinity United Church of Christ. A plaque at that site states: “Here stood the home of Col. Thomas Hartley, Revolutionary Soldier and Patriot; Brigade Commander of Pennsylvania Troops at Battles of Brandywine and Germantown; For 12 years Member of Congress from PA. The Friend of Washington, whom he entertained here in July 1791.”

I initially utilized the York County History Center publication, “Views in the Borough of York & Vicinity” which featured 1830 drawings by William Wagner. Plate 5 is Wagner’s drawing of the south side of Main Street (West Market Street), east of Beaver Street. The Col. Hartley house identification was made by comparing the drawing to a March 1887 Sanborn Fire Insurance Map of the same area. Per the 1887 Map, note that prior to the 1890s street renumbering in the City of York, the address of the Col. Thomas Hartley House was 18 West Market (Main) Street.

The York Gazette of March 7, 1876 reported on the pending demolition of the Col. Hartley house; quoting that article: “The house is an old land mark. The wood work upon the inside is fancifully wrought, having been carved by hand, and is said to have been done by British prisoners during the Revolution.” I wonder if these prisoners were part of the work release prisoners from Camp Security; located three miles to the east.

The Lewis Miller drawing of the Col. Thomas Hartley house is part of the York County History Center’s large collection of his work. I initially recalled a copy appearing on page 101 of “Nine Months in York Town” by James McClure.

The York County History Center provided a copy of the original Lewis Miller sketch of Col. Thomas Hartley house. This sketch was done well after the 1830 William Wagner drawing; possibly around the time the building was demolished in 1876. The church had already purchased the building (as seen on the Wagner drawing) immediately to the east of the Col. Hartley house, demolished it, and Lewis Miller shows some individuals had already been buried in that expanded churchyard.