Story of the Susquehanna Trail in the Good Roads Movement: Part 3

In Part 1 of the Story of the Susquehanna Trail in the Good Roads Movement, I asked my readers to solve the mystery location of a Susquehanna Trail road sign in York County by identifying the full name of the intersecting road.  Nobody commented with the correct answer following the Manchester Township clue, therefore here is your next clue: the sign is at a “Y” intersection.

In Part 1, I noted that the 1925 Official National Survey Maps and Guide for Pennsylvania listed the principal named highways in Pennsylvania and their State Route numbers.  I summarized the history of State Routes 1 to 4 in greater detail, since I’m looking at the beginnings of the Susquehanna Trail:

Two of the early, prominent Pennsylvania highways converge at tiny Amity Hall.  In traveling back home from Penn State Football games with my Dad, Harold Smith, every now and then, he’d have a comment or two about the Amity Hall gas station upon seeing the Amity Hall sign along Route 322. 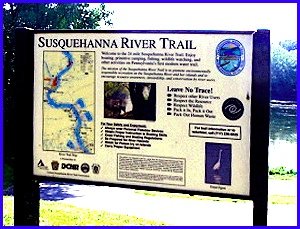 During the 1930s, Dad worked as a truck driver, primarily during late fall and winter, when he was on furlough from the Pennsylvania Railroad.    Amity Hall was always a stop, to get gas and grab a bite to eat at the inn, when he hauled into north central Pennsylvania or New York State.  I regret not taking the Amity Hall exit one of those times, when Dad was alive, although a few years ago, I did just that.  I did not see the gas station as I drove past the ruins of the inn, however I did discover some nice scenery in the vicinity.

While reading the Susquehanna River Trail signage, I questioned a nearby older cyclist if he knew where the old Amity Hall gas station stood.  He offered to show me the location and filled me in on some of the local history and lore. 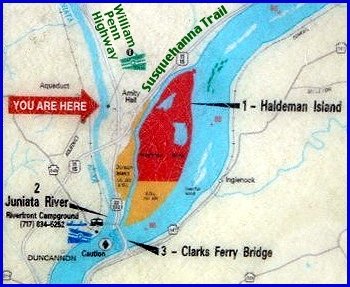 The following is a 2014 Bing.com Birds Eye Aerial Photo of Amity Hall; that I’ve annotated with the original locations of the William Penn Highway and the Susquehanna Trail.  If one takes the Amity Hall off ramp when heading to Harrisburg, it leads directly to the original intersection of the William Penn Highway and the Susquehanna Trail.  I’ve noted the location of the former gas station, pictured in the postcard at the beginning of this post.  Vandals started a fire in the shuttered Amity Hall Inn & Motor Lodge in 2009.  Firefighters were able to extinguish the blaze before it entirely consumed the structure.  The 2014 aerial photo shows the ruins still stand.

Following my visit to Amity Hall, I purchased the postcard, shown at the beginning of this post.  I’ve indicated the postcard viewpoint direction in the lower left of the 2014 Bing.com Birds Eye Aerial Photo. 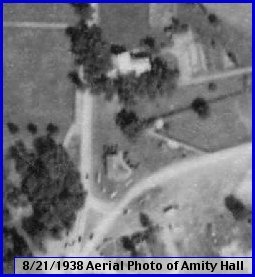 This 1938 Aerial Photo of Amity Hall is from the Penn Pilot web site containing historical aerial photographs of Pennsylvania.  It is orientated with North at the top and is a straight down view; as opposed to the Bing.com angled birds eye aerial view, although still the same northerly direction.  The Susquehanna Trail forks off to the right at Amity Hall.

BELIEVE IT OR NOT – My cyclist guide, during my visit, explained he has talked to people claiming to have witnessed and/or experienced paranormal activity in the vicinity of the Amity Hall Inn & Motor Lodge; both before and after the fire.  He realizes the place is historic however he is convinced the place is haunted; and it is his impression that is really the reason why not much is being done with the ruins.

Further posts in this series will examine the 1918 competition between Adams County and York County as they advocated for the southern extension route of the Susquehanna Trail to pass through their respective territories.