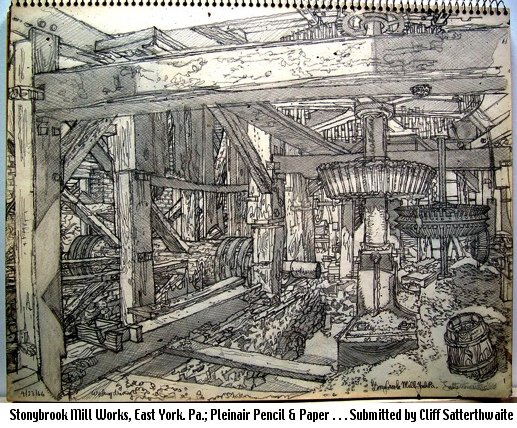 Early in the afternoon on Saturday November 15th, I finished up annotating the aerial photos that appeared in last Monday’s post: 1860 Buildings 51-58 in East Region of Springettsbury Township. Shearer’s 1860 Map of York County indicates the Glatz Grist Mill is located just south of Stony Brook. I noted the Mill Building and the Mill House as buildings e52 and e53, respectively, on the 1937 Aerial Photo from that post, and recalled my exploration of this mill in the mid-1960s; when the locals simply called this old mill, Stonybrook Mill.

Later that afternoon, I attended the show of artwork by Cliff Satterthwaite in the Colonial Court House. One of the first pieces that caught my eye was a painting of metal mill gearing powered by a wooden waterwheel; it definitely captured the essence, the working guts of a mill, while contrasting new and old design practices.

I soon got distracted, talking to other attendees. I purchased Cliff’s book containing many York, Pennsylvania pieces of his artwork and had him sign it. 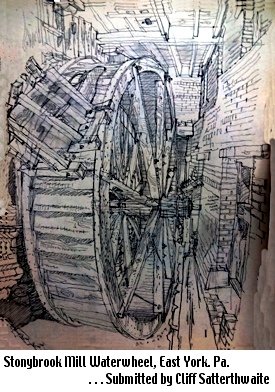 I took my time, looking over all of Cliff’s artwork, displayed within the Colonial Court House, and made the discovery; the drawing that first caught my eye was a painting of the working guts within the Stonybrook Mill. Since that art exhibit, I’ve been corresponding with Cliff about various pieces of his artwork. Cliff Satterthwaite shared with me the pleinair pencil and paper drawings within this post.

When our family moved to the eastern end of Springettsbury Township in 1966, I would occasionally ride my bike to Kinard’s Store; on the southwest corner of Locust Grove Road and Stone Ridge Road in Stony Brook. One time at the store, I pulled in just as two boys were also arriving on their bikes. They asked if I wanted to see a neat mill, just up the road. That was the first time I got to explore the inside of Stonybrook Mill.

Susan Glatz had Andrew and Henry Younker operating her mill in 1860. In most historical accounts, this is identified as Hiestand’s Mill; for long time owners Abraham Hiestand, and followed by William A. Hiestand. The mill was torn down in 1972 to make way for the Wyndamere Townhouse Apartments, off of Locust Grove Road. The mill was located about at the present intersection of Ambleside Drive and Cropthorne Lane within Wyndamere.

The Mills of Stony Brook

There were four mills located in (or near) Stony Brook. Two Grist Mills were powered by water wheels and two mills began as mill warehouses, however these warehouses eventually evolved into steam engine powered mills, or possibly went directly to utilizing electric motors to power the mill shafts, gearing, and mill equipment. Within old newspaper articles, family histories and other books, I’ve seen every one of these mills occasionally referred to as Stony Brook Mill or Stonybrook Mill; in addition to a host of other names. In many cases the name Stonybrook Mill simply means this is a mill in (or near) Stony Brook. If your confused, join the party, because whenever I read a reference to Stony Brook Mill, I have to mentally sort out, to which of the four the writer was referring. Here is a summary:

[1] Hauser’s water powered Grist Mill was located off the beaten path, in a field east of Stonybrook—this was an early water powered mill in the area; on a few instances I’ve seen it called Stony Brook Mill, however no remains of that mill existed after 1920. Grant Voaden reference GV-19.

[2] Hiestand’s water powered Grist Mill (this was Glatz Grist Mill in 1860, Hiestand’s Grist Mill over most of its working life, and simply Stony Brook Mill, to locals, at the end and after its useful life). It was located near the west side of Locust Grove Road; next to where a tributary of Stony Run crosses Locust Grove Road (this is heading south out of Stony Brook and is before reaching Eastern Boulevard). Grant Voaden reference GV-18. This mill stood until 1972. This mill still had a big wooden water wheel (non-working) when I explored it in the mid-1960s. The boys gave me that guided tour, after delivering a package from Kinard’s Store to the house back to the right of the brick mill building. The pencil & paper artwork by Cliff captures the mill gearing and the wooden water wheel in splendid detail. The following are comments by Cliff Satterthwaite, from one of his e-mails about the Stonybrook Mill artwork:

One of my first encounters with the mill was to ask permission to draw it.  The old brick house to the upper right, I figured, was the “mill keepers” home. The miller had passed away leaving the elderly wife and her no fur, eczema dog. She kindly granted my request to draw different views of what seemed to me as “time joyfully standing still!”

She let me “rescue” a small flutter wheel that was part of the gearing process. The wooden hand made nail bucket (in the painting) most likely was tossed out with the demolition of a Treasured Part of History ….. The Stoneybrook Mill!!

I did ask The York Historical Society to investigate and “find ways to rescue it”, but no “practical way” was found.

[3] Waser’s Mill (3755 E. Market Street); also called Stony Brook Mill. I have a 1924 receipt with Stony Brook Mill imprinted at the top and signed by M. F. Waser; the mill proprietor. This mill is located on the north side of East Market Street and is just west of the railroad tracks, where the former concrete bridge once stood. This was a non-water powered mill that produced flour and feed mixes. The mill building presently houses AMEREX, who install replacement windows, vinyl siding and exterior doors.

[4] Hauser’s Mill (3780 E. Market Street) began as a mill warehouse and housed Kreutz Creek Valley Farmers Co-Op after 1918. Among other things, the Co-Op did custom grinding and mixing of feeds, within their non-water powered mill. Again, I’ve seen references to this mill as Stony Brook Mill; although the writers were likely only making reference to this mill being in Stony Brook. This mill building is located next to the well-known Ettline Antiques properties on the south side of East Market Street and is just east of the railroad tracks. The mill building previously housed The Framers & Framers’ Gallery for many years. A new owner of the mill building is retaining existing elements of original construction throughout the structure; details in a future post.

I’ll be adding posts, with more details on each of these four mills, so readers can more clearly distinguish them from one another. For now, here are related links: