The Shoe Wizard celebrates 33 Years as a Yorker

Mahlon Haines, “The Shoe Wizard”, always did things differently; for example he built the Shoe House east of York.  Most people celebrate milestones like 5-Years, 10-Years, 25-Years, etc.  Mahlon Haines considered his 33rd Year as a Yorker as a cause for celebration.

This half-page ad was carried in newspapers throughout York County.  This particular copy is from the Saturday September 17, 1938 issue of The Evening Sun; a Hanover newspaper.  Quoting the ad, starting with the text below the picture of Haines:

In Celebration of Mahlon N. Haines, The Shoe Wizard, Finding York and York Finding HAINES; 33 years ago, both have been benefited.

A full week of festivities given free to all the people of York County by Haines who came to York 33 years ago, single, penniless and alone—The greater number and the more the people enjoy themselves the better Haines will like it.

TUESDAY   It’s on with the Skate Tuesday Night, at White Rose Skating Rink, York.  Children up to 16 skate from 7 to 9 o’clock, and over 16 skate up ‘til midnight.  Free rink, free skates—all on HAINES.

WEDNESDAY   It’s on with the Reception Wednesday Night for business and professional men.  This is your invitation.  All invited.  MAHLON N. HAINES’ Residence, at HAINES Acres, East of York, Pa.

THURSDAY   It’s on with the Dance Thursday night at the Valencia and Alcazar, York, Pa.  Music will be furnished by two York Orchestras—Blue Moon Orchestra at Valencia and Roy Gibbons at Alcazar.  Dancing from 9 to 12.  All free on HAINES.

FRIDAY   It’s on with a Big Time Friday Night for the Colored People at the Armory, N. George Street, Across the Bridge.  Free dancing.  Prizes for Cake Walks, Pie Eating Contests.  Ice Cream and Cake for all.  It’s all Free on HAINES.

It’s for one and all to get Haines money to spend everyday of this founder’s week.  It’s once in a lifetime Free Celebration for the people of York County.  The like has never been heard of before of one man giving such a week of amusements free to all the people.

This ad shows that segregation existed in York during 1938, with the free event on Friday night for the “Colored People.”  I assume that implies that blacks were not welcome at the other events.

Haines Park was along the Lincoln Highway, East of York; it was set back south of present Route 462; East Market Street in Springettsbury Township.  The intersection of Northern Way and Eastern Boulevard would fall within the infield of Haines Park.  The AAA Building and their parking lots are located where the southeast part of Haines Park existed.

Mahlon Haines came to York in 1905 as a 30-year-old striking out on his own.  He borrowed money to go into business, but was bankrupt in two years.  He got a $127 consignment of shoes from D. S. Peterman Company to start anew in the shoe business.

Through hard work and sales gimmicks, Haines turned those 127 dollars into 30 shoe stores by 1922.  He owned 50 shoe stores by 1935.  Mahlon Haines was a self-made millionaire, who took great pride in giving it virtually all back to his employees and to the community.

Continue reading for enlarged sections of the 1938 “Founder’s Week” ad. 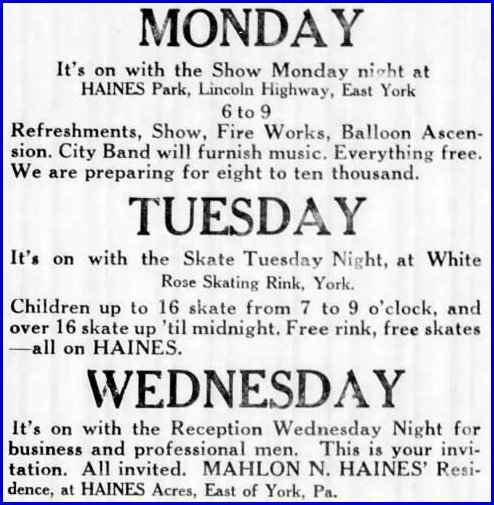 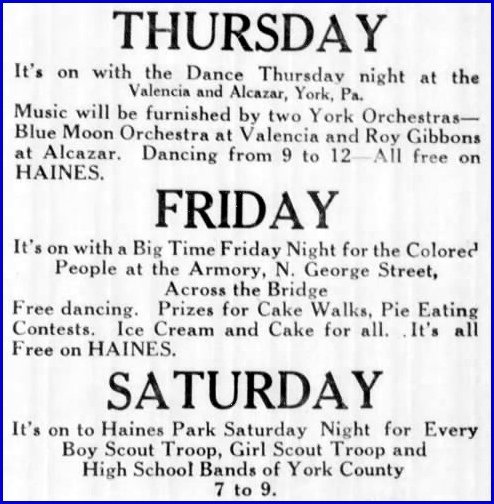