The Shoe House is OPEN

I read that the Haines Shoe House, now selling bakery treats, had opened for the season under new ownership; so I stopped by for a Sunday afternoon snack on my way back from Lancaster County. The parking lot was full. People were taking Shoe House tours, getting cones of Beck’s Ice Cream and purchasing treats from Mellie’s Makery. They also have a gift shop, featuring some neat Shoe House t-shirts.

My chocolate cupcake and hot chocolate were terrific. I got some peanut butter fudge to take home; it did not last long, it was that good melt in your mouth type of fudge. I’ll definitely return. They are closed Monday and Tuesday, but are open every other day of the week, starting at 11 a.m.

I still get the occasional question about the use of Haines Shoe House in my YorksPast title graphic. I’ve used this graphic ever since my first post on July 26, 2012. This Friday will mark my 600th post; writing about local history, now averaging 4.3 times per week.

I caught the local history bug in high school during an assignment to write a report on an influential local personality. I selected Mahlon Haines, the successful shoe salesman and businessman that built the Shoe House, after making a discovery at the Martin Memorial Library.

The report on Mahlon Haines was memorable because of a personal connection.  I saw Mahlon during Cub Scout outings at his Wizard Ranch near Accomac.  However I primarily remembered him as the jovial guy that visited our farm.  My Dad bought a flock of sheep from Mahlon to keep the grass down in the pasture.

In selecting the local personality for my high school report I discovered a half-dozen large scrapbooks at the Martin Memorial Library.  These were scrapbooks put together by Mahlon Haines that covered his life and were donated to the library just before he died; they are now in the Library of the York County Heritage Trust. 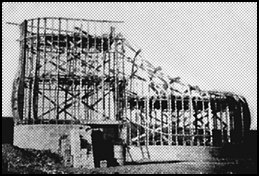 Someone gave me this clipping of the framing out of the Shoe House, which I used in my 1966 report. It distinctly shows the split-levels of the house.

After that high school report, I started to keep a notebook and files of things I did and observed; kind of like Mahlon.  Every year I started a new folder for the current year and dropped items of interest into the appropriate folder.

I attended a motivational lecture during 1977.  The emphasis was on setting life goals and keeping a journal.  The lecture reinforced and expanded what was started in 1966.  I made folders for years prior to 1966 and to fill them, the curiosity in researching local history grew. My growing collection will form the basis for an eventual Autobiography.

My initial family history book was published in 2001.  I included local history interspersed with the family history.  I entered my book “Barshingers in America” in the 2002 National Genealogical Society’s Genealogical Writing Competition.  One top award is given annually in three categories.  I was told that “Barshingers in America” won the Genealogy and Family History category in large part because of the quality and extent of related history included with well-researched and documented genealogy.

I have continued researching local history to enhance other family histories, to develop talks on various aspects of local history and to lay the groundwork for historical novels of which my Railcar Gold series of YorksPast posts is the first of these novels.

My fervor for local history began with that report on Mahlon Haines, so why not have the Shoe House in the YorksPast title graphic. I’ve always liked the following photograph, in the Library of Congress Collection, of Mahlon Haines in leaded glass within the doorway of his Shoe House. 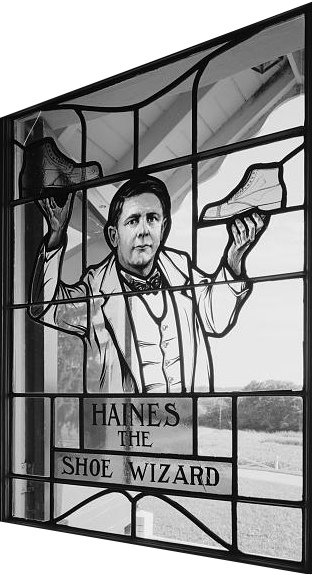