The Road to JOPPA; origins of Susquehanna Trail in Southern York County

Story of the Susquehanna Trail in the Good Roads Movement: Part 12

Early origins of the Susquehanna Trail in southern York County can be traced back to the road between YorkTown, Pennsylvania and Joppa, Maryland. A reader of last week’s post: Susquehanna Trail extends from York to the Maryland line, asked to see the whole York to Joppa route through York County and Maryland.

I found early road maps for Pennsylvania (1822 by John Melish) and Maryland (1794 by Dennis Griffith) in the Library of Congress digital collections. In the following, I’ve enlarged both to the same scale and highlighted, in yellow, the Joppa Road from York, PA to Joppa, MD: 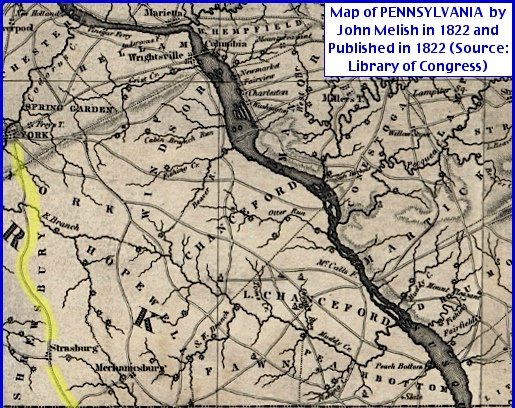 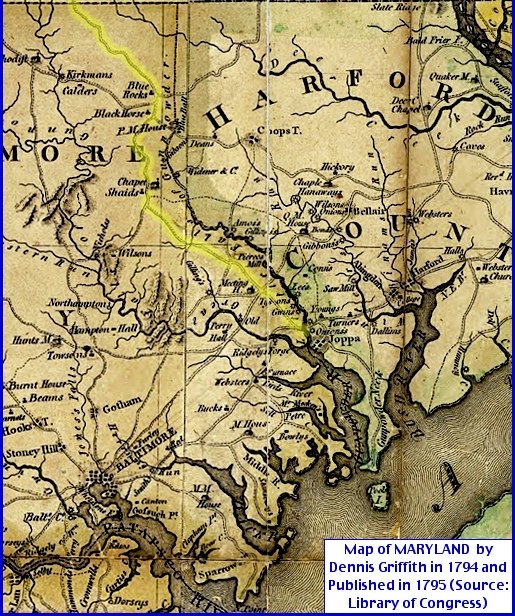 In early colonial times, Joppa, Maryland, was a thriving port and major tobacco export town on the Gunpowder River. The town had deep harbor access to the Chesapeake Bay. Ships from Europe and the West Indies routinely stopped at the Joppa wharfs. Joppa became the county seat of Baltimore County, Maryland in 1712; which was 17 years before the town of Baltimore was ever established.

Recall that YorkTown, Pennsylvania, was established in 1741 and became the county seat when York County was separated from Lancaster County in 1749. A rudimentary road existed between York and Joppa; after all, they were county seats in neighboring counties and Joppa was YorkTown’s closest port. Petitions to improve the Joppa Road appear within York County Courts in 1752 and improvements were approved in 1754.

Joppa was established in 1706 for the purpose of becoming the new county seat. The Provincial Assembly of Maryland chartered the new town at the location of a mile-wide, deep-water harbor on the Gunpowder River. In 1707, streets were laid out and buildings were built before the British monarch vetoed further work on the town. In 1712, the veto was lifted and Joppa became the county seat. Maryland historian Herbert Baxter Adams, wrote in his 1885 book “Maryland’s Influence Upon Land Cessions To The United States:”

For many years Joppa reigned the mistress of the Chesapeake bay. Within its borders were the county court-house, the chapel, the county prison, several inns and a number of commodious warehouses and stately mansions. In its harbor were vessels from New England, the West Indies, and ports of Europe. It became the seat of the social and civil life of the county and of the adjoining hundreds and parishes, and being located upon the public highway leading to the Northern colonies, it became a well-known resort for travelers and merchants.

In 1768, the young port town of Baltimore replaced Joppa as the county seat of Baltimore County. By the late 1700s, Joppa harbor had filled with silt, closing the port. Then the town of Joppa suffered a major smallpox epidemic that decimated the population.

Both of these factors turned this former county seat into a ghost town by the early 1800s. Again quoting Maryland historian Herbert Baxter Adams, from his 1885 book “Maryland’s Influence Upon Land Cessions To The United States:”

Joppa had passed into the list of “deserted” towns and has since become so desolate as to make its site almost an enigma. Baltimore County has many “Joppa roads” traversing it, but it is only lately that the convergent point of these roads has been ascertained. The destruction of the town has been complete. Its warehouses have rotted away, its wharves have disappeared, its harbor has become filled with alluvial deposits, its streets have been turned into ploughed fields.

Today only the nearby Rumsey House, built circa 1720 (private residence), remains; although the foundations of many of the town site buildings from Joppa’s boom times are still likely buried in the ground under thick layers of silt that has since accumulated at the mouth of the Gunpowder River.

In 1961, the ploughed fields of the old Joppa town site were being developed as a planned community called Joppatowne. The last remaining building, the Rumsey House and its grounds, was slated to become the site of the community swim and tennis club.

Preservation efforts were stalled until First Lady Jacqueline Kennedy intervened. She was able to convince the developer to relocate the community swim and tennis club. Today, the restored Rumsey House stands as a private home. Much of the remaining ground of the town, not yet under the silt and muck of the Gunpowder River, and not yet developed, was ceded to the Episcopal Church, as custodian.

In 1970, the Episcopal Church re-consecrated the grounds and built the Church of the Resurrection adjacent to the foundation of Joppa’s original “St. John’s Parish.” At that time, ruins of the original wharf and docks, as well as the town jail, were still visible until Hurricane Agnes swept through in 1972. The Old Joppa Site was added to the National Register of Historic Places in 1979. 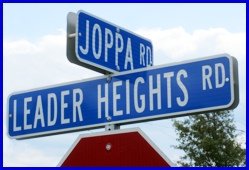 Within York County, some stand-alone segments of the early colonial Joppa Road between York, PA and Joppa, MD still exist because they did not become part of the York & Maryland Line Turnpike; chartered in 1807 and completed in 1810. Joppa Road that crosses Leader Heights Road is likely part of the original or 1754 improved Joppa Road.

In a comment to last weeks post, reader Eric Lowe provided directions to a trail around Lake Redman that is likely a segment of the original dirt Joppa Road. Eric stated his reasoning:

The sort of wide dirt road was old Joppa Road. When you reach the crest of the hill and look toward Leader Height’s Road you can visualize the old alignment between there and where Joppa Road bisects Leader Heights road.