George B. Hoffman, of York, PA; was among those Killed in Action

“The President Lincoln Torpedoed on Return Trip” is the headline to this photo appearing on page 1 of the June 4, 1918 issue of the York Daily.  The photo caption states:

The President Lincoln, an 18,500 ton vessel, formerly was a Hamburg-American transatlantic steamship plying between Europe and New York and was taken over by the government at the declaration of war.  It was torpedoed last Friday while returning from Europe to the United States.  Among the 26 enlisted men of the Navy on board reported missing was George B. Hoffman, of this city.

One-Hundred Years Ago, on July 28, 1914, the assassination of the Austrian Archduke Ferdinand ignited World War I.  United States President Wilson pledged neutrality as the war spread across Europe.  It was German’s sinking of the occasional neutral merchant ship that grew into an onslaught against U.S. merchant ships by early 1917 that resulted in the United States declaring war on April 6, 1917.

This is the first post in a series, over the next few years, looking at local World War I servicemen Killed in Action.  The June 4, 1918 issue of the York Daily contained the following article on George B. Hoffman:

A telegram was received last evening announcing that among the missing from the United States President Lincoln, which was torpedoed by a hostile U-boat last Friday, was George B. Hoffman, of this city.  Hoffman enlisted June 18, 1917, at the local recruiting office, at the age of 17 years.  He was sent to Newport, R. I., where he received his preliminary training.  Later he was transferred to the Brooklyn navy yard.  In December last, he was assigned to the ill-fated boat President Lincoln, as an ordinary seaman.  He was returning from his fourth trip when his boat was sunk.

At the time of his enlistment he was employed at the plant of the American Chain Company, and lived with his stepbrother, Albert.  His father and stepmother, Mr. And Mrs. Michael B. Hoffman, were formerly of this city and now reside at Ridley Park, Delaware County.  A sister, Mrs. Melissa Matchet, of Harrisburg, and a sister Miss Naomi Hoffman and a brother Charles Hoffman, reside at Ridley Park.  He also has three stepbrothers, Jacob Billet, living at Ridley Park; Luther Billet, Norristown, Montgomery County, and Albert H. Billet, 572 West Philadelphia Street, this city.  He is a member of the Bible Class of the West Street Methodist Church, of which I. N. Pickes is the teacher.

Three officers and twenty-three enlisted men of the Navy, were reported missing yesterday from the torpedoed American transport President Lincoln.  One officer was captured by the submarine. 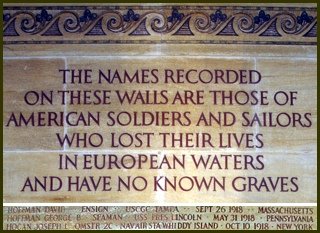 George B. Hoffman is memorialized on the Tablets of the Missing in Brookwood American Military Cemetery in Woking Borough, Surrey, England.  Images are from the American Battle Monuments Commission.

George B. Hoffman, Seaman, is also memorialized in York, PA, on the Columns of the York County Government Center (the former York County Court House) on East Market Street and at the Veterans Memorial Gold Star Healing and Peace Garden.

This history and photo of the U. S. S. President Lincoln are from the Department of the Navy, Naval Historical Center, Washington, D.C.:

S.S. President Lincoln, a 18,168 gross ton passenger liner, was built in 1907 at Belfast, Ireland, for commercial operation by the Hamburg-American Line.  A rather distinctive ship, with six masts, a split superstructure and relatively large cargo capacity, she was mainly intended for the westbound immigrant trade.  Trapped in American waters when World War I began early in August 1914, she was laid up in New York Harbor until seized when the United States entered the conflict in April 1917.  She was subsequently turned over to the Navy for conversion to a transport and was placed in commission in July 1917 as USS President Lincoln (with no registry ID # assigned).

Repairs and outfitting kept her in port for some time before President Lincoln took her first troops across the Atlantic in October 1917.  Four more eastbound voyages to France followed during the next six months.  In all, she transported about 23,000 American military personnel to the European war zone.  On 29 May 1918 President Lincoln left Brest, France, homeward bound on the return leg of her fifth voyage, accompanied by three other troopships [Antigone, Rijndam and Susquehanna].  On the morning of the 31st, while about 600 miles into the trip, she was intercepted and torpedoed by the German submarine U-90.  USS President Lincoln sank soon afterwards, with the loss of 26 of the more than 700 persons on board.

Photos of some of the Officers and Men Lost with the sinking of the U. S. S. President Lincoln on May 31, 1918, are on a web site maintained by the Department of the Navy, Naval Historical Center, Washington, D.C..  George B. Hoffman is not pictured; if someone has a photo of George, please comment, maybe we can get it added to this site.  The explanation of this Naval Historical Center collection follows:

Soon after the end of the First World War, the surviving crew members of USS President Lincoln formed an association that, among other things, tried to perpetuate the ship’s memory by erecting memorial plaques listing the men killed when she was sunk.  [A photo, taken in late 1920s or early 1930s, of the plaque exhibited in the main lobby of the Navy Building, on Constitution Avenue in Washington, D.C., is shown below.]  The President Lincoln Club also collected pictures related to the ship, her men, and her loss.  These, subsequently donated to the Naval Historical Foundation, constitute the bulk of the images contained in the several pages of this presentation.  Among them are photographs of all three officers, and seven of the twenty-three enlisted men, who were lost with the ship.  Most of these photos were presented to the Club by President Lincoln’s former Commanding Officer, Rear Admiral Percy W. Foote. 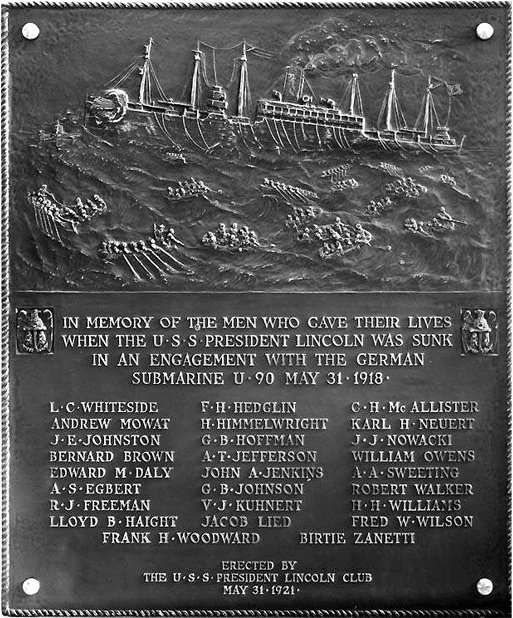