The Weightlifting Hall of Fame sits along I-83 north of York; next to the York Barbell Company. The Strongman Exhibit, within the Hall of Fame, contains a collection of items attributed to Joseph Greenstein, known as “The Mighty Atom,” in his over five decades of entertaining at the York Fair.

Two of the feats, The Mighty Atom was famous for, included biting nails through and twisting iron horseshoes by hand. The pictured items are from performances of The Mighty Atom during the 1962 York Fair, when he was 82 years old.

In the following artwork, Cliff Satterthwaite captured The Mighty Atom during one of his free shows during the 1968 York Fair. By 1968, The Mighty Atom was setting up his trailer besides the poultry building. Cliff nailed the scene perfectly, with all the photos of The Mighty Atom performing various feats of strength hanging in the background.

The Cliff Satterthwaite artwork was used with his permission.  Cliff lived in York County, PA, from the mid-1950s to the early-1980s, creating a host of artwork, with much done live on location.  He has a book available containing nearly 400 images of his artwork from that time period;  e-mail contact is  monsterart4grani@aol.com

Cliff’s artwork shows The Mighty Atom selling one of his herbal concoctions; he also sold soap, that he claimed healthier, since it contained no animal fat. The shows were always free to view. I’d always get a kick out of his bantering with the crowd.  For a painting of this same scene, see: YORK FAIR Finger Ring Mementos crafted by The Mighty Atom.

Joseph Greenstein was born in Suvalk, Poland. He developed jujitsu and strongman skills; and after immigrating to America, they formed the basis for his career. He sold war bonds during both World Wars. He adopted the name “The Mighty Atom” because he was small in stature at 5-feet, 4-1/2-inches. When not performing, Joseph Greenstein was chief instructor of the New York City police department jujitsu program. The following is a photo of the upper part of a circa 1950s poster for The Mighty Atom, that hangs in the Strongman Exhibit at The Weightlifting Hall of Fame.

The ability of The Mighty Atom to bite nails in half earned him a place in the Guiness Book of World Records as the man with the world’s strongest bite. He was featured in Ripley’s Believe It Or Not several times. 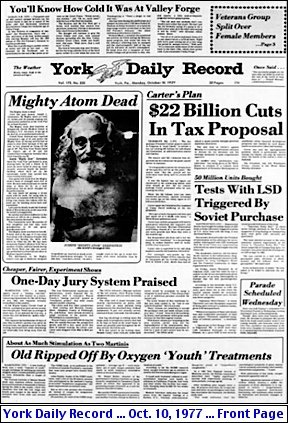 When Joseph Greenstein died on October 8, 1977, his obituary made front-page news in many of the communities that he entertained in fairs for more than half a century. His obituary in the York Daily Record was no exception:

The Mighty Atom is dead.

Until this past season, Joseph L. Greenstein, the Mighty Atom at 5 feet, 4-1/2 inches and 145 pounds soaking wet, entertained audiences at the York Fair for at least 55 years.

The Mighty Atom died Saturday at Kingsbrook Jewish Medical Center in Brooklyn, N. Y., his home, at the age of 84, 92, or 95, of an undisclosed ailment.

United Press International reported Greenstein’s age at 95 and quotes the Mighty Atom as having said he had no plans to slow down because of his age and, in fact, planned on living till the age of 197. The New York Times listed the Atom’s age at 84 and the vaudevillian/strongman recently told a York friend he was 92.

Joseph “Mighty Atom” Greenstein liked the York Fair and hated to miss playing here, he told a friend. In 55 years he never failed to show up, most recently ensconced beside the poultry building where he’d set up the homemade trailer that carried him cross country every year.

The discrepancy in the Mighty Atom’s true age is doubtless designed to spellbind and marvel as much as his feats of superhuman strength. “It was like him,” confided a friend, “to add a couple years to his age to make him seem ever more incredible than he was.”