The Magic Corn Sheller; it was Invincible

Floyd Stiles provided several photos of an Invincible Corn Sheller that he is restoring.  It was manufactured by the Keystone Farm Machine Company; in business in York, PA, between 1890 and 1919.  It is difficult to tie down an exact date of manufacture for this sheller, however after reviewing several Farm Machinery files at the York County Heritage Trust, circa 1910 should be close.

My Grandpa Barshinger was in the chicken and egg business later in his life.  All the corn he raised on his small farm went to feeding his chickens.  One of the earliest jobs he gave me as a very young child was to remove the kernels from ears of corn; manually.  The next several visits to Grandpa’s farm, I was content on removing the kernels manually.

Eventually Grandpa Barshinger showed me his corn sheller; if memory serves me correct, I think it was something like the Invincible model.  I thought it was magic, at how fast the kernels were removed.  When Floyd sent the photos showing the internals of the corn sheller, I guess it was the Engineer in me; I enjoyed seeing how these corn shellers performed their “magic.”

In the early 1870s business was booming for the Empire Car Works, one of two major railcar manufacturing firms within the City of York.  Empire had outgrown their cramped factory on the east side of North Beaver Street.  The proprietor of the Empire Car Works, Michael Schall, expanded by building a large new factory on the west side of North Beaver Street.  This new factory was completed in 1873.

After the Empire Car Works went out of business, the Keystone Farm Machine Company moved from their York Street 1890 start-up location to the empty Car Works about 1894 and when they went of business in 1919, a large building in the complex became the start-up location of the former Keystone Color Works.  In the 140 years of existence for this historic industrial structure, the three principal businesses that have occupied this structure have been:

Two readers have provided photos of products manufactured by the Keystone Farm Machine Company.  The post on Monday will examine the Economy Corn Sheller.  Continue reading for more on the Invincible Corn Sheller.

The collections of the York County Heritage Trust contain a file of Keystone Farm Machine Company information.  A product catalog is in this file; unfortunately it is not dated.  This is the catalog drawing of the corn sheller that Floyd is restoring; the Invincible One Hole Corn Sheller.

This end view photo, that Floyd supplied, shows the shaker end of the corn sheller.  This is where kernels of corn are sorted from the cobs after being pummeled by the gear-like wheels inside the sheller which separate the kernels from the corn cobs.

Details about the Invincible One Hole Corn Sheller are pretty sparse in the catalog.  The information specific to this model:  Capacity 25 bushels per hour, Price $12.00 and Weight 145 pounds.

The following construction details apply to all corn shellers produced by the Keystone Farm Machine Company.  The frames are made of Hard Maple, mortised and tenoned and are securely fastened together by joint bolts, steel dowels or brace rods.  Boxes are engine bored; Shafts are cold rolled steel; and Feed Spouts are adjustable for large or small ears of corn.

Letters in the York County Heritage Trust file of Keystone Farm Machine Company information ask about lettering and decorations used on their products.  My experience is that catalogs containing photos are the best guide.  In catalogs with only sketched illustrations, such as the Keystone Farm Machine Company catalog, artists tend to make the lettering and decorations fancier, as compared to what actually occurs on the products produced.  Thus the photos at the beginning of this post provide the best lettering guide. 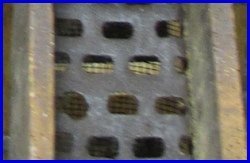 This zoomed-in detail of the shaker plate on the corn sheller shows the holes in the metal plate where kernels of corn drop, being sorted from the cobs; which fall off the end of the shaker.  The kernels drop onto another York product; wire screen produced by the New York Wire Cloth Company.  This wire screen allows small debris to drop through while the kernels of corn slide down the wire screen into a side funnel; from which they can fall into a container.