In a series of posts, I’m looking at the history of various families, structures and businesses in the area where the humpback bridge once stood on the Lincoln Highway at Stony Brook.  Other parts in this series include:

In part 1 of this series, we learned that the house at 3790 East Market Street was almost certainly built by Henry C. Hauser between 1875 and 1889; and likely closer to the low end of that range, when most of his children were still at home.

In part 2, I looked at 1900 Census records to understand how many people might be residing in the house that eventually was part of Ettline’s Antiques.  I also looked at family history of the John and Sarah Hauser Family of Hellam Township because all the Hausers in the Stony Brook area descend from three of their sons.

In part 3, I wrote about John H. Hauser; his was the first Hauser Family in the Stony Brook area in 1850.  He owned the sizable farm and Grist Mill; land upon which the house at 3790 East Market Street would be built about three decades later.

In part 4, I wrote about the family of Henry C. Hauser; the next owner of that land and the person almost certainly responsible for building the house that eventually was part of Ettline’s Antiques.  We also learned that the John H. Hauser homestead farm was 105-acres in size.

The 1937 Aerial Photo of Stony Brook area, at the beginning of this post, has the John H. Hauser ca. 1850 homestead property highlighted.  A 1919 deed allowed me to plot these metes and bounds.  This property passed down through family members throughout the years.  Few deeds were recorded except via noting neighbors and parcel sizes in Estate Papers; as I examined in part 4.

The April 8, 1919 Deed (Book 20X, Page 440) is from the widow Barbara E. Hauser to her daughter Anna M. H. Garber.  This deed contains the metes and bounds that refer back to the October 1875 proceedings; in which Henry C. Hauser is awarded parcel “No. One;” the homestead property of his deceased oldest brother John H. Hauser. 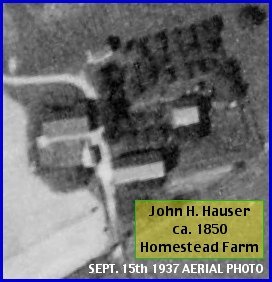 This enlargement of, what was, the John H. Hauser ca. 1850 Homestead Farm is from the 1937 Aerial Photo.  Recall from Part 3 that Grant H. Voaden noted, “I was first shown the site of this mill [John H. Hauser Grist Mill] by Jim Knobb on September 10, 1972.  In the 1910-20 era his father lived at this farm and there were no remains of a mill there at that time, yet he can remember old timers telling him that there was one there and showing him about where it was.”  Therefore one would not expect to see any Grist Mill ruins in this 1937 Aerial Photo, however the farmhouse and many of the outbuildings likely go back to the 1850s.

In the following 1937 Aerial Photo enlargement of the area around the Humpback Bridge, I’ve noted the location of the 3790 East Market Street buildings.  As far as when the Humpback Bridge was built in the 1930s, at least we know it was there by September 15, 1937. 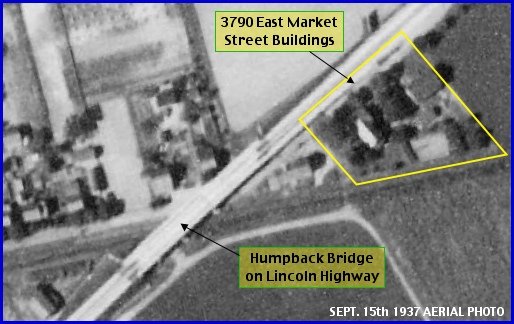 I’ve always found it interesting to see where the boundaries of these former properties appear in today’s world.  The following 2013 Bing.com Aerial View contains the outline of the ca. 1850 John H. Hauser Homestead Property.