In a series of posts, I’m looking at the history of various families, structures and businesses in the area where the humpback bridge once stood on the Lincoln Highway at Stony Brook.  Other parts in this series include:

In part 1 of this series, we learned that the house at 3790 East Market Street was almost certainly built by Henry C. Hauser between 1875 and 1889; and likely closer to the low end of that range, when most of his children were still at home.

In part 2, I looked at 1900 Census records to understand how many people might be residing in the house that eventually was part of Ettline’s Antiques.  I also looked at family history of the John and Sarah Hauser Family of Hellam Township because all the Hausers in the Stony Brook area descend from three of their sons.

In part 3, I wrote about John H. Hauser; his was the first Hauser Family in the Stony Brook area in 1850.  He owned the sizable farm and Grist Mill; land upon which the house at 3790 East Market Street would be built about three decades later.

In this, part 4, I’ll examine the family of Henry C. Hauser; the next owner of that land and the person almost certainly responsible for building the house that eventually was part of Ettline’s Antiques.

The above 1876 map section is similar to the map shown on my Tuesday post, except I’ve added 8 red stars and added a section of red shading.  The shading represents the 1875 newly acquired land of Henry C. Hauser, at least the north and west boundaries, along the roads eventually named East Market Street and Locust Grove Road.

It being part of the same tract of land which John Houser died seized, and which on the 22nd day of October, A. D. 1875 in proceedings in Partition had in the Orphan’s Court of York County, Pennsylvania, was awarded by the said Court to Henry C. Hauser, under name of Henry C. Houser, as Purpart #1 of the real estate of the said John Houser.

The Estate Papers of Henry C. Hauser’s brother John H. Hauser of Spring Garden Township (1827-1867) and those of his father John Houser of Hellam Township (1796-1875) contained the evidence John H. Hauser’s real estate was maintained by his father after his death.  John Houser (of Hellam Township) Estate Papers include the original of the October 1875 proceedings; in which the following is noted about “No. One” of the eight real estate parcels in John Houser’s Estate.

The description of “No. One” of the eight real estate parcels in John Houser’s Estate is from an earlier, August 1875, proceeding, of which the section documenting “No. One” is shown here: 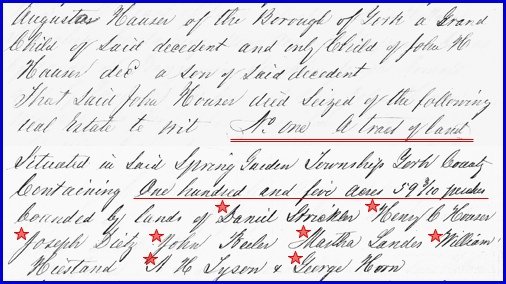 By this document, we know the size of “No. One”, 105.4-acres, and the names of eight neighbors, which I’ve marked with red stars.  I’ve placed the stars next to the same names on the 1876 map.  Henry C. Hauser’s newly acquired land has two virtually certain boundaries.  The north and west boundaries are along the roads eventually named East Market Street and Locust Grove Road.

The 1876 map was published in 1876.  In those days, data collection to prepare maps usually took a year or more in advance.  The “J. Hauser Hrs” notation represents J. Hauser Heirs, thus the map data in this area was collected prior to October 1875.  Henry C. Hauser is not on the 1860 Map however does appear in the 1860 Census for Spring Garden Township, which is why I’ve concluded he moved to, what is now Springettsbury Township, about in the late 1850s.  Henry C. Hauser’s early residence is noted on the north of East Market Street, i.e. when data was collected for the 1876 map.

The Henry and Nancy Hauser Family in Springettsbury Township

Henry C. Hauser was born October 1, 1832 in Hellam Township.  At the age of 25 he married Nancy Stoner on December 22, 1857.  Nancy was born during October 1831.  The Henry & Nancy Hauser Family move to, what is now Springettsbury Township, about in the late 1850s.  They had 5 children: Henry died December 25, 1889 and Nancy died May 23, 1910; they are buried in Stony Brook Mennonite Cemetery, Springettsbury Township. 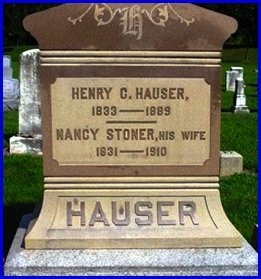 Henry’s gravestone in Stony Brook Mennonite Cemetery has a different birth year that the one that I gave in the previous paragraph.  Henry’s birth year appears as 1832, 1833 or 1834 in various documents during his lifetime.  The October 1, 1832 date that I’ve used comes from information in the old (published in 1828) John Hauser Family Bible.  This Hauser family information was provided to the Historical Society of York County October 5, 1951 by Mr. & Mrs. John S. Garber.

The 5 children of Henry and Nancy Hauser are:

Barbara A. Hauser was born March 11, 1867.  She married widower William H. Forry.  William was born November 23, 1861.  They had no children.  Barbara died March 20, 1939 and William died during May 1946; they are buried in Stony Brook Mennonite Cemetery, Springettsbury Township.