The First PULLMAN Company in York made Ventilators; Part 1

In Friday’s post I noted how I promoted putting more historical pieces in family history books while attending the 4-day National Genealogical Society 2013 Family History Conference in Las Vegas.  I told attendees to checkout YorksPast, starting this week, for a series on how to research the place of business where an ancestor worked.  The other posts in this series include:

I selected Pullman Ventilators because of local interest.  The Pullman identity ties into my post on Albert P. Broomell, he was responsible for the fabrication of the first motorcar in York, Pennsylvania.  The 1903 six-wheel Pullman Motor Car however was not the first Pullman named product in York; those honors go to products of The Pullman Automatic Ventilator Company.  Every now-and-then one uncovers surprises during research; this ventilator company in York was started by a man named Pullman, with direct ties to the originator of the Pullman name for railroad cars.

In a marriage license application for Walter Gilbert’s daughter Harriet, his occupation is listed as a Mechanical Engineer.  In doing family history research, I come across opportunities missed all the time.  Several years ago I discovered that another of Walter Gilbert’s daughter was Doris Heidler.  Doris was the Advance Engineering Department secretary when I was assigned to that department at York Division of Borg-Warner in 1972.  Sadly this discovery was made after Doris passed away in 1995.

While direct conversation with a close relative is preferred, an alternative is a Google search, where digitized trade publications may contain the information on the company being researched.  In this case, the trade publication The Iron Age of April 20, 1922 notes that Walter B. Gilbert & Co., York, Pa. have taken title to the plant and business of the Pullman Automatic Ventilator & Mfg. Co. 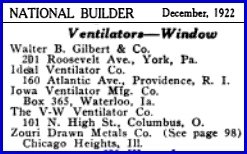 The construction buyers-guide National Builder issue of December 1922 lists the address of this company as 201 Roosevelt Ave., York, Pa.  Therefore combined with “Roosevelt Avenue and Railroad” in the ad at the beginning of this post; the plant is on the east side of Roosevelt Avenue next to the railroad tracks.

Another construction buyers-guide is Sweet’s Indexed Catalogue of Building Construction.  The 1906 issue has a full-page ad describing The Pullman Automatic Ventilator Company, with General Offices and Factory in York, Pa.

Check back later this week as I continue my research into The Pullman Automatic Ventilator Company.  The other posts in this series include: