The Curious Case of Zero Weather in York

I easily get distracted when looking through old newspapers on microfilm at the York County Heritage Trust.  This headline intrigued me, “Zero Weather in York Last Night.”  Of course, the article is reporting on temperatures near zero.  Continuing my intended search, I discovered an ad for heaters, with similar wording, “Zero Weather Has No Terrors.”  That is all it took to switch my search topic.  I wanted to know how long Zero Weather lasted.

The thermometer reading of zero degrees was far from the coldest part of a wicked polar vortex that hit in January of 1912.  Thermometer (and not wind-chill) readings of 30 degrees below zero produced the headline, “Way Below Zero Weather in York.” 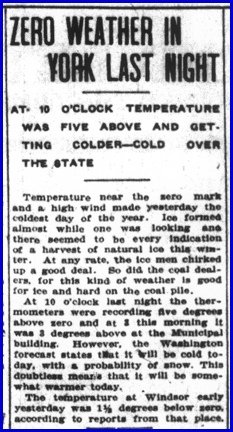 The rest of the article “Zero Weather in York Last Night,” from the January 6, 1912 issue of The Gazette follows:

“At 10 O’clock Temperature was Five Above and Getting Colder—Cold Over the State.”

“Temperature near the zero mark and a high wind made yesterday the coldest day of the year.  Ice formed almost while one was looking and there seemed to be every indication of a harvest of natural ice this winter.  At any rate, the ice men chirked up a good deal.  So did the coal dealers, for this kind of weather is good for ice and hard on the coal pile.”

“At 10 o’clock last night the thermometers were recording five degrees above zero and at 2 this morning it was 3 degrees above at the Municipal building.  However, the Washington forecast states that it will be cold today, with a probability of snow.  This doubtless means that it will be somewhat warmer today.”

“The temperature at Windsor early yesterday was 1-1/2 degrees below zero, according to reports from that place.”

Continue reading for the article on the really cold, “Way Below Zero Weather in York.”

Quoting a few paragraphs of the article “Way Below Zero Weather in York,” from the January 15, 1912 issue of The Gazette:

Thermometers at Various Points in the City Early Yesterday Morning Recorded From 12 to 22 Degrees Below and at Margaretta Furnace in Lower Windsor and Clear Spring in the Upper End of the County 30 Degrees Below Are Reported — Water Pipes in School Buildings Frozen Up.

There is a great difference in thermometers, but from the unanimous testimony of all of them yesterday was apparently the coldest morning in the past fifty years.  The records for the morning range all the way from 12 degrees below zero to 30 degrees.

That sounds a little bit like the weather news that comes from North Dakota, Minnesota and even the Yukon region.  It seems to be nearly putting York County into the Arctic Circle class, for these records were made in this county.

Incidentally, of course, there is much activity on the part of plumbers as there is also among coal men.  Even the ice men are on the jump, for now is the time to get in that ice of which we have been hearing so much in recent years of “scarcity” thereof.

But to come down to real hard cold facts, it was the coldest morning by far for many a year.  Water pipes were bursting, water backs were blowing up and pipes and flues were overheating as they seldom were before.

Here is that ad for heaters from York Supply Company at 18 North George Street.  The $5.98 coal heaters were “selling like hot cakes.”