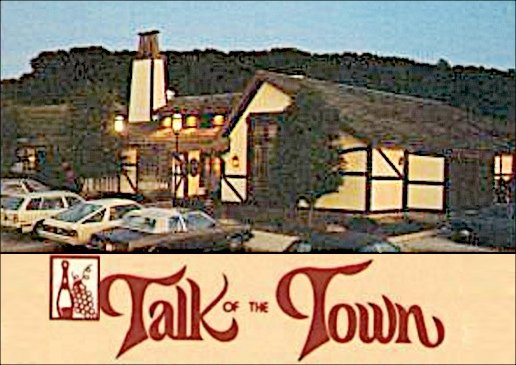 Remembering the Talk of the Town Restaurant in Springettsbury

The “Steak & Ale” became the popular “Talk of the Town Restaurant,” and was followed by: “Penrod’s Bar & Grill,” “al Dente! Italian Restaurant,” and presently “Arooga’s Grille House & Sports Bar.” Stretching from 1979 to the present, all five businesses were housed in various incarnations of the building situated south of the Burger King in Springettsbury Township; at 1211 Haines Road.

At a Grove family Memorial Day gathering, the Talk of the Town Restaurant was a trivia subject. Disagreement on several of the answers ensued. Dee Grove wrote for my help; while submitting images of a Talk of the Town postcard and comments about their many family meals at Talk of the Town:

“The Talk of the Town was our family’s go-to place. Mom was a good friend of Lorraine Nease, the long-time hostess and greeter of customers at Talk of the Town. Lorraine came from The Embers, in the lower level of the York County Shopping Center, next to the fountain. We did not eat at The Embers after Lorraine left. We always got the best tables at both places. For years, our family was regulars at the Talk of the Town. I bet at least once a week. We could afford it, because many chose the bargain all you can eat soup and salad specials. Salads were fresh and the soup always amazing.”

Research within Newspapers.com and personal experiences quickly provided the answers to the questions posed by Dee Grove. For this post, I dug a little deeper for the chronological details about the five businesses.

I concur with Dee, the “salads were fresh and the soup always amazing” at the All-You-Can-Eat Soup & Salad Bar at Talk of the Town. That is a feature that began in 1979, when Steak & Ale Restaurant was the initial business to open at the 1211 Haines Road site.

Restaurants in the Steak & Ale chain were known for Tudor architecture, stucco walls, rustic beams and cozy private dining rooms. The chain was founded in Texas during 1966 and peaked at 280 locations during the 1980s. From that high water mark, restaurants closed or were sold until only 58 locations remained when the Steak and Ale chain went bankrupt in 2008.

In June of 1982, the Texas-based Steak & Ale business in York County was one of the early locations to be sold to local ownership; upon which the restaurant name was changed to Talk of the Town.

The last time our family ate at Steak & Ale Restaurant was for a 1981 Christmas Dinner. The following photo shows one of the private dining rooms, where we gathered at a long stretch of tables, seating 28. Facing the camera is the family of one of my brothers; Stanley Smith.

I do not recall any significant changes to the exterior or interior of the building during the transition from Steak & Ale to the Talk of the Town ownerships. The 5,000-square-foot building had an overall seating capacity for 190. From the postcard, submitted by Dee Grove, the following photo shows the main dining room of the Talk of the Town Restaurant and Lounge.

The Talk of the Town had a much wider menu selection than Steak & Ale. The place billed itself as fine dining and was always packed. The business was sold after Gary & Lorraine Nease decided to retire in 1994.

In November of 1994, Tom Rontiris, owner of Wiener World in Springettsbury, and his brother-in-law, Michael Keriazis purchased the restaurant. After some renovations and small expansion, the new business opened in February of 1995. The new name for the business: “Penrod’s Bar & Grill,” which was billed as upscale casual dining.

In October of 1997, Penrod’s closed after Michael Keriazis sold his stake in the business to Chris Papayannis, a former chef at Bel Paese Italian Ristorante in Springettsbury Township. The new business, at 1211 Haines Road, opened in November as “al Dente! Italian Restaurant, with Chris Papayannis the chef. The business billed itself as upscale Italian.

“al Dente” closed in September of 2011, after the business was purchased by the Harrisburg-based chain: “Arooga’s Grille House & Sports Bar.” The 1211 Haines Road site was Arooga’s sixth location, and was called Arooga’s 124, after nearby Route 124; Mount Rose Avenue.

Renovations by the new ownership created a 6,500-square-foot building, while expanding the bar from 20-seats to 45-seats. The upscale American-style dining establishment is packed with televisions and projection screens, such that there is a view of every game from every seat.

Arooga’s Grille House & Sports Bar’s York location, Arooga’s 124, opened in January 2012. The franchise specializes in wings and burgers with many beers on tap.

One of the tougher trivia questions posed by Dee Grove: “Name all the businesses at the Talk of the Town site, and for bonus points list them by longevity, from most to least years in business.” My research shows nobody at the Grove family gathering should have been awarded bonus points. The correct answer is:

LoPiccolo’s in Violet Hill connection to The Woods in Springettsbury