Story of the Susquehanna Trail in the Good Roads Movement: Part 19

Just in time for Christmas, this post wraps-up the 19-part-series on the Susquehanna Trail. Thanks to my readers for the feedback and all the great comments along the journey. Several readers asked the question, “When driving from Harrisburg to the Maryland Line, what roads need to be taken today to retrace the route of the original Susquehanna Trail?”

The southern end of Bridge Street in New Cumberland is the scene shown in the photo where a Susquehanna Trail marker is superimposed. This bridge over the Yellow Breeches Creek, frames Old York Road—the northern Susquehanna Trail entrance into York County. 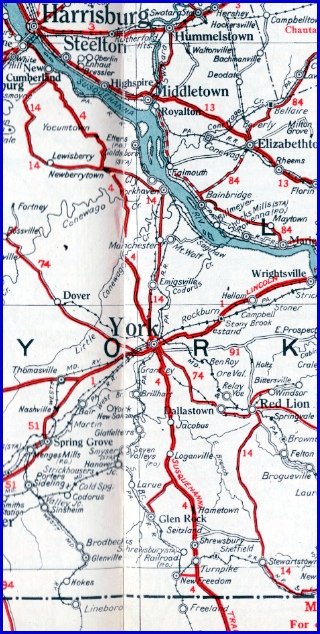 The complete name of this map book is: “The Official National Survey Maps and Guide for Pennsylvania, Lawton V. Crocker, Topographer, Published by The National Survey Company, Chester, Vermont, 1925.” The map book contains 48 pages of road maps covering the Commonwealth of Pennsylvania, plus a map index of villages and towns; along with a historical and descriptive guide. The description for York, Pa. within this 1925 Map Book is as follows:

York, Pa., county seat of York County, so named, with its neighboring county of Lancaster, after the two famous ruling houses of England, whose contest for supremacy is known as the War of the Roses, the white rose representing the house of York. 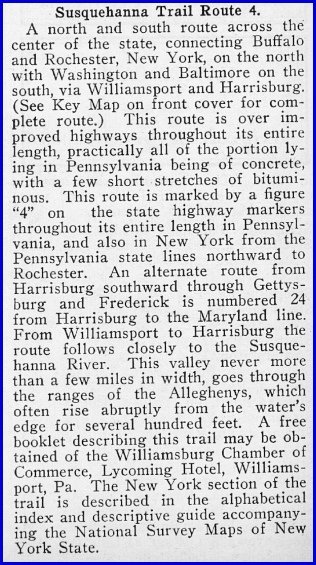 The 1925 Pennsylvania Map Book contains this description of the Susquehanna Trail, Route 4:

A north and south route across the center of the state, connecting Buffalo and Rochester, New York, on the north, with Washington and Baltimore on the south, via Williamsport and Harrisburg. This route is over improved highways throughout its entire length, practically all of the portion lying in Pennsylvania being of concrete, with a few short stretches of bituminous.

This route is marked by a figure “4” on the state highway markers throughout its entire length in Pennsylvania, and also in New York from the Pennsylvania state lines northward to Rochester. An alternate route from Harrisburg southward through Gettysburg and Frederick is numbered 24 from Harrisburg to the Maryland line.

From Williamsport to Harrisburg the route follows closely to the Susquehanna River. This valley never more than a few miles in width, goes through the ranges of the Alleghenys, which often rise abruptly from the water’s edge for several hundred feet. A free booklet describing this trail may be obtained of the Williamsport Chamber of Commerce, Lycoming Hotel, Williamsport, Pa.

The 1925 Pennsylvania Map Book contains this mileage chart for the Susquehanna Trail. Via the Trail, a journey from York, Pa., to Buffalo, N.Y. was 324 miles going north and 330 miles on the return trip to York; going south.  I’m not sure why the difference. 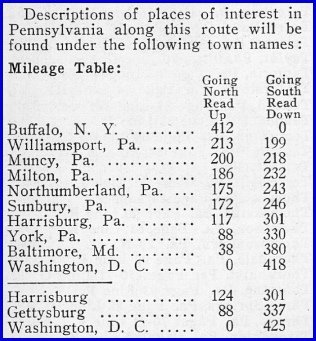