Story of the Susquehanna Trail in the Good Roads Movement: Part 13 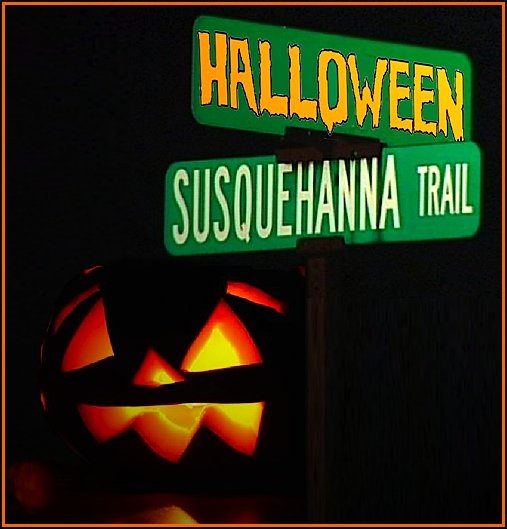 With the approach of Halloween in 1920, a masked carnival was part of the completion jubilee for the Susquehanna Trail in Shrewsbury. The concrete roadbed had been recently constructed through Shrewsbury, as far south as Turnpike. It had been over three years since the initial idea for a north-south Susquehanna Trail improved highway in Pennsylvania had been conceived.

Notification that York was officially selected to be on the Susquehanna Trail appears in the July 2nd, 1918, issue of The Gazette and Daily.  With the Susquehanna Trail foothold established to Centre Square in York, the Board of Governors of the Susquehanna Trail Association next took up the task of selecting the route that they would champion southward from York to the Maryland line. At the Board’s next meeting, on August 21st, 1918, State Route 127 was selected; this was the former Baltimore and York Turnpike.

It was the goal of the Board of Governors of the Susquehanna Trail Association to construct the whole road surface from the New York border to the Maryland line as a concrete highway. As the concrete highway was completed through many communities along the Trail, a celebration ensued; as was the case for the Trail’s completion through Shrewsbury:

Masked Carnival Marked the End of Work Near Shrewsbury

Shrewsbury, Oct. 24, [1920]—To celebrate the opening of the Susquehanna Trail, which is being built from Williamsport, Pa., to Baltimore, Md., and which was recently constructed through this place as far south as Turnpike, a carnival was held yesterday afternoon and last evening in the Square at this place. On account of the approach of the Hallowe’en season, which will [be] observed the latter part of this week, the funmakers were masked and there was a general display of Hallowe’en markers. The Shrewsbury band was present and discoursed the music for the affair and supper was served in the Shrewsbury hotel, now owned by Frank Sechrist, a miller, of Tolna, from 4:30 to 6 p. m. The supper was also appropriate to the Hallowe’en season. The proceeds of holding the carnival will be donated to the Shrewsbury borough council, to use as that body sees fit.

By no way was the whole Susquehanna Trail completed as the “ribbon of concrete” in 1920. It would be 1924 before the official opening of the Trail. In fact, parts of the Susquehanna Trail in York County remained as unimproved roadway until early 1924. One section of the unimproved Trail in Northern York County resulted in over 100 motorists getting stuck in the mud after a 1923 rainstorm.

In Part 11 of the Susquehanna Trail in the Good Roads Movement, I included early highway maps between York and Jacobus. I got several requests to see early highway maps closer to the Maryland line. Continue reading for those maps and to discover where Turnpike is located; with details how it evolved into Hungerford.

The following section of a 1941 State Highway Map of York County extends from Shrewsbury to the Maryland line. I like the 1941 map, because it shows locations of buildings. In 1941, Route 111 is the designation for the Susquehanna Trail. 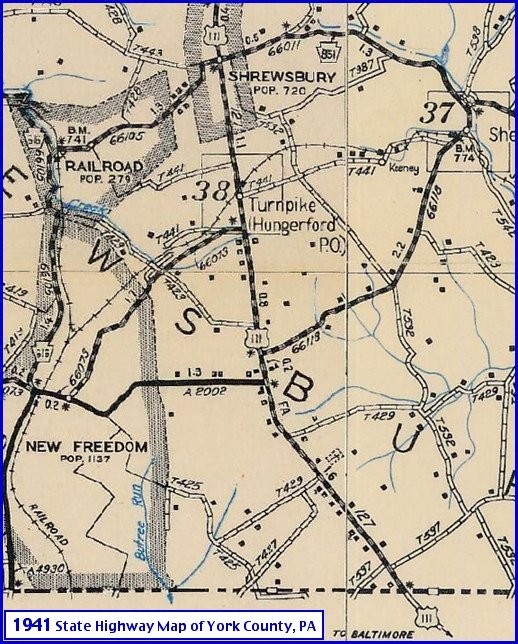 The newspaper article noted the Susquehanna Trail was constructed through Shrewsbury as far south as Turnpike, as of Halloween in 1920. On the map you can see that Turnpike is one-mile south of the Square in Shrewsbury. 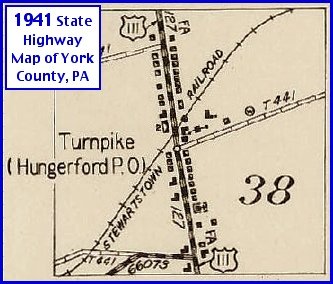 This detail for Turnpike is also provided on the 1941 map. The Stewartstown Railroad opened for service in 1885. The railroad crossed the Baltimore and York Turnpike as shown. This railroad-crossing stop was known as Turnpike and hence the early name of the community that evolved around this rail stop. It is possible there was a Turnpike Station building earlier than the current brick railroad station, which was built in 1923.

Alan Rehmeyer built a canning company near this crossing; he called it the Hungerford Packing Company. In 1926, the growing community thought they should have their own post office. Turnpike was a name already taken, so Hungerford was selected.

As indicated on the state highway map, in 1941, the community was still known as Turnpike, but the postal address was Hungerford. In 1930, Rehmeyer sold the Hungerford Packing Company to William A. Free, who greatly expanded the facilities.