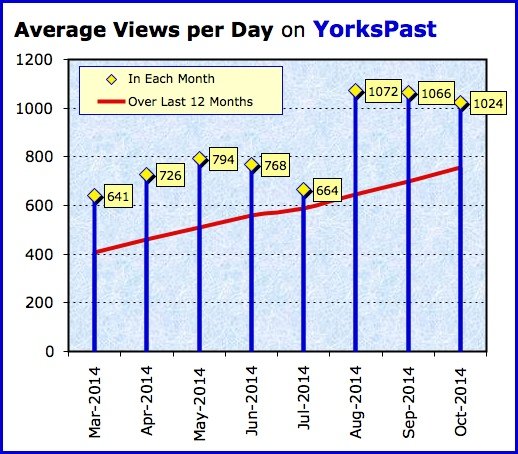 Susquehanna Trail posts dominated the most popular YorksPast posts during October. Just like August and September, the series on the Susquehanna Trail continues to provide a significant boost in YorksPast readership … THANKS again!

For my continuing series of YorksPast posts on the Trail, I’ve extensively relied on original research, primarily using news articles written during the planning and construction of the Susquehanna Trail. For example, I never knew about the competition between Gettysburg and York for being the next city on the Susquehanna Trail, before discovering these articles within microfilms of old newspapers (this competition begins here and ends here).

At the beginning of every month, I’m sharing with my readers the top 10 posts from the previous month. These are your favorites during October 2014:

Susquehanna Trail extends from York to the Maryland line

With the Susquehanna Trail foothold officially established from Harrisburg to Centre Square in York, the Board of Governors of the Susquehanna Trail Association next selected State Route 127, the former Baltimore and York Turnpike, as the route they would champion between York and the Maryland line. I use a side-by-side illustration of 1915 and 1941 highway maps between York and Jacobus to show the history of the evolution of this route.

At the July 17th, 1918, Sunbury meeting, the full Board of Governors of the Susquehanna Trail Association debated several routes between York and Harrisburg; all utilized Route 333, Route 250 or a combination of parts of these routes. The favored route selection went with Route 333; the most direct route from York to New Cumberland; through Newberrytown and Zion View. This is the Susquehanna Trail route we know today in northern York County.

This post contains links related to my latest historical talk about YORK Air Conditioning and Refrigeration; which covers the years 1935 to 2005. This new presentation was in response to several talks I gave in the past year on the first 60 years of the company; i.e. from 1874 to 1934. People wanted to know the rest of the story about The YORKS.

Arthur Lehman, Jr. provided photos of the pages of a 1902 Christmas Program for Shady Dell School in Springettsbury Township. Arthur’s grandfather, John R. Lehman, is one of the 31 pupils listed in the program. Arthur wanted to know where this school was located in Springettsbury Township. Using 1900 Census records I show why I believe, early in its life, Witmer’s One-Room Schoolhouse, along Stonewood Road, was likely know as Witmer’s Shady Dell School.

York Fair & Susquehanna Trail posts dominated the most popular YorksPast posts during September. At the beginning of every month, I’m sharing with my readers the top 10 posts from the previous month. These were your favorites during September 2014.

The 2014 Journal of York County Heritage was recently unveiled at the York County Heritage Trust. I authored the article “A Family of Printers, The Billmeyers of York Town and the Early Printing Profession.” In this post, I write about the inspiration for my article; the home of Michael Billmeyer.

This installment of my Historical Novel about the York railcar-building business of Billmeyer & Small was the next post that appeared after a promotional paragraph in the post “Billmeyer Printers of YorkTown.” Two years ago, I decided to use YorksPast to force me to finally start this novel. I’m on a weekly schedule of researching and writing an installment of the novel that appears every Thursday in YorksPast.

Establishment of the Susquehanna Trail in York County during 1918

The Road to JOPPA; origins of Susquehanna Trail in Southern York County

Early origins of the Susquehanna Trail in southern York County can be traced back to the road between YorkTown, Pennsylvania and Joppa, Maryland. A reader asked to see the whole York to Joppa route through York County and Maryland; which I highlighted in this post on some of the earliest highway maps.

With the approach of Halloween in 1920, a masked carnival was part of the completion jubilee for the Susquehanna Trail in Shrewsbury. The concrete roadbed had been recently constructed through Shrewsbury, as far south as Turnpike.