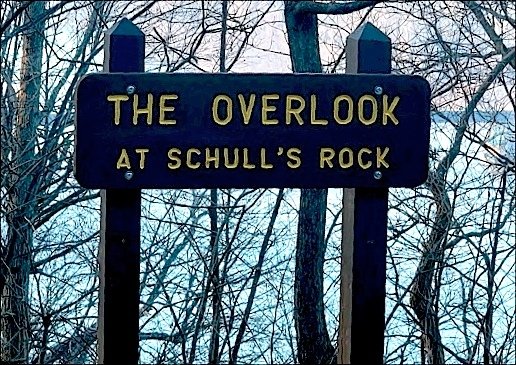 The Overlook at Schull’s Rock is one of the featured sites within Susquehanna Riverlands State Park. That rock was locally known as Schull’s Rock (with spelling variants) since 1880; and is a named feature on USGS Topographic Maps since 1936.

Even with an overcast sky, the new Susquehanna Riverlands State Park had a good many visitors earlier this week. A few vehicles were in the East Parking lot, near the entrance off of Furnace Road, and the Central Parking lot contained 14 vehicles; where most visitors followed the Overlook Trail, leading to Schull’s Rock.

The 1908 Topographic Map, updated to 1936, is the first USGS Map, which includes the Schulls Rock annotation. The 2023 Map shows the northeastern section of Susquehanna Riverlands State Park; with dark green for the forested lands and light green for open fields. The RED Area is Private: No Trespassing.

The Central Parking location, within Susquehanna Riverlands State Park, is on the south side of the dirt road in the park; whose entrance is off of Furnace Road. The Overlook Trail, to Schull’s Rock, is north of the parking spot. In the background are open fields in the center of the park, which are framed by trees; prior to the gorge where the Codorus Creek flows into the Susquehanna River. Smoke from Brunner Island Steam Electric Station is at the left side.

If anybody knows stories concerning the naming of Schull’s Rock, please comment. One story appeared in a York Dispatch article, of November 10, 1992: “According to Ealora Holland, historian for the [Kreutz Creek Valley Preservation] Society. One of the best stories connected to the new names [of lanes in Hellam Township] is the legend behind Schull’s Lane. This name comes from the landmark Schull’s Rock, which juts out over the valley. The rock was named for farmer Schull, who, in a fit of anger with a recalcitrant mule, backed it off over the edge of the rock.”

Early in 1937, the area encompassing the new Susquehanna Riverlands State Park was part of a proposal by the Conservation Society of York County, and other civic organizations, for an Indian Memorial Park. The main feature was a 26-mile long Indian Memorial Trail from York, along the Codorus Creek to the river, then continuing down along the Susquehanna River to Indian Steps. The trail would be used for hiking and biking, plus would also include a bridle path. After the trail was finished; benches, tables, shelters, sanitary toilets, etc. would be constructed at strategic points along the trails.

The project had the support of the National Youth Administration (NYA), which was a New Deal agency, focusing on providing work and education for just out of school youth; between the ages of 16 and 25. It operated from 1935 until 1939 as part of the Works Progress Administration. Unlike the Civilian Conservation Corps, the NYA included young women. In 1937, there were 7,000 NYA projects nationwide employing 182,000 young men and women. The Indian Memorial Park project in York County was one of those projects.

One of the featured sites along the Indian Memorial Trail was Schull’s Rock; as reported in The York Dispatch of May 31, 1937: These “views were taken from Schull’s Rock, along the Susquehanna River, below the Haines Hunting Lodge last week by Wendell Trout, supervisor of the NYA [National Youth Administration], who is co-operating with the Conservation Society in the construction of Indian Memorial Park.” The views are described; three of which are abbreviated as follows: No. 1 is a photo looking up the river towards the Pennsylvania Railroad freight bridge. No. 4 is a photo of Needle Point Rock, which stands on the north side of Schull’s Rock and extends over 100-feet in the air. No. 3 is a photo looking down river. “All pictures are representative of the wonderful natural developments of Indian Memorial Park.”

One of the goals within the Indian Memorial Park project was the acquisition and restoration of Codorus Furnace; which the Conservation Society of York County still owns. Ground was broken on the first section of the Indian Memorial Trail along the Codorus Creek at the present Smalls Athletic Field on April 21, 1937.

The dedication ceremonies opening the first section of the Indian Memorial Trail occurred November 11, 1937. A group of full-blooded Indians from the Congress of American Indians took part in the parade and in the exercises marking the opening.

As part of the exercises, Henry C. Ulmer, executive secretary of the Conservation Society of York County, was made a chief of the Sioux Indians in ceremonial rites conducted by Chief Lone Eagle, Ogalala Sioux, of Pine Ridge, South Dakota.

The Indian Memorial Project of York County temporarily lost NYA funding in June of 1939. Three months later, NYA funding is permanently lost for all such projects; with all such funds channeled into war readiness production.