Originally a three-dimensional wall sculpture was envisioned for an empty foyer space on the top floor of YORK’s new Headquarters in 1969.  Salvaging Creativity probably would have got the job, if they existed back then; after all, they use many discarded YORK compressor parts in their creations, as seen along streets downtown.

The 4 x 6-feet painting was created in 1969 for the foyer of the Executive Floor of the newly built YORK Headquarters.  This painting was displayed in the fourth-floor foyer for over thirty years until offices on that floor were remodeled. 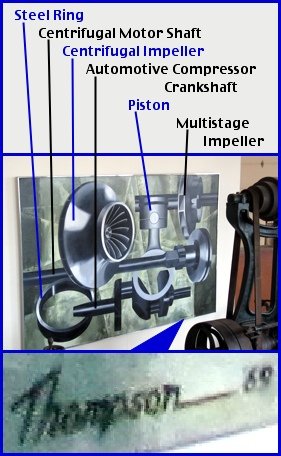 The painting of YORK machined compressor parts was part of several donations from York International Corporation to the York County Heritage Trust around the year 2000; including the huge York Manufacturing Company A-Frame Ammonia Compressor on display in the Hall of Giants at the Agricultural and Industrial Museum.  The painting of 1960’s machined compressor parts is presently displayed on a wall behind machinery associated with a turn-of-the-century machine shop.  That machine shop is located on the upper floor of the Agricultural and Industrial Museum, next to the Codorus Creek side of the building.

The YORK Shop News of May-June 1970 contains the story of the 4 x 6-feet painting created by Kenneth J. Thompson for the Executive Floor of the YORK Headquarters.  Within this story, the various objects in the painting are listed; I’ve pointed them out in a photo taken at the Agricultural and Industrial Museum.

Some may question why an automotive air conditioning compressor crankshaft is shown.  The story goes, profits from sales of millions of YORK Automotive Compressors paid for the construction of the Headquarters Building in York.

The engineering research and development on YORK Automotive Compressors was done in York, Pennsylvania, however the production was located at YORK’s Decatur, Illinois Plant.  That plant produced about 10,000 YORK Automotive Air Conditioning Compressors per day, with Ford their biggest customer.

Continue reading for the whole story about the painting, as told in the YORK Shop News of May-June 1970.

The YORK Shop News of May-June 1970 contains the story of the 4 x 6-feet painting; quoting from page A & C:

YORK Division’s versatility, progress and stability are dramatically portrayed in a large futuristic painting recently mounted in a foyer of the Division’s new Main Office Building.  And, appropriately, the work was entirely an “inside job”.

Shortly after the completion of the new headquarters building, it was determined that a large, blank wall area of the fourth floor foyer, serving the executive offices, needed some sort of appropriate decoration.

Originally, a three-dimensional wall sculpture had been considered.  Kenneth J. Thompson, advertising and sales promotion manager, along with others within the company, submitted some suggestions.  Thompson recommended a large painting and presented a small charcoal sketch of the design.

This was accepted.  Measurements of the area determined that the size of the finished work should be 4 x 6 feet.  The design concept of the painting was to reflect York’s versatility, stability and progressive nature.  Thus, according to the artist, the objects depicted include centrifugal impellers, both single and multistage, to portray York’s engineered machinery and refrigeration leadership, along with a centrifugal motor shaft.  A piston and crankshaft are symbolic of the packaged products lines and automotive compressors.  (Actually, the crankshaft shown is from an automotive compressor.)  A single steel ring, common to all York products, is the final object used.

All this, according to Thompson, is depicted in a representational manner to denote stability, reliability and strength and was largely executed with a brush.  The objects are set against a modernistic, futuristic background of broken greens and yellows, complementing the green carpeting.  In total, it portrays the forward-look, in terms of products and markets, that also serves as part of the company’s philosophy.  This portion of the picture was painted entirely with a pallet knife.  A total of about 6-1/2 pounds of paint was used.

Thompson stated that the completed work required about five weeks.  Some of the underpainting was done in plastic acrylics and the entire painting completed in oils.  The frame, also fabricated by the artist, was made from aluminum stock used by the company in the fabrication of its products.

In the field of painting, Thompson began about 10 years ago.  He has received recognition in many local art contests and exhibits including awards in the Keystone Roofing competition and the Downtown East art show.