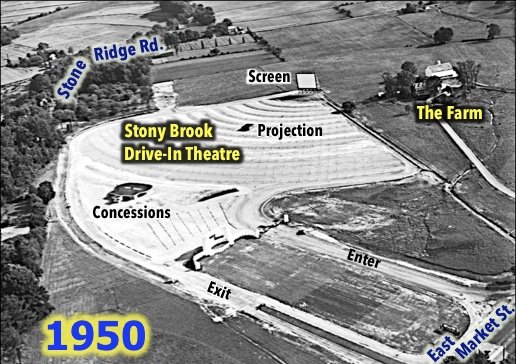 This post explores an assortment of four Stony Brook Drive-In Theatre queries from YorksPast readers. Their curiosity ranged from the history of the Hoke Farm, upon which the Drive-In Theatre was constructed in 1949, to a comment involving a nearby York County company that manufactured outdoor screens for Drive-In Theatres; for installation all over the East Coast.

The southward looking aerial photo, taken on June 5, 1950, shows the Stony Brook Drive-In Theatre and buildings of The FARM on which it was constructed. The grand opening of the drive-in was held October 5, 1949.

Several months ago Dale Doll wrote: “My father helped install the wider screen at the Stony Brook Drive-In. It was in kit form and was picked up at the York County factory making it. Dad always told the story that company was famous for quickly making the wider screen kits erected at Drive-Ins all over the East Coast. Do you know anything about that company?”

Hollywood started producing movies in a new wide-screen format known as CinemaScope during 1954. In rapid succession, indoor movie theatres quickly made the necessary modifications to accommodate wider screens. A few months later, outdoor Drive-In Theatres followed suit. Many Drive-Ins that existed in 1954, installed the wider screens by the start of the 1955 season.

If one looks at the Stony Brook Drive-In screen within the introductory aerial photo, one sees the initial screen used from 1949 until 1954. The following photo shows the Wide-Vision CinemaScope SCREEN, which was installed at Stony Brook Drive-In Theatre for the 1955 season.

The photo of the Wide-Vision CinemaScope SCREEN is a cropped version of a photo utilized in a post about Easter Sunrise Services which St. John’s Lutheran Church held at the Stony Brook Drive-In on Sunday April 21, 1957.

Quoting The York Dispatch of June 5, 1954 from an article on page 13, “Cinemascope screens for outdoor movies have been fabricated in York for the first time. Officials of Carew Steel Products Corporation reported their firm has been awarded a contract by Signs Inc., of Boston for screens to be erected in 13 cities in nine Eastern states. The company plans a production line for new orders.”

A post was done about Metal building pioneer Howard Carew. Within that post an aerial photo shows the Carew Steel Products factory along the eastern end of Industrial Highway in Springettsbury Township. That would have been the factory where the kits were produced to erect Wide-Vision CinemaScope Screens. Part of the Carew factory can be seen in the extreme upper left of the following 1957 aerial photo.

The location of the Stony Brook Drive-In Theatre within the eastern section of the former Hoke FARM is shown in the following 1957 aerial photo. Yellow dashed lines are used to indicate the boundaries of the 57.4-acre farm, which Howard & Susan Hoke purchase on March 10, 1917. Mites and Bounds are from Deed Book 20G, page 634.

In a query of several years ago, Tim Owens heard Governor George Leader’s family had some sort of involvement in establishing the Stony Brook Drive-In Theatre. Tim wanted to know if that was true.

A relevant article was discovered on page 43 of the July 23, 1949 issue of Billboard Magazine: “Stony Brook Gets Charter. York, Pa., July 16. – A State charter has been issued to Stony Brook Drive-In Theater, Inc., here, authorizing the new firm to capitalize at $67,500 for the purpose of operating drive-in theaters. Incorporators were listed as Paul J. Binder, Henry B. Leader and Laurence T. Himes.”

Paul J. Binder was a York realtor and developer. In 1949, Henry B. Leader was a York attorney and brother of soon-to-be Governor George M. Leader. Laurence T. Himes was an Army Air Force pilot during World War II, after which he got his law degree and was admitted to the York County bar earlier in 1949.

Deed Book 30Q, page 636, reveals Paul J. Binder purchased the majority of the Hoke Farm on August 23, 1944. Possibly that land was purchased on speculation, until Paul decided to go ahead with the Drive-In Theatre idea; after two attorneys, that he knew, decided to invest in that enterprise.

Ownership lineage of the Hoke Farm

Carol Sweitzer inquired about the ownership lineage of the land, prior to the Stony Brook Drive-In Theatre being built. In the post about the graveyard along Eastern Boulevard at Stone Ridge Road, it was noted the gravestone inscriptions, on Hoke’s farm were recorded in 1932 by the Historical Society. Carol wanted to know which Hoke, since her grandmother’s maiden name is Hoke. Her great-grandfather also told of hearing stories as a boy, by a Civil War veteran on that farm, or maybe at a neighboring farm. Carol wondered if the veteran was John Fried [1817-1894] buried in the graveyard.

The following aerial photo shows the Hoke Farm surroundings during 1937. The Yellow dashed lines are used to indicate the boundaries of the 57.4-acre farm. The location of the family graveyard on this farm is indicated.

In 1801, Samuel Landis purchases one of the divided up farms, containing 59.7-acres, from Jacob Strickler. The Mites & Bounds have the northern boundary of the farm along the Great Road from Lancaster to York Town, i.e. now East Market Street, and a section of the eastern boundary of the farm is along Stone Ridge. Revolutionary War Veteran Samuel Landis established a graveyard on his farm, where his suspected daughter Magdalena Keeney was buried in 1830. Samuel was buried there in 1833, and his wife Anna was buried there in 1837.

In 1837, John and Mary Throne purchase the Landis farm. After John Throne died in 1854, the Widow Mary Throne remains the owner of the farm until her death in 1895.

George R. Strickler purchases the farm from the Estate of Mary Throne in 1896. George was a Civil War veteran, and since he lived until 1905, he is more likely the veteran that told stories to Carol’s great-grandfather when he was a boy; i.e. as opposed to Civil War veteran John Fried, who died in 1894.

The following is the York County Veterans’ Grave Registration Record for George Ruby Strickler [born 25 May 1844, died 8 April 1905]. George served as a Corporal in Company K, 142nd Regiment, Pennsylvania Volunteers during the Civil War. George and his wife Elizabeth are buried in Strickler’s Cemetery; located next to York County Prison.

The following concessions menu was on a Stony Brook Drive-In Theatre flyer from 1955. Then, the cost of a grilled cheese and bacon sandwich was 35-cents.

The following 2015 Street Aerial is used to show the extent of the former FARM of Howard & Susan Hoke; whose boundaries are indicated by yellow dashed lines.

Stony Brook Drive-In Theatre; and the answer is Spaceballs