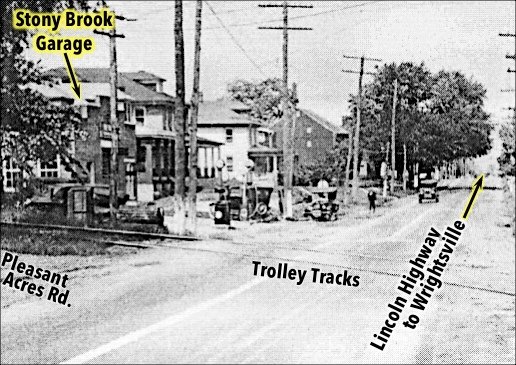 April of 1921 featured the opening of the Stony Brook Garage by Strickler brothers Paul and Stuart along the Lincoln Highway in York County. At that time, Paul B. Strickler was 24-years old and Stuart L. Strickler was 17-years old. They were sons of Edward E. Strickler; a well to do farmer in Hellam Township.

The Stony Brook Garage is pointed out on a circa late 1920s photo; which is a view looking east on Lincoln Highway at Stony Brook in Springettsbury Township. The earliest descriptions for the garage noted it was a, “full service gas station repairing all makes of cars and specializing in automobile electrical systems.”

The Stony Brook Garage was an early Lincoln Highway business, operated by a founding owner for 53-years; from April of 1921 until December of 1974. Details are provided later in this post.

The whole circa late 1920s, eastward looking, photo, from the collections of the York County History Center, shows a trolley passing over Stony Run where it crosses the Lincoln Highway in Stony Brook; i.e. just east of the Locust Grove Road intersection. The trolley is on the south side of the Lincoln Highway (East Market Street) and is about to travel across the highway and head north beside, and then on, what is now Pleasant Acres Road.

I’ve marked the path of the trolley on the following 1937 Penn Pilot aerial photo. The trolley photo would have been taken at a point in the extreme lower left corner of the aerial photo. The trolley would then travel the route of the green and white dashed lines to the upper right corner, on its way to Wrightsville. During the time of trolley travel, the humpback bridge on the Lincoln Highway did not exist, however a bridge did exist over the railroad tracks on what would become Pleasant Acres Road.

The Stony Brook Garage was also, unofficially, know as Strickler Brother’s Garage and then Strickler’s Garage; especially later when Stuart Strickler became the primary owner. Through the 1920s and 1930s, the garage was agent for various makes of automobiles, including: Buick, Dodge, Willys, Overland, Oldsmobile, DeSoto, Plymouth, and Pontiac. The following July 24, 1928 Stony Brook Garage receipt, via Pinterest, is for a Buick sold to John Fisher.

The following circa 1940s or 50s photo of Stony Brook Garage is from the Charles Ness Service Station Collection at York County History Center. At that time, the garage is selling Atlantic gasoline. The road at the extreme left side of the photo is Pleasant Acres Road.

The death of Stuart Strickler, Jr., in September of 1974, resulted in the decision by his father to close the garage in December of 1974. Beginning in January 1975, B. & B. Glass and Upholstery Company of Baltimore occupied the building at 3701 East Market Street under a lease-sales agreement. B. & B. purchased the building in 1981. The building is presently vacant.