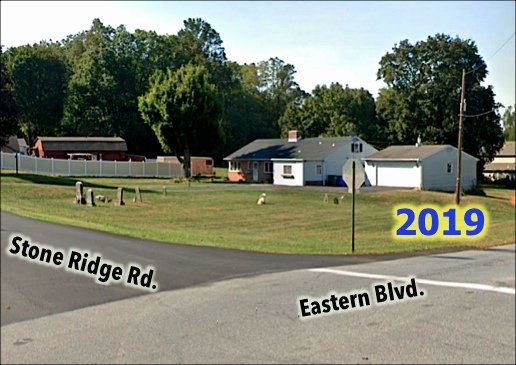 Research into the often-asked question: “Why is a Graveyard along Eastern Boulevard at Stone Ridge Road?” revealed a surprise. It was generally known, that the graveyard accepted burials from churches, which stood directly across Stone Ridge Road. However the burial ground origins go back further; to at least 1830 when a Revolutionary War Veteran established the graveyard as a family burial plot, at that site, on his farm.

A clue, provided during the September 2021 Yorkshire History Walk, directed me to an excellent source about the churches, which stood directly across Stone Ridge Road from the Burial Ground. In 1992, Doris L. Emenheiser compiled and published a history of the “Yorkshire United Methodist Church 1879-1992.”

A Methodist Episcopal Church, dating back to at least 1849, initially stood opposite the Graveyard until it burned to the ground on October 20, 1878. After which the Evangelical Association purchased that church lot on the east side of Stone Ridge Road; where the Stony Brook Evangelical Church was built in 1879. Mahlon Haines approached that congregation in 1925 about moving their church into the Yorkshire development. That move occurring in 1926, after the second church, of that congregation, is built along First Avenue in Yorkshire; with a name change to Yorkshire Evangelical Church.

Inscriptions of 24 Gravestones were recorded November 17, 1932

A 1930s project by the York County Historical Society recorded all gravestone inscriptions in York County. On November 17, 1932, Alice E. Starner and Henry J. Young recorded the inscriptions of all remaining gravestones within the burial ground along Stone Ridge Road. They recorded information from 24 gravestones and named the graveyard: Evangelical Burial Ground, located on Hoke’s farm in Springettsbury Township. However, a deed search shows the church never owned the graveyard.

Today 13 gravestones still stand, with pieces of about 5 gravestones on a pile. For Memorial Day of every year, American Flags are placed next to four of the standing gravestones: one Revolutionary War Veteran, two War of 1812 Veterans and one Civil War Veteran.

A hedge surrounded the burial ground for many years, and up to about 7-years ago a suspected descendant of one of the burials trimmed the hedges and mowed the grass. The following shows that excellent upkeep via a 2013 Google Streetview.

Evidently the person maintaining the burial ground could no longer do it; and apparently could not recruit somebody to take over the task. The hedges grew out of control in a few years and became a line of sight safety hazard for the traffic at that intersection. Springettsbury Township removed the hedges and now trims the grass within the graveyard.

Doris L. Emenheiser’s history of the “Yorkshire United Methodist Church 1879-1992” contained the following photo of the Stony Brook Evangelical Church; which was located directly across Stone Ridge Road from the Burial Ground. The wooden church was built in 1879 and was vacated in 1926.

Doris Emenheiser noted, “One door opened to an aisle which ran down the center of the church. Men and women sat on separate sides of the aisle. A pot-bellied stove supplied heat. Light was provided by a kerosene lamp on the pulpit, a chandelier lamp over the center aisle and two kerosene lamps on the side wall. The benches were wooden.”

The next two 2021 eastward looking photos are annotated, to point out the locations of the 13 gravestones which still stand within the Evangelical Burial Ground. Also pointed out are the names likely associated with pieces of the 5 gravestones on a pile just south of the Norris Holtzinger gravestone.

The first photo focuses on the cluster of gravestones, nearest to Stone Ridge Road, in the eastern section of the graveyard. These 8 still standing gravestones are for:

The names likely associated with pieces of the 5 gravestones on a pile just south of the Norris Holtzinger gravestone are:

There are 6 remaining gravestones, not yet noted; which were recorded by Alice E. Starner and Henry J. Young during November 17, 1932. These gravestones may have fallen at some point in the past and become overgrown by sod. These six gravestones include:

The following photo shows the present back of the Samuel Landis gravestone; with the incorrect War of 1812 Veterans’ marker.

The following is the York County Veterans’ Grave Registration Record for Samuel Landis; which was created in1936 by Abend. He estimated birth as 1755; a close approximation, since Samuel was actually born Dec. 22, 1754 and died Sept. 6, 1833. Samuel’s service in the Revolutionary War, as Pvt. 3rd Class in Capt. Peter Imswiller’s Company is as recorded in the Pennsylvania Archives, 5th Series, Volume #3, page 573.

The following photo shows the front of the Samuel Landis gravestone. Quoting the inscription: “SACRED to the Memory of SAMUEL LANDIS, he departed this life September 6th 1833, aged 78 years, 8 months, & 15 days.”

The earliest burials in the graveyard occurred in 1830, 1833 and 1837; which were Magdalena Keeney (believed to be the daughter of Samuel & Anna Landis), Samuel Landis, and Anna Landis, respectively. I wondered if these burials were the origin of a family burial ground on Samuel’s farm.

In a Deed Search for farms owned by Samuel Landis, a match was found in Deed Book 2P, Page 285. On June 8, 1801, Samuel Landis purchases a 59.7-acre farm from Jacob Strickler. One of the Mites & Bounds courses, in the southeast corner of the farm extended 565-feet between two posts on Stone Ridge, with that neighbor listed as David Brubaker. Another course extends 1,650-feet, fronting the Great Road from Lancaster to York Town.

The Mites & Bounds of this farm, per Deed Book 2P, Page 285, place the “Evangelical Burial Ground” burial ground within the Samuel Landis farm. Therefore Revolutionary War Veteran Samuel Landis established the graveyard as a family burial plot, at that site, on his farm.

Links to other posts about small family graveyards in Springettsbury Township:

Discover the Graveyard of earliest Spangler in York County

Location of the other Strickler’s Cemetery in Springettsbury Township