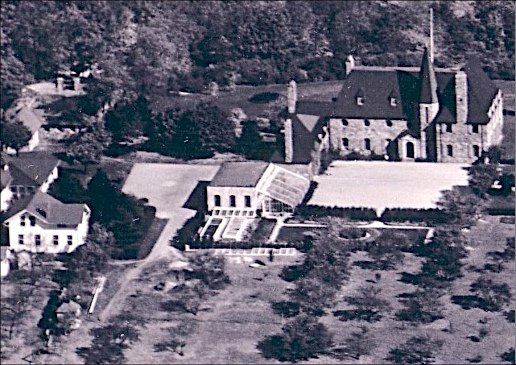 Stone Fence Acres is the name given to ongoing land acquisitions in Chanceford Township by internationally known artist Jeff Koons. Following a talk last November by the owner of a farm in Chanceford Townsip, a comment was made: “I don’t doubt, with his resources, Jeff Koons’ acreage will eclipse Lauxmont Farms.”

Over one-hundred years ago, wealthy York industrialist S. Forry Laucks began a pattern of land purchases in Lower Windsor Township; he named those lands Lauxmont Farms. For the next 26-years, until the year prior to his death in 1942, Laucks offered top dollar (compared to normal farm prices in those days) to get a patchwork of small family farms to sell to him; to allow continuous expansion of his estate overlooking the Susquehanna River.

The person making the comment last November, continued with, “I’ve heard his [Jeff Koons] land holdings are approaching 700-acres.; already about half the size of Lauxmont Farms.” In books and newspaper articles, I have seen Lauxmont Farms generally described as several hundred acres on a few occasions, however more often several thousand acres. When numbers are noted about the Lauxmont Farms acreage, all of the following have been observed in print: about 1500, nearly 2000, over 2500 and almost 3000-acres.

I decided to do a deep dive deed research, concerning S. Forry Laucks’ Lauxmont Farms in Lower Windsor Township. The first surprise, it is often stated his initial purchase was in 1918; when actually the first purchase was in 1914.

Shaded areas, on the following illustration, are per Mites & Bounds of the initial tracts acquired by S. Forry Laucks for Lauxmont Farms; during November 25, 1914 [16.5 acres, per Deed Book 19P, Page 207] and April 1, 1916 [97.7 acres, per Deed Book 20V, Page 302]. These are plotted on a 1964 topographic map of the northern-most section of Lower Windsor Township. The introductory 1932 eastward looking aerial photo, in this post, focuses on the Chateau; which Laucks had built on the 16.6-acre site.

The following eastward looking aerial photo is a wider view of the upper part of S. Forry Laucks’ Lauxmont Farms in 1932. It encompasses part of the initial 114.2-acres S. Forry Laucks purchased along the Susquehanna River during 1914 and 1916. This area includes the residences, gardens, greenhouses, orchards, etc. Later in 1933, the Lauxmont Farms Dairy complex was completed in fields located south of the Lauxmont residences. That dairy complex featured a 50-ft. diameter lounge, with a terrace overlooking the river and surrounding country; and is presently used as a wedding venue.

S. Forry Laucks gained his wealth as the head of the York Safe & Lock Company; where under his management, the firm became a world leader in the manufacture of bank vaults. That firm also was a major defense contractor during WWI and WWII.

After Dr. Pack began spending more time on the farm during the 1960s, he started to buy back some of the lands originally part of Lauxmont Farms. He even added lands that were not originally part of S. Forry Lauck’s Lauxmont Farms; one such tract includes what is now much of the present Native Lands County Park, via Dr. Pack’s 1966 land purchase from Lloyd Leibhart.

The 1,370-acre version of Lauxmont Farms has since been reduced due to some large-lot residential development and the creation of the 180-acre Native Lands County Park and the 70-acre Highpoint Scenic Vista & Recreation Area. The following photo shows the sight looking down the Susquehanna River from York County’s Highpoint Scenic Vista. This telephoto view, past Turkey Hill, reveals the shoreline of Chanceford Township in York County.

Jeff Koons’ maternal grandparents Ralph B. Sitler and Nell (Dabler) Sitler, owned a 40-acre farm in Chanceford Township, which they primarily used as a weekend getaway from running a business in York. On November 21, 1958, they sold their farm to Attorney John H. Richards, Jr., who initially used the property as headquarters for Philadelphia area’s Rose Tree Fox Hunting Club operations; during the early phases of transitioning to York County.

The York Dispatch of December 16, 1959, contained an article with the headline, “Swanky Hunt Club Locating in County.” One of the paragraphs noted: “A year ago Richards and his wife purchased from Mr. and Mrs. Ralph B. Sitler, 42 North Queen Street, a 40-acre property near New Bridgeville, which the Sitlers called Stone Fence Acres.” Of interest is the address for the Sitler’s place in York; 42 North Queen Street. As a coincidence, S. Forry Laucks place of residence, when in York was 40 North Queen Street.

In the following illustration, a line of sight arrow points down river from York County’s Highpoint Scenic Vista. The view past Turkey Hill, reveals the shore line of Chanceford Township in York County, where the line of sight arrow points to a high bluff overlooking Lake Clarke; it is one of the initial tracts purchased by Jeff Koons in 2006 for ‘Stone Fence Acres L.P.’ That high bluff has an elevation of 620-feet, versus the Chateau, at Lauxmont Frams, which is at an elevation of 640-feet. Lake Clarke’s elevation is 228-feet above sea level, therefore any residence on these bluffs are 392-feet and 412-feet above Lake Clarke, respectively.

The 2022 Google Terrain Map illustration is of the northern-most section of Chanceford Township, York Co., PA. The green shaded areas are per the Mites & Bounds of the 20 tracts of land acquired for ‘Stone Fence Acres L.P.,’ as of December 2021; they total 679.3-acres.

I have seen several pieces of Jeff Koons’ creations, and especially enjoy his inflatable styled artwork; done in stainless steel with transparent color coating. I tend to focus on certain details that remind me of some intricate casting and machining obstacles we had to overcome in the Screw Compressor program at York International Corporation. I admire his skills in creating the inflatables series of artwork, because I appreciate the difficulties that had to be overcome to execute some of those details.

NYC Exhibition of over 120 Artistic Works by Jeff Koons