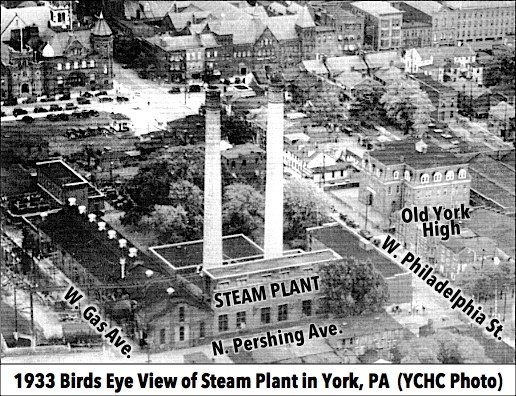 The dismantling of a 54-year-old smokestack in York was the subject of a query with respect to a similar smokestack in Mishawaka, Indiana. The 188-foot high smokestack, at the Steam/Electric Plant in York, was built in 1910 and was dismantled in 1964. In the 1933 Birds Eye View of the Steam Plant, the 1910 Smokestack is towards the left side, nearest to West Gas Avenue.

An E-mail from Red Taylor asked if there were any photos of the 1910 smokestack from the times it was supposedly damaged due to lightning strikes; plus photos when the smokestack was dismantled. The only photo I discovered was the following photo from The Gazette and Daily of July 18, 1964; as the smokestack was being taken-down; one brick at a time.

One of the two smokestacks was being dismantled since both were no longer needed, due to a recent conversion from coal to oil at the plant. The caption erroneously noted the 1910 smokestack was built in 1913. The York Daily of November 29, 1910 reported on the build progress; having already reached a height of 155-feet. The York Dispatch of December 27, 1910 reported the new smokestack was placed in service for the first time last Saturday.

Red Taylor discovered my post in which Sam Mills submitted details about the 1910 Smokestack. Red is gathering background in regards to a big chunk of a similar smokestack in Mishawaka, Indiana; which crashed to the ground on March 20, 2020; per the before and after photos that he provided:

The York Daily of November 29, 1910, reports the 1910 smokestack “is yellow in color and of such pleasing lines that with its symbolizing of York’s industrial supremacy it will appear as an ornament rather than a blot upon the city’s sky line.” The following is the photo submitted by Sam Mills in 2016:

Red Taylor also discovered and provided the following photo of another smokestack with the same ornamental pattern. He was surprised when I informed him it was a view of the 1916 Steam Plant smokestack, which still stands. I believe Bil Bowden took that photo from a crane.

Does anybody know why the ornamental pattern, at the top of the present 1916 smokestack, was painted over?