Earlier this month I was on a Great Lakes Cruise. One stop, in sailing between Lake Huron and Lake Erie, consisted of spending a whole day at the Henry Ford Museum & Greenfield Village in Dearborn, Michigan.

Steam Into History’s York #17, which commenced operating in Southern York County during June 2013, is a replica of a Rogers 4-4-0 Steam Locomotive that would have been built in the 1860s era.  Rogers Locomotive and Machine Works were based in Paterson, New Jersey.  This company built more than six thousand steam locomotives for railroads not only in the United States but also around the world.

The 4-4-0 designation is a classification notation for steam locomotives.  4-4-0 represents the arrangement of 4-leading wheels, 4-powered and coupled driving wheels, and no trailing wheels.  There are a few original Rogers 4-4-0 Steam Locomotives that can be found in museums, such as this one found in the Henry Ford Museum.  This Rogers locomotive has Serial No. 812; it was built for the Atlantic and Gulf Railroad in 1858.

Other relevant posts include:

The Rogers’ Serial No. 812 Locomotive in the Henry Ford Museum was thrice-named.  The original 1858 name was the “Satilla” for the Satilla River along the Atlantic and Gulf Railroad.  The engine was originally built with 60-inch drivers however was later modified to 55-inch drivers after it was acquired by J. J. McDonough Company.  The following 1889 photo is from a plaque next to the engine in the museum.  It appears to show the original, larger, 60-inch drivers still intact. 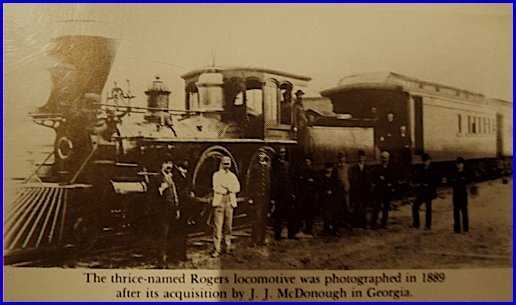 Henry Ford purchased the engine from J. J. McDonough Company in 1924.  Ford renamed the engine the “Sam Hill” for an engineer by that name who had worked on a Michigan Central express train that passed through Dearborn when he was a boy.

The locomotive was renamed “the President” in honor of President Herbert Hoover when it was selected to pull the specially built cars used in 1929 during ceremonies marking the opening of Henry Ford Museum and Greenfield Village.  Its last run was to transport the presidential party to the museum opening in 1929 and has been sitting at that spot in the museum ever since.

The following photo of Steam Into History’s York #17 is a replica of a Rogers 4-4-0 Steam Locomotive that would have been built in the 1860s era.  The replica was fabricated using historical Rogers Locomotive and Machine Works drawings.  I took this photo following one of the earliest June 2013 excursion runs.

Though interpretative re-enactors on the train, travelers can experience York County’s role in Civil War History.  Operated by Steam Into History and in full operation barely two months, they have already taken 10,000 riders over these historic rails.  The excursions travel part of the Northern Central Railway route in York County, one of the targets of Confederate invaders during June of 1863.  President Abraham Lincoln traveled this same route in November of 1863 on his way to deliver the Gettysburg Address.  Lincoln’s Funeral Train traveled the same tracks two years later; I’ll have more on that subject in Monday’s post.

Another Rogers 4-4-0 Steam Locomotive, now found in a museum in Georgia, made an appearance in Central Pennsylvania during 1963.  It is undoubtedly the most famous Rogers 4-4-0 Steam Locomotive due to its central involvement in a dramatic Civil War incident.  I saw it in Gettysburg during the 100th Anniversary Commemoration of The Battle of Gettysburg. The following 1962 postcard shows this locomotive mobbed by a crowd in Kennesaw, Georgia. 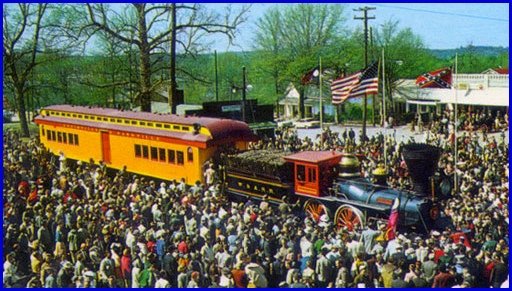 The Rogers’ Serial No. 631 Locomotive was built as Western and Atlantic Railroad’s Engine No. 3 in 1855.  It was named the “General.”  This was the principal locomotive in the Great Locomotive Chase that I wrote about at the end of the post Looking Back on the 100th Anniversary Commemoration of The Battle of Gettysburg; Part 1.

The “General” was discovered on a siding at Vinings, GA in 1892 by E. Warren Clark.  He had the idea of restoring the “General” and exhibiting it at the 1893 World’s Columbian Exposition in Chicago, the first of several sites where it was displayed over the years.

For the Civil War Centennial the Louisville & Nashville Railroad went all-out with the historical display locomotive and reconditioned the “General” to run under its own power.  Its public unveiling was April 14, 1962 at the site where the Great Locomotive Chase began, followed by a series of other Civil War Centennial stops around the country.  The “General” locomotive is presently permanently housed at the Southern Museum of Civil War and Locomotive History in Kennesaw, Georgia.