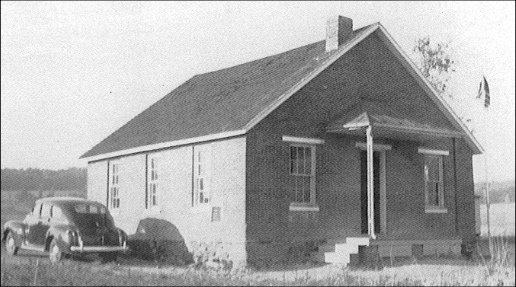 This begins a series researching photos submitted by Elberta Sheffer of students in front of various One-Room Schoolhouses in York County. Some photos had writing on the back. However the majority were just photos; those are the ones where discoveries reveal new connections, thus I’ll look at them first.

Many early One-Room School student photos include a slate containing the school name and year. The photo, being researched, includes girls in the front row holding the sign “Stauffers 1909”:

An index of One-Room Schools indicates two Stauffer’s Schools in York County. One was in Penn Township just north of Hanover and the other was in North Codorus Township along Stauffer Road. There are several ways to determine the correct location associated with the photo under study.

The whole “Stauffers 1909” school photo follows. The back of the photo has a photographer imprint: “Kauffman, 12 W. Market St., York, Pa.”; which was the York Photo Shop of Zacharias Kauffman, Jr. from 1894 to 1911. A York photographer versus a Hanover photographer tends to point to a North Codorus Township location, although that is far from conclusive.

The second slate, in the photo, provided conclusive proof, which resulted in this Stauffer’s School being in North Codorus Township. The slate indicated: “D. W. Zartman, Spring Forge, R. F. D. #3, Pa.” School directories at the York County History Center indicate D. Webster Zartman, residing at a Spring Forge address, is a teacher in the School District of North Codorus Township for the 1909-1910 school year. I’ll examine other ways to make such a determination in future posts.

The photo is divided into thirds to provided better resolution for the 26 students and the teacher. Left side, middle and right side sections follow:

The Gazette and Daily published many student photos from One-Room Schools in the early 1950s; as these schoolhouses were being phased out during school consolidation and modernization. The “P” designation, within a school listing, in the index of One-Room Schools indicates such a photo is included in the “Photo Clippings Notebooks of York County One-Room Schools” at York County History Center (974.841 Y61); such is the case for Stauffer’s School of North Codorus Township during 1908:

The 19 students being taught by Emory Sterner in 1908, increased to 26 students being taught by D. Webster Zartman in 1909. By examining 1910 Census records of the 1908 students, one observes several of their younger siblings beginning school in 1909. I intended to try facial recognition software between the 1908 and 1909 faces, however the program did not like the grainy resolution provided by the newspaper photo. Nevertheless some of the students appear to be recognizable in both photos.

During the 1905-1906 school year, Stauffer’s was one of many one-room schoolhouses in Pennsylvania, where all parents refused to vaccinate their schoolchildren, however Stauffer’s had a most unusual twist.

Stauffer’s One-Room Schoolhouse was sold, for $780, by the School District of North Codorus Township. on September 17, 1953, to the Farmers’ Union Egg Local No. 3; which was established a few months earlier. The schoolhouse was immediately repurposed as the headquarters for that egg marketing Co-op, which served as an agent for egg producers in York and Adams Counties. The Co-op negotiated large-scale sales contracts to major cities along the east coast. The local deducted two cents per crate of eggs sold through the Co-op, as the sole membership fee; which went to organizational and administrative work.

Today, Stauffer’s One-Room Schoolhouse is repurposed as a residence at 2085 Stauffer Road, North Codorus Township, York County, PA. It is likely Stauffer’s School received its name via Samuel B. Stauffer or possibly via taking the name of a neighboring cemetery.

Samuel B. Stauffer owned the land along what is now Stauffer Road in North Codorus Township. A family graveyard, known as Stauffer Cemetery, on his property existed before Stauffer’s One-Room Schoolhouse was constructed. On November 23, 1858, a lot, adjacent to the cemetery, was deeded to the School District of North Codorus Township; and the brick schoolhouse was constructed in 1859.

Samuel B. Stauffer [1790-1860] and his wife Anna [1800-1855] are buried in Stauffer Cemetery. They had a large family. Their fifteen children are: Elizabeth, Jacob, John, Samuel, Mary, Daniel, Anna, Peter, Barbara, Henry, Catharine, Joseph, Abraham, Julia and David. The following photo shows the gravestones that still stand in Stauffer Cemetery; which is located northeast of the former Stauffer’s One-Room Schoolhouse.