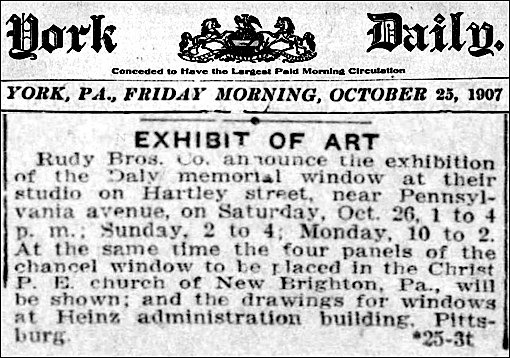 The York Daily reported on an exhibit of stained glass art at the Rudy Bros. Hartley Street studio 108-years ago in this October 25, 1907, article:

Rudy Bros. Co. announce the exhibition of the Daly memorial window at their studio on Hartley street, near Pennsylvania avenue, on Saturday, Oct. 26, 1 to 4 p. m.; Sunday, 2 to 4; Monday, 10 to 2. At the same time the four panels of the chancel window to be placed in the Christ P. E. church of New Brighton, Pa., will be shown; and the drawings for windows at Heinz administration building, Pittsburg.

J. Horace Rudy’s local Rudy Brothers studio was established about 1904; and was located at 601 North Hartley Street, in York, PA. His brothers continued to operate the original Rudy Brothers studio in Pittsburgh; which produced their first stained glass window in 1894. During a recent visit to the Heinz History Center in Pittsburgh, I was told that Rudy Bros. studio in Pittsburgh regularly held exhibits, open to the public. The question was raised, were public exhibits also held at their York studio?

I selected this specific York Daily article because it not only answers the question about public exhibits taking place at the York studio of Rudy Bros., but also answers another question. It is said that H. J. Heinz insisted that all the stained glass produced for him by Rudy Bros. had to be designed by J. Horace Rudy. The question was, is there any evidence that J. Horace Rudy did any designs for H. J. Heinz, after he moved to York? Like I said, the York Daily article answers both questions. 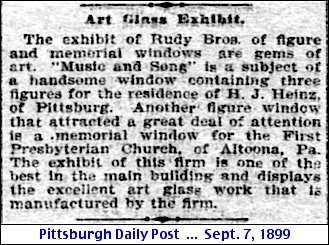 The exhibit of Rudy Bros. of figure and memorial windows are gems of art. “Music and Song” is a subject of a handsome window containing three figures for the residence of H. J. Heinz, of Pittsburg. Another figure window that attracted a great deal of attention is a memorial window for the First Presbyterian Church, of Altoona, Pa. The exhibit of this firm is one of the best in the main building and displays the excellent art glass work that is manufactured by the firm.

Most art works by Rudy Bros. are not signed. However newspaper articles from that time are another source for researchers to utilize; providing evidence of where Rudy Bros. stained glass windows are located.